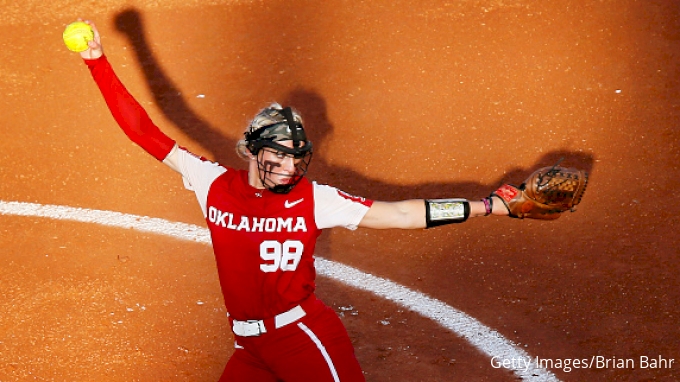 With the college softball season just around the corner, there’s no shortage of great pitchers who will be sitting down batters throughout the 2023 season.

From young pitchers who burst onto the scene last season, to seniors looking to make their marks after a change of scenery, the top pitchers in the country are full of storylines and talent.

Softball also is unique in how pitchers can dominate a game or even season.

Unlike their baseball counterparts, a team can get by with one or two dominant pitchers, who end up throwing the majority of the innings in conference and tournament play.

Here’s a look at 10 pitchers to keep an eye on as the 2023 collegiate softball season draws closer.

The right-hander burst onto the scene last year for the Sooners, joining what already was a loaded team, and giving them one of the most dominant arms in the country.

As a true freshman, Bahl dominated in her first go at the collegiate level, finishing the year with a 22-1 mark. She earned All-America and Freshman of the Year honors.

Perhaps scariest thing for opponents is that she sort of was eased into her role, tossing just 141 innings, but fanning 205 batters on the way to a 1.09 ERA, which included a perfect game against Cal State Fullerton.

Bahl will be the unquestioned ace of the Sooners’ pitching staff this season, and she should see her innings, strikeouts and wins improve.

Coppersmith was part of a strong 1-2 combo for the Retrievers, along with Kya Matter, but it was Coppersmith who took home the ECAC Pitcher of the Year honors.

Despite those sterling marks, she was 11-5 on a UMBC team that struggled at the plate, picking up three of those wins via a perfect game and two no-hitters.

Coppersmith was just as dominant coming on to finish out games, recording six saves last season, which was tied for second most in the country.

Meyer was a workhorse from Omaha last season, logging 178.2 innings of work and giving up less than four hits per game.

Meyer logged a no-hitter and two one-hitters during a dominant stretch of Summit League play.

James dominated the Ohio Valley Conference with a combination of power and control last season on her way to taking home the league’s pitcher-of-the-year honor.

As if that wasn’t impressive enough, despite her power and nearly 200 innings, James walked just 25 batters for the season, finishing the year with a 20-6 record.

While Jordyn Bahl made her mark for rival Oklahoma, Maxwell was every bit as good for Oklahoma State, splitting Big 12 Pitcher of the Year honors and being named an All-American by four different publications.

Maxwell logged nearly 190 innings, struck out 313 batters and saw opponents hit just .133 against her. Each of those marks was among the top 10 in the county. She finished the season with a 21-5 record for the Cowboys.

Kniesche was an All-Midwest Region pick last season, and with good reason, after a season that included one of the most dominant 24 hours in the country.

Another record for TK! 👏

While leading the Jackrabbits to an 18-5 mark that included a 1.42 ERA, Kniesche was the only pitcher in the country last season to record back-to-back no-hitters, blanking St. Thomas on consecutive days. She had three no-hitters for the season.

Those no-nos were part of a year that saw her amass 10 shutouts and 18 complete games, along with 268 strikeouts.

An All-Region pick, along with being the Patriot League Pitcher of the Year, Boaz dominated conference opponents like few others did a season ago.

The senior-to-be was 8-0 against Patriot League opponents last season, seeing her earn Pitcher of the Week five times.

Add it all up, and it was a year that saw her finish 22-6, putting her among the top 10 in wins, post a 1.42 ERA and finish with eight complete-game shutouts.

The reigning Pac 12 Pitcher of the Year did it all in the circle whenever she was needed.

As if her 24-5 mark with 15 complete games was impressive enough, Faraimo also led the country in saves with seven. And that’s in addition to throwing two perfect games.

Megan Faraimo has ice in her veins 🥶

HUGE strikeout with the bases loaded in the bottom of the 5th, then a nuke in the top of the 6th pic.twitter.com/Uog3l3Z8Wb

In total, she finished with just under 200 innings pitched, led the Pac 12 with 292 strikeouts, was a player-of-the-year finalist for the second year in a row and was a selection to the Women’s College World Series All-Tournament team.

On a deep and loaded Bruins team, she’ll be the anchor.

Haendiges is different from every other pitcher on this list in that she is the rare softball pitcher who doesn’t dominate with strikeouts, instead relying on soft contact and the defense behind her.

During her freshman season, she was a second-team Pac 12 pick and made the All-Freshman team after going 13-7 with a 1.68 ERA for the Beavers.

She’s the only pitcher on this list to strike out less than a batter an inning, fanning 133 in 141 innings of work, but walking just 31 batters.

After a season that saw 10 complete games, seven shutouts and three saves, she’s the ace of an Oregon State team looking to make a postseason run.

Perhaps the best pitcher you’ve never heard of, Gottshall dominated the Mid-American Conference last season for Bowling Green, before transferring to Tennessee for her senior season.

At BGSU, she was the MAC Pitcher of the Year, won Pitcher of the Week 11 times, was second in the country in strikeouts (374) and innings (253.1), set a school record with 23 strikeouts in a single game and tossed a perfect game against rival Akron.

She’ll trade in her BGSU orange for Tennessee orange, where she joins a Tennessee team with big SEC and national goals on their radar.