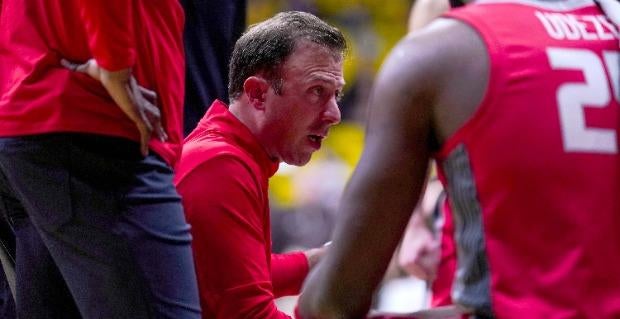 And then there was one: With national No. 1 Purdue being upset at home by Rutgers on Monday night in Big Ten action, the lone remaining unbeaten in men’s college basketball is the University of New Mexico. The Lobos take on Fresno State in Mountain West action on Tuesday with UNM listed as 4.5-point favorites. Oddsmakers aren’t exactly bullish on head coach Richard Pitino’s club to win the national championship or reach a Final Four, however.

Thanks in part to transfers Morris Udeze and Josiah Allick, New Mexico is 14-0 for the second time in program history, topped only by the school-record 17-0 start in 1967-68. UNM has already eclipsed its win total of 13 from last season. Udeze is sixth in the Mountain West in scoring at 15.7 points per game, leads in field-goal percentage at 59.1 and ranks fourth in rebounding at 7.5 per game. Allick is averaging 9.4 points on 57.8% shooting to go with 8.2 rebounds per game (second in the conference). New Mexico has three of the top six scorers in the Mountain West with Jamal Mashburn, Jr. second at 17.1 PPG, Jaelen House third at 17.1 PPG and Udeze sixth.

The Lobos are one of three schools in the nation with three players averaging at least 15.5 PPG (Iona, North Carolina). Between nine returnees and two transfers, New Mexico’s roster averaged a combined 93.5 points last season.

KenPom ranks New Mexico at just No. 57 nationally in large part due to an easy schedule. The team’s best wins have been over Saint Mary’s (trailed by double digits), San Francisco (trailed by double digits) and Iona (coached by Pitino’s father and Hall of Famer Rick Pitino). UNM probably should have lost on New Year’s Eve at Wyoming but escaped with a 76-75 win. It was the Lobos’ first victory when trailing at any point in the final 30 seconds of a game in four years. New Mexico’s 14-game run is the longest win streak in Richard Pitino’s career, dating to his days at Minnesota.

New Mexico’s No. 21 ranking in this week’s Associated Press poll is the school’s highest spot in more than eight years. The Lobos didn’t get a single vote in the preseason poll and were picked fifth in the Mountain West preseason rankings.

Don’t rule out a loss tonight, as New Mexico has dropped six straight overall to Fresno State and its past seven on the road in the series.

Here are the recent schools to be the last unbeaten in the nation and how they fared in the Big Dance: