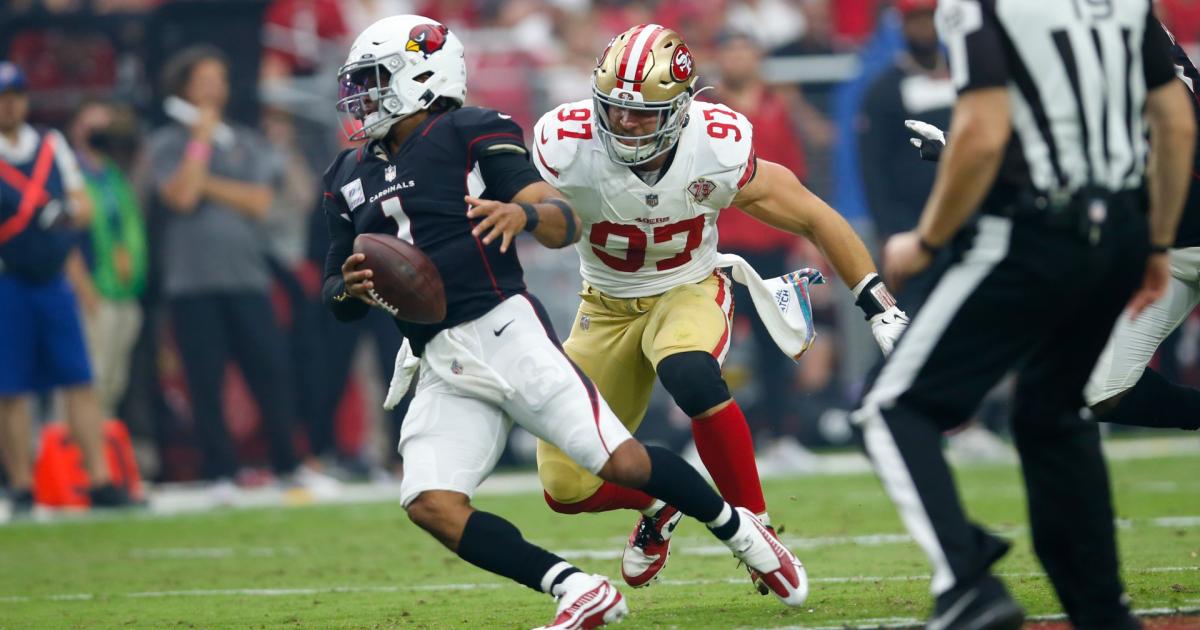 The Cardinals kept their playoff aspirations alive — while also burying an NFC West foe — with a win against the Rams last week. This week, they’ll have to face another division rival and one of the NFC’s best teams.

Arizona will “host” the 49ers in Mexico City on “Monday Night Football,” with plenty riding for both teams. The Cardinals (4-6) need as many wins as possible to get back into the playoff race. The 49ers (5-4), fresh off a “Sunday Night Football” win against the Chargers, would tie the idle Seahawks for the division lead with a win.

MORE: Zach Ertz out for season after suffering knee injury vs. Rams

Both teams came into the year with lofty expectations for their offenses, but while the 49ers’ stars have kept San Francisco near the top in yards per play (sixth at 5.9), the Cardinals have struggled, ranking 29th at 4.9. That is due largely to their troubles in the passing game; Arizona was averaging 5.2 net yards per attempt, which ranked 31st in the league entering Week 11.

And the matchup against the 49ers could be a bit of a mismatch for the Cardinals, who may not have Murray (hamstring) under center. San Francisco’s defense is seventh in lowest net yards per attempt at 5.6. According to Football Outsiders, Arizona ranks 29th in passing offense DVOA while San Francisco ranks 10th in passing defense DVOA.

Here’s all the information you need to live stream 49ers vs. Cardinals.

“Monday Night Football” can be streamed using ESPN.com, the ESPN App or ESPN+, or with fuboTV, which carries the ESPN family of networks and offers a free trial.

The 49ers-Cardinals “Monday Night Football” broadcast will feature Joe Buck on play-by-play and Troy Aikman as a color commentator. Lisa Salters will report from the sideline.

There is no alternate “Manningcast” in Week 11. “Monday Night Football with Peyton and Eli” will return in Week 13 when the Saints travel to Tampa to face the Buccaneers.

Viewers in Canada can watch the game on TSN1/3/4 (English) or RDS2 (French), or stream it on DAZN, which features every NFL game.

How to watch NFL ‘Monday Night Football’ games without cable

ESPN is the home of “Monday Night Football” again in 2022. Viewers will be able to stream the series on ESPN’s website and app in addition to the streaming services below.

ESPN will carry all “Monday Night Football” games in 2022, with Buck, Aikman and Salters on the call each week.

The games can be streamed on ESPN+, ESPN.com and the ESPN App, or with fuboTV, which offers a free trial.