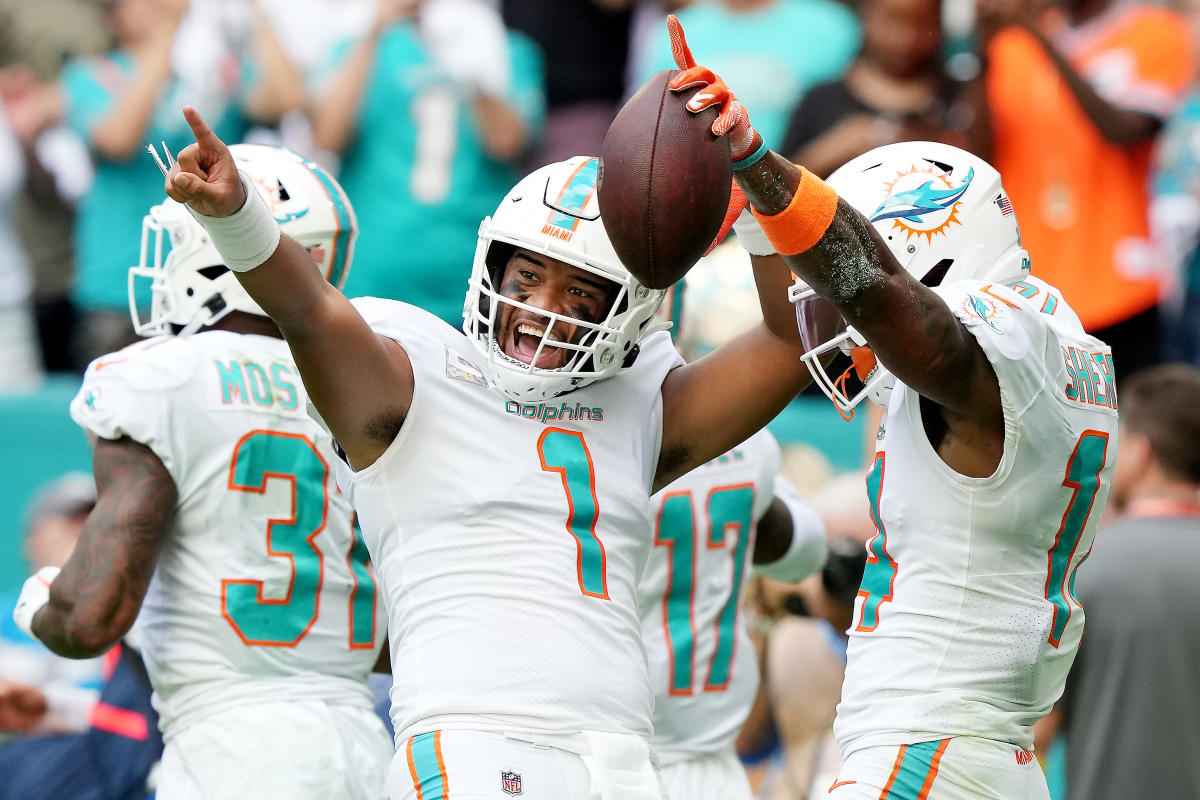 Let’s try to focus on a few stats for which we are thankful this week. Behold, a cornucopia of NFL goodness…

65.6 – Tua Tagovailoa has completed 65.6% of pass attempts traveling 20-plus yards downfield according to PFF, the best rate in the league by far — and two of his 11 incompletions on such throws were classified as drops. It’s hard to overstate just how silly that completion percentage truly is; Kyler Murray led all passers in deep accuracy last year at 49.3%. Six of Tagovailoa’s 31 deep shots have resulted in touchdowns so far. Say whatever you want about his arm strength relative to other NFL quarterbacks, but there literally has not been anyone better on deep shots this season.

58 – After forcing another five missed tackles on Sunday, Josh Jacobs now leads all running backs with 58 on his 183 carries this year. This shouldn’t come as any great surprise because he’s ranked among the leaders in this area in every healthy season of his career. And yet, for various Josh McDaniels and/or Hall of Fame Game-related reasons, people were running away from Jacobs in fantasy drafts. When all the numbers are finally in, he’s going to end up being perhaps the biggest draft steal in our game. Jacobs is just objectively great as a runner and he’s on pace to establish new career highs across the board.

44 – Ever since the one-catch, three-yard performance in Week 8 that left you seething, Davante Adams has been an unstoppable force. He’s seen a ridiculous 44 targets over his last three games, hauling in five touchdowns while averaging 8.7 receptions and 137.7 yards per week. His target share is an absurd 39.7% during this stretch. Denver’s pass defense is among the NFL’s best, but it had zero answers for the game’s greatest receiving technician on Sunday afternoon:

15.5 – Over Brandon Aiyuk‘s last five games, he’s averaging 15.5 fantasy points in Yahoo default scoring, which, of course, places him among the WR1s. He’s seen 39 targets during that stretch, scored five touchdowns and topped 80 receiving yards four times. We basically need to treat Aiyuk and Deebo Samuel as receivers with roughly equivalent fantasy value rest-of-season, slotting each among the top 20. It’s another DK Metcalf–Tyler Lockett situation, with no wrong answer.

14.7 – Chris Olave‘s average depth of target is 14.7 yards per attempt through 10 games, second highest in the league among players who’ve seen at least 50 chances. He’s been an air-yards monster all season and he leads all rookies in receiving yardage by an obscene margin (233 more yards than Garrett Wilson). It isn’t normal for a first-year wideout to make it look this easy:

Given Olave’s skill level and the nature of his targets, it’s easy to imagine that the best games of his rookie season are actually still ahead.

9.5 – Christian Kirk has drawn 9.5 targets per game over his last four, rebounding after an out-of-character one-catch performance in Week 5. Kirk has already set a new single-season high in TD receptions (7) and he’s on pace to destroy his career bests in yardage and total catches. He has a series of spectacular matchups ahead (Baltimore, Detroit, Tennessee) and he gets Houston in Championship Week. We use the term “league-winner” a little too frequently in fantasy, but there’s at least a chance it will apply to Jacksonville’s No. 1 pass-catcher.