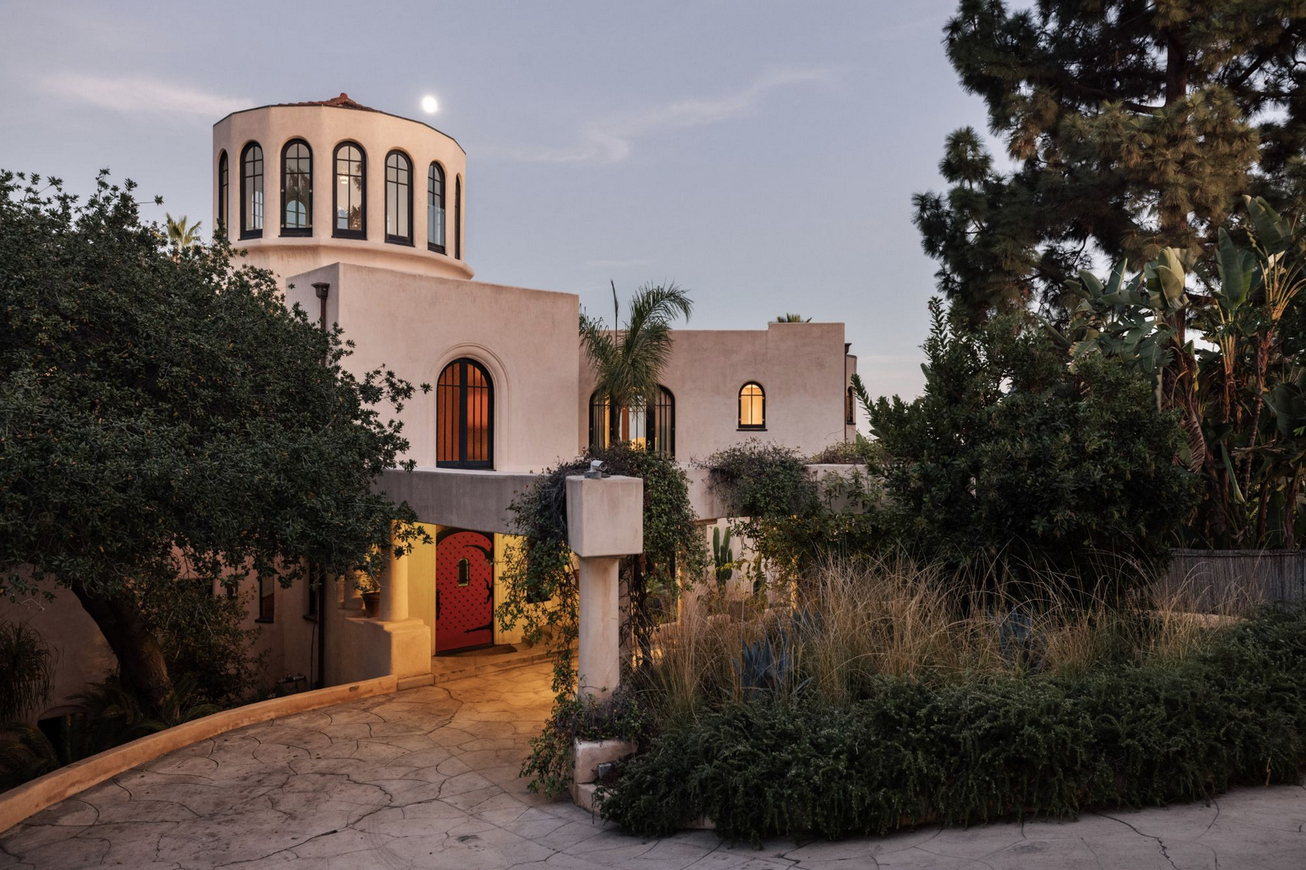 PERCHED HIGH ABOVE THE CITY, a grand Mediterranean villa in the Los Angeles neighborhood of Los Feliz changed hands, selling artist to artist for nearly $10.3 million. The buyers were married LA artists Jonas Wood and Shio Kusaka, and the seller was Muna El Fituri. The transaction was first reported by the real estate website Dirt.

Libyan-born, El Fituri is an artist and art therapist. She shared the home with her partner, British sculptor Thomas Houseago. Over the past several years, the artists have been collaborating, with El Fituri expanding her practice to include photography and filmmaking to document Houseago’s creative process.

Designed by architect A.F. Leicht in 1924, the castle-style residence is sited on nearly two acres of gardens and natural landscapes. Boasting five bedrooms and seven baths over more than 5,500 square feet, the dramatic interiors include curved and gilded ceilings, arched doorways, and art nouveau design and architectural accents.

There’s a music studio, guest house, basketball court, and a circular motor court at the entry. A turret functions as an observation tower, providing access to the expansive rooftop terrace where the spectacular, panoramic views of downtown LA, the Santa Monica Mountains, and the Pacific Ocean rival those of nearby Griffith Observatory.

In 2014, El Fituri bought the house from oil heir John Gilbert Getty for $8.3 million—a neighborhood record at the time, according to Dirt. Flea of the Red Hot Chili Peppers sold it to Getty. Previously, dating back decades, a succession of creative residents including Bob Dylan, Andy Warhol, and the Velvet Underground have called the unique residence home.

El Fituri made the purchase after her parents died. Her father was Libyan and her mother was Polish. She told W magazine she was drawn to the property because the house and grounds are reminiscent of her childhood growing up in Europe. She earned an undergraduate degree in psychology from Williams College. Fluent in seven languages and living in New York City, she worked for a dance company and as a translator and then decided to go to graduate school and study art therapy.

Her ex-husband is Okwui Enwezor (1963-2019), the internationally renowned curator and critic who emphasized the cultural complexity of the Africa continent and pushed the contemporary art world to break out of its Western orientation.

El Fituri and Houseago met in 2013. Houseago is represented by mega gallery Gagosian. Working with wood, clay, plaster, and bronze, along with hemp and rebar, he makes monumental sculptures, often rough-hewn, broad-shouldered figures inspired by African sculpture, Cubism, popular culture, and Futurism. “By tapping into the nuanced legibility of the human form,” his gallery bio states, “Houseago’s figures oscillate between states of power and of vulnerability.”

The central hall is a nexus of dramatic arched doorways, pillars, and a grand curved staircase. | Alex Zarour/Virtually Here Studios

A profile of Houseago by Susan Morgan, published by W in 2018, details the couple’s first encounter at an art industry dinner:

“I really was on the edge of the edge, walking the plank in my life,” he remembers, summing up a period of personal discontent and tragic loss topped off by a hammering review in The New York Times (“He needs therapy” was a line that stuck). “I was about to walk out of the dinner, and I literally saw an open seat. Like a dumb animal, I thought, That feels warm. So I went over to sit down.”

El Fituri sensed “this insane ball of energy” hurtling across the room toward the spot next to her, so she swiveled her chair and dove deeper into conversation with her friend the artist Lorna Simpson. When Houseago piped up to interrupt, her innate politeness kicked in and she turned to speak with him: When she mentioned that she was an art therapist, he replied that he could use some therapy.

A major collaborative project, “Untitled, 2020. Three perspectives on the art of the present,” was conceived and co-curated by Caroline Bourgeois, El Fituri and Houseago at the Pinault Collection – Punta della Dogana in Venice, Italy. The group exhibition “explores the genesis and evolution of the creative process” and featured 67 artists including Houseago and El Fituri. Several of his sculptures were on view and a site-specific installation recreating his studio anchored the show.

Fituri contributed “Cast Studio” (2018), a series of photographs and a film recording Houseago in the throes of production. The exhibition guide described the nature of the works:

These remarkably intense photographs and film allow us to better grasp the physical implications of this work, and also to better understand the atmosphere of creation in which the sculptor lives and works. As the chosen witness of Thomas Houseago’s work, El Fituri shows us its performative aspect: we see the artist in his studio, physically immersed in his labour, in his art, and everything is vitality, strength and childlike glee at the physical contact with the material being discovered.…

What El Fituri photographs and films is her own view of the artist, who becomes a metaphor for his studio, the centre-point of his “existence,” “where everything happens,” but she also captures the
outcome of their countless conversations over the years. Cast Studio embodies the artist’s ideas on sculpture and on his fundamental interaction with the public.

FIND MORE “Untitled, 2020. Three perspectives on the art of the present,” was on view the Pinault Collection – Punta della Dogana in Venice, Italy, from July 7-Nov. 4, 2020

Incredible panoramic views of Los Angeles can be seen from the spacious rooftop terrace, which is accessed via the home’s turret. | Alex Zarour/Virtually Here Studios

A virtual tour of “The Castle” in the Los Feliz neighborhood of Los Angeles reveals the grand property’s dramatic interiors and spectacular views. | Video by Ernie Carswell

BOOKSHELF
The exhibition catalog “Thomas Houseago: Untitled: 2020” is co-edited by Thomas Houseago, Caroline Bourgeois, and Muna El Fituri. An exhibition guide was also published to accompany the exhibition, “Untitled, 2020. Three perspectives on the art of the present.” Documenting his 2022 exhibition at David Kordansky Gallery in Los Angeles, “Jonas Wood: Plants and Animals” is forthcoming in March. Forthcoming in June, “Shio Kusaka: one light year” documents the artist’s recent gallery show at David Zwirner New York. Also consider, “Jonas Wood and Shio Kusaka: Blackwelder.” The Phaidon Contemporary Artists Series has published volumes on Jonas Wood and Lorna Simpson. The recently published volume “El Anatsui: The Reinvention of Sculpture” was co-authored by Chika Okeke-Agulu and Okwui Enwezor. The exhibition catalog “Grief and Grievance: Art and Mourning in America (from Civil Rights to Black Lives Matter)” was co-edited by Enwezor and accompanied the exhibition he conceived.

SUPPORT CULTURE TYPE
Do you enjoy and value Culture Type? Please consider supporting its ongoing production by making a donation. Culture Type is an independent editorial project that requires countless hours and expense to research, report, write, and produce. To help sustain it, make a one-time donation or sign up for a recurring monthly contribution. It only takes a minute. Many Thanks for Your Support.