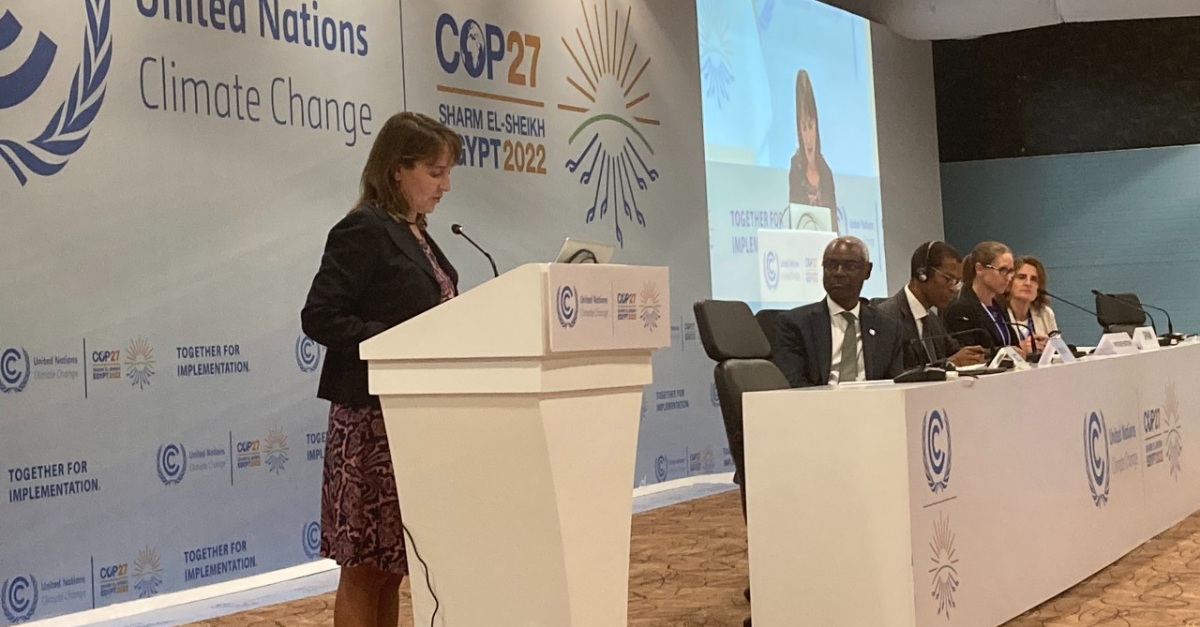 SHARM EL SHEIKH, Egypt — Assistant Secretary for Water and Science Tanya Trujillo represented the Department of the Interior at the 27th Conference of the Parties (COP27) of the United Nations Framework Convention on Climate Change in Sharm El Sheikh, Egypt last week to showcase the Biden-Harris administration’s all-of-government approach to tackling the climate and drought crises and collaborating with global leaders on hydrologic science and drought resilience efforts.

Throughout the week-long conference, Assistant Secretary Trujillo participated in collaborative meetings with global leaders and exchanged information about the tools available to utilize science-based solutions to manage water shortages and climate extremes.

On “Energy & Action for Climate Empowerment Day,” she spoke at the “Global Action for Drought Resilience, International Drought Resilience Alliance (IDRA) High Level Ministerial Side Event,” where she reiterated the United States’ support for the IDRA and confirmed the US commitment to recognizing water resilience as an important issue of global security. Assistant Secretary Trujillo highlighted the Administration’s focus on using the best available science and nature-based solutions for water management, as well as efforts to ensure historically marginalized communities benefit from the Department’s drought mitigation efforts.

On “Biodiversity, Oceans and Transport Day,” Assistant Secretary Trujillo delivered remarks at “Climate science, data, and ecosystem management: Evidence-based approaches to biodiversity conservation” to showcase the Department’s efforts to increase biodiversity, including work being done by USGS through Climate Adaptation Science Centers as well as at the U.S. Fish and Wildlife Service.

On “Solutions Day,” she joined the first-ever Ministerial Meeting on Urbanization and Climate Change to deliver remarks on the work the United States is doing to prioritize the development of sustainable communities through climate resilience and updated infrastructure, including in historically marginalized communities. She also highlighted the progress made to deploy clean energy and address the worsening drought crises.

Assistant Secretary Trujillo delivered congratulatory remarks at a signing ceremony between Israel and the Kingdom of Jordan of a historic Joint Declaration of Intent on cooperation in the restoration of the Jordan River – an important goal for both countries due to its rich historical heritage, its importance as a main tourism site, as well as its high ecological value.

She also participated in “Climate Action Everywhere: Multi-level Governance to Deliver for America,” where she discussed the impacts of President Biden’s Bipartisan Infrastructure Law and Inflation Reduction Act funding on climate resilience efforts and on the importance of working with state and local partners in implementing the solutions. Taken together, these laws represent the largest investments in climate resilience in the nation’s history and provide a once-in-a-generation opportunity for the work of the Department.