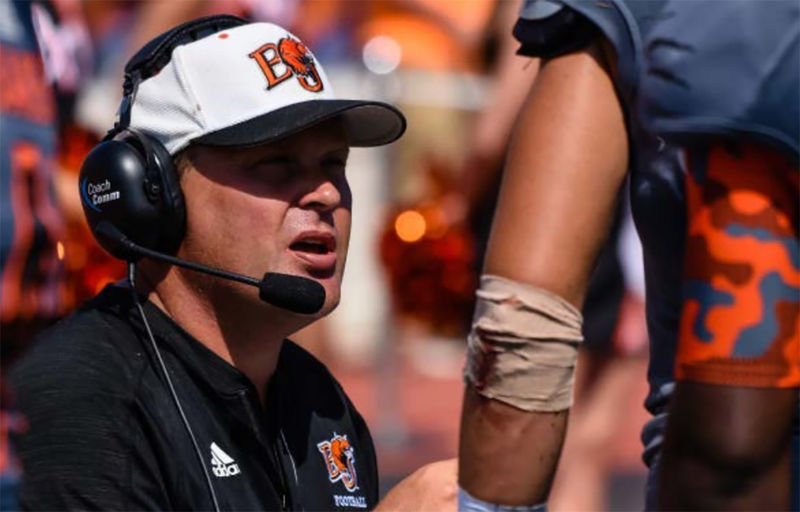 BALDWIN CITY, Kan. – Baker University Athletics has announced that Jason Thoren has decided to step down as head coach of the Baker football program and has accepted a position at an NCAA Division I program. Baker assistant coach, Brian Boyle will serve as interim head coach.

“I would like to thank Dr. Lynne Murray and Nate Houser for giving me the opportunity to lead the Baker University football team,” said Thoren. “In 19 seasons at Baker, I have had the honor to coach and work with so many great people. I will leave Baker University with a lifetime of memories and friends.”

During Thoren’s tenure at Baker, the Wildcats won seven Heart of America Conference Championships and earned nine NAIA Playoff appearances. He was a part of the 2016 team that reached the NAIA Championship game for just the second time in program history. During an eight-year stretch from 2013-2020, the Wildcats made it to the NAIA Quarterfinals in five separate seasons.

In his first three seasons as head coach, Thoren won 25 games and held an impressive 13-1 record in conference play which featured a 12-game winning streak against Heart South opponents. The 2019 team finished 9-4 and reached the NAIA Playoffs while the 2020 team followed with another playoff appearance where they advanced to the quarterfinals.

With Thoren at the helm, the Wildcats have boasted 71 all-conference selections and a three-time NAIA All-American in J.D. Woods, who was also named the Heart of America Conference Player of the Year and Offensive Player of the Year in consecutive seasons in 2020 and 2021.

“Coach Thoren has been a cornerstone for the Baker football program and a tremendous asset to the athletic department and university as a whole for many years,” said Baker Director of Athletics Susan Decker. “His success on the field speaks for itself, but his strength of character and leadership is unmatched.”

Prior to his time as head coach, Thoren served 15 seasons as defensive coordinator where he built a strong resume. Under his direction, the Wildcat defensive tradition had been built to consistently perform as one of the top units in the NAIA. In BU’s NAIA national runner-up season in 2016, Darrian Winston led the country in interceptions with 10 and Baker led the nation in turnover margin at +23. From Sept. 28 through Nov. 23, the 2013 Baker defense allowed just 11.6 points per game in a stretch of nine-straight wins, including a 10-7 NAIA FCS Playoff win over Sterling. In 2009, the Baker defense finished the season ranked 6th in the NAIA in total defense (262.9), 7th in the NAIA in pass defense (153.8) and 7th in the NAIA in turnovers forced (31).

Before coming to Baldwin City, Thoren spent three years as a graduate assistant working with the offensive line and tight ends at NCAA Division I University of Minnesota.

The Lawrence High product was a starting linebacker for the Kansas Jayhawks from 1994 to 1997 where he was an All-Big 8 and All-Big 12 selection. Thoren ended his Jayhawk career with 306 total tackles. During his high school playing career, Thoren was the recipient of the Simone Award which is given to the most outstanding high school player in the Kansas City metropolitan area.

“We are saddened to see Coach Thoren go and we are excited for what his future will bring,” added Decker. “He leaves behind shoes that will be hard to fill, but we will look to find a coach that can come in and carry on the success of the program and be a leader for our university.”

Coach Boyle moves into the interim role after spending 14 years on the Baker staff. He has previously served in roles as defensive coordinator as well as a defensive line coach.

Boyle, a former Wildcat defensive end, was a standout player during his playing days at Baker. In 1993, he was a starter on the Final Four team that was coached by Baker Hall of Famer Charlie Richard. Then in 1994, Boyle was named First Team All-Conference.

Baker will begin a national search for its next head coach immediately.