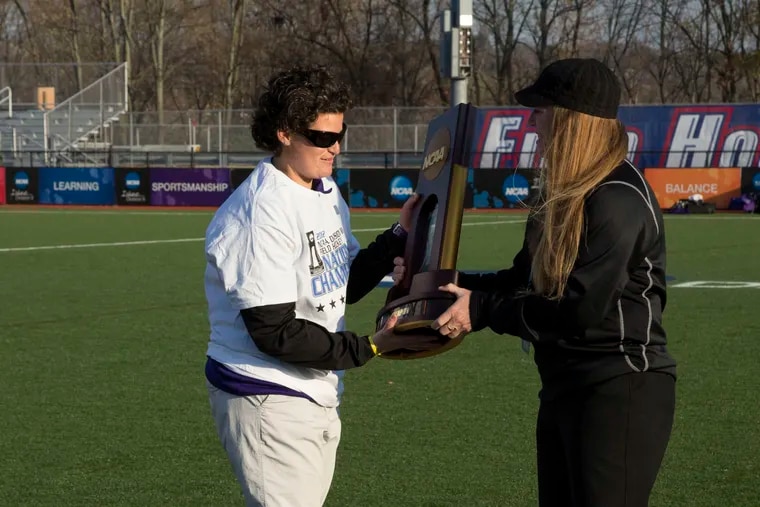 Herman Boone never caved in the famous 2000 film Remember the Titans. Even at the height of challenges, Boone, portrayed by Denzel Washington, told coach Bill Yoast (played by Will Patton), “I’m a winner. I’m going to win.”

It was those qualities that reminded Nicole Fiorilla, a West Chester field hockey assistant coach, of Amy Cohen when the latter took over the head coaching position in 2011.

“Amy wanted to win,” said Fiorilla, who was a junior standout at the time. “I know, it seems like a simple answer that every player would say about their coach, but you could feel it, we could see it, and we started winning.”

A few blocks over, Betty Ann Kempf Townsley has been leading the charge for the women’s soccer program for 15 seasons. And this year the Rams field hockey and women’s soccer programs reached the NCAA Division II Final Four in Seattle. The soccer team also won the Pennsylvania State Athletic Conference.

While there are plenty West Chester alumni who have established great success in the women’s college coaching world — like Tina Sloan-Green, Cathy Rush, Geno Auriemma, and Vonnie Gros — these two women have found their home with the Rams over the years and are leaving quite the imprint.

Behind the wins, accolades, and records, Kempf Townsley and Cohen have built a culture, one that’s backed by trust, mentorship, and community. It wasn’t easy getting there. They navigated through universities lacking opportunities for female leadership in the NCAA — and in some cases leading them to start a program from scratch — but, along the way, the two have guided other female athletes with the hope they’ll continue the cycle.

“We need to keep creating opportunities for young female athletes in all sports,” Kempf Townsley said. “It not only enhances their game, but it enhances their lives. They’re going to be a force to be reckoned with.”

Kempf Townsley grew up with a soccer background. Her father moved to the U.S. from Europe after World War II and carried soccer culture into his family. However, soccer was a male-dominated sport at the time, leaving few opportunities for girls like Kempf Townsley.

“I can remember being a child and my mother dressing me up in dresses,” Kempf Townsley said. “All I wanted to do was run around and play soccer and kick the ball.

“There were really no women in our high school that knew anything about going on to play soccer at the next level. … Because in those days, it was very rare that even a female could go on to college … let alone play a sport.”

Kempf Townsley attended the now-defunct Cardinal Dougherty High School. She then went to Immaculata, where she played field hockey and basketball. Both schools didn’t offer a women’s soccer program, so when Kempf Townsley’s college career came to an end, her mission became to expand the sport.

She built the first girls’ soccer team at her alma mater, Cardinal Dougherty, in 1982 and then began the women’s soccer program at La Salle in 1986, marking the start of her collegiate coaching career.

“I really did not know anything about NCAA rules or regulations,” Kempf Townsley said. “I was handed a bag of balls and said, ‘OK, you’re starting the program,’ so I kind of had to find my way. I had to teach myself. I had to learn on my own and just grow with the program. I grew as the program grew.”

Her position at La Salle was part-time, so Kempf Townsley taught at Saint Cecilia’s during the weekdays and coached the Explorers afterwards.

Besides working with a lack of budget, the biggest challenge, Kempf Townsley said, was overcoming the doubt of starting a team and recruiting young women to take a chance on a team that wasn’t established.

“In those days, it took young females with strength and character to be able to take on that opportunity,” Kemp Townsley said. “I was blessed with some really great athletes and young women who wanted to take that ride.”

In the early ‘90s, though, the landscape for college coaches changed. More full-time positions were available, especially in women’s sports. In 1994, Kempf Townsley was offered the head coaching position at Seton Hall, where she coached for 13 years.

“That was a huge time. It happened in so many universities,” Kempf Townsley said. “Just to make a statement that we’re hiring a full-time coach was a big commitment for any university. But you could see the change in women’s soccer.”

While the female college coaching scene was expanding, more schools had opportunities for assistant and head coaching positions. But there also was a sense of community being built among coaches in the Philly area.

It became a form of networking, and that’s how Cohen landed her position at West Chester.

After graduating from Lafayette College, Cohen, a Linwood native, knew she wanted to be a coach. She went on to serve as a graduate assistant, which eventually turned into a full-time assistant job at the University of Delaware. Then in 2006, she landed her first head coaching position at Division III Susquehanna University.

One day, Cohen’s closest friend, Drexel head field hockey coach Denise Zelenak, called Cohen saying, “I have the perfect job for you.” She went on to explain how her alma mater, West Chester, had an opening at head coach.

Cohen was ecstatic, but she would be taking over a program that was transitioning from Division I to the Division II. And some players weren’t thrilled about it.

“They didn’t have a say whether they were going to be Division I or Division II,” Cohen said. “They were basically told one day like, ‘Hey, now you’re going to be a Division II program,’ And I think they really struggled to accept that. The team, quite frankly, was pissed. I’ve got a pretty big personality, and I had some ideas on how we’re going to change that.”

Establishing a culture was a huge part of how Cohen ran her team. She was disciplined and preached togetherness. But it was that mentality that connected the team, Fiorilla said, since they became closer in a way they weren’t before.

And it showed on the field. During Cohen’s first season, the Rams finished 17-4 and won the NCAA championship. She’s since won three NCAA titles and made nine appearances.

“My first year, we beat the 2010 national champions. They hadn’t lost in 20-something games in over two years,” Cohen said. “You have an idea what you’d like your culture to be, but ours happened to be winning. I think success breeds success, and the success of winning brings in the players that want to be here. It’s certainly a tight-knit community.”

Cohen and Kempf Townsley have built a name for themselves in West Chester athletics.

“The trust has been built,” Fiorilla said. “We have to trust our head coach to get us to win games, and Amy has continuously done that.”

Kempf Townsley came to West Chester in 2007 and took over a program that was founded by her husband, Ed, in the ‘90s. She’s since compiled four PSAC titles, six region titles, and 15 NCAA appearances.

It was her great success that caught the attention of young athletes in the area.

Scarlett Walsh, a Northeast native and Archbishop Ryan graduate, remembers being told by the late legendary FC Bucks youth soccer coach Ed Leigh that Kempf Townsley’s program is one you would want to compete for.

“I really liked how she’s so confident,” Walsh said. “When you’re in a room with her, you can feel her passion is just very contagious. You’re excited to be there.”

The thought about being a coach didn’t cross Walsh’s mind until she got to West Chester. Kempf Townsley was the first female coach she’d had in the sport, and it empowered her to want to be the first for other female athletes.

“Betty Ann created this great program,” Walsh said. “It was inspiring. and she’s helped me transition into my coaching career. She’s given me advice, and she’s always someone I looked up to, and still looking up to now.”

Over the years, Cohen also has had numerous former players go off into the coaching scene or even join the program as volunteer and assistant coaches. Currently, each staff member — Fiorilla, Gabby Panasiewicz, and Caitie McNamara — are former Rams.

“You take such pride and joy to think maybe you did something right when they want to come back and be coaches,” Cohen said. “We have so many coaches out there. It’s not just college coaches. I have so many players that our high school coaches, club coaches.”