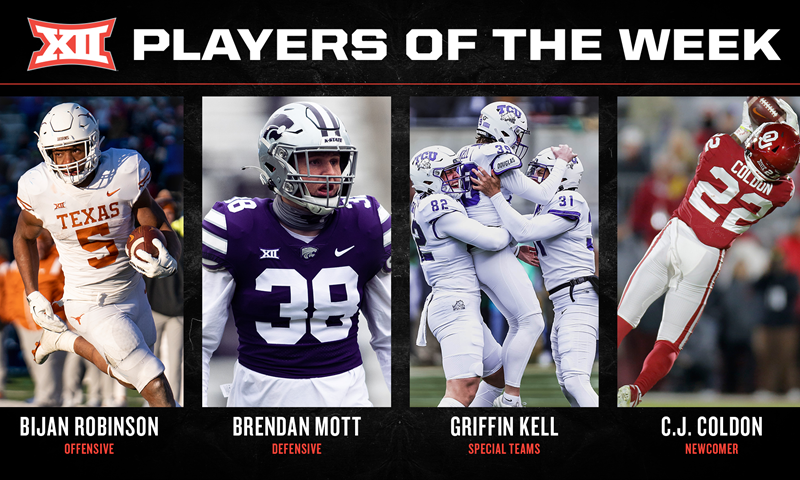 Robinson rushed for a career-high 243 yards on 25 carries (9.7 ypc) and a career-best four touchdowns in leading Texas to a 55-14 road victory over Kansas. It was his eighth 100-yard rushing game in the last nine outings and second of 200 in the last three. He’s also has rushed for a touchdown in nine of 11 games this year. Robinson is now tied for fifth on Texas’ all-time rushing list with 3,231 yards. The junior is sixth in UT history in career tandem yards (4,036) and 10th in all-purpose yards (4,052). This season, Robinson is the only player in the nation with more than 1,400 rushing yards and 300 receiving yards, and one of just two running backs nationally with double-digit rushing touchdowns and at least two receiving scores. In the game against Kansas, Robinson scored four of Texas’ first five touchdowns in pushing the Longhorns out to a 38-0 lead early in the third quarter. Two of the touchdowns went for more than 15 yards, including his last one of 32 yards. Just before halftime, he had a 24-yard carry that was inches short of a touchdown with one second remaining before he vaulted over the line on the next play as time expired for a 31-0 halftime lead. Robinson’s 32-yard touchdown run was his sixth rushing touchdown and seventh scoring play of at least 30 yards this season. His 243 yards rushing were the 16th-most in a game in UT history.

Mott carded career-highs in tackles (8), solo tackles (5) and sacks (3.0) in K-State’s 48-31 win at West Virginia. His sacks total tied for the fourth most in school history and the 12th most in the nation this season. It is the third time this year a Wildcat had 3.0 sacks in a game as K-State is one of only two teams (San Jose State) to have three players with 3.0-sack games this season. Mott also pressured the quarterback on an interception by Cincere Mason that was returned 37 yards for a touchdown.

With no timeouts and the final seconds ticking off the clock, TCU’s field goal unit ran onto the field with Kell converting a 40-yarder as time expired for a 29-28 win at Baylor. It was his only field goal attempt of the game and kept the Horned Frogs undefeated on the season.

Coldon registered seven tackles (six solo), an interception and three pass breakups in Oklahoma’s 28-13 win over Oklahoma State. His interception was the first of OU’s four on the night and the three breakups were his firsts of the season. The senior CB helped the OU defense hold the Cowboys to a .537 completion rate and 4.7 yards per play. OSU had 18 possessions and scored just one touchdown. Coldon, who transferred from Wyoming, leads the Sooners with a career-high three interceptions this season.

Big 12 Football Players of the Week