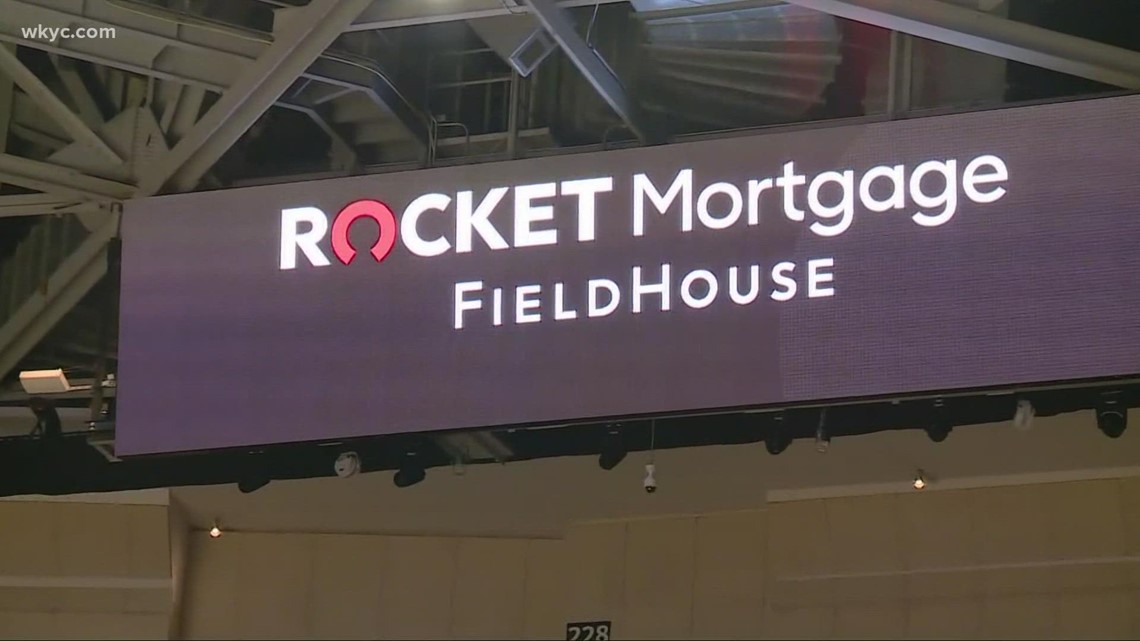 The Cavs are the latest professional franchise to double down on the burgeoning, multi-billion dollar sports gambling industry, once deemed taboo and now trendy.

CLEVELAND — The action at Cleveland Cavaliers games from now on won’t be limited to dunks, layups, 3-pointers and anything else happening on the court.

With sports gambling becoming legal in Ohio on Jan. 1 at midnight, the NBA team is opening a stylish, two-story sportsbook inside Rocket Mortgage FieldHouse, where fans can wager on games across the country — along with the one they’re attending.

Partnering with Caesar’s Sportsbook, the Cavs are the latest professional franchise to double down, so to speak, on the burgeoning, multi-billion dollar sports gambling industry, once deemed taboo and now trendy.

After decades of reservations about whether to accept gambling, the NBA, NFL, NHL and MLB are all in. Money talks.

“This is where it’s headed,” Nic Barlage, CEO of the Cavaliers, Rock Entertainment Group and Rocket Mortgage FieldHouse, said while pointing toward one of the many large-screen TVs ringing the 10,000 square foot space outfitted with bars, betting kiosks and windows.

“Everything is becoming gamified.”

Cleveland’s in-arena sportsbook is one of just a handful currently operating nationwide, but there are more planned as additional states legalize gambling.

While widespread in Europe, the in-arena, full-service sportsbook didn’t debut in the U.S. until 2021, when the Washington Wizards opened one at Capital One Arena. Arizona was quick to follow with betting services at Suns, Mercury and Diamondbacks games.

The New York Mets have a Caesars Sportsbook at Citi Field, but it’s only a lounge and club space, where fans can use their mobile apps to place bets. Others will become more the norm than exceptions in coming years.

The success in Washington intrigued the Cavs, who recognized a new financial opportunity for their downtown arena when Ohio became the 33rd state to legalize gambling two years ago following a prolonged legal battle.

Cleveland’s facility will be operate seven days a week, 362 days per year. Not only will it be open during Cavs games to fans 21 and over, but every event at the arena from concerts to pro wrestling to Disney on Ice.

Recognizing a shift in the interests of today’s fan, the Cavs and other teams are adjusting to this new frontier in sports entertainment.

Going to games isn’t enough for some fans. They want to be involved on other levels with some looking to invest more than just their hearts into the home team.

“When we talk to our partners in D.C., the narrative around games has become one of like, ’What’s the parlay? What’s the over/under? What’s it going to be this quarter?'” Barlage said. “Fans have become so educated in regards to all these nuances around sports betting.

“It has literally worked into a fan’s experience now, that vernacular. So you want to be able to offer an amenity that captures that for the betterment of your partners and strategically.”

The team expects the sportsbook to attract the ardent gambler and maybe entice the casual fan to drop a couple bucks on a game.

“We want to be very clear: We view this as a fan experience, a fan amenity and a fan-engagement opportunity,” Barlage said. “Those are the things that stand true to us in this whole thing.

“In regards to the betting part, if we can help our partners at Caesar’s convert more people into sport betting, it just helps our ecosystem. We both want to do it responsibly. We don’t want to do it in an irresponsible way that creates this ripple effect.”

Accessible inside the arena’s enormous glass atrium and via a street entrance for those not ticketed for an event, the Caesar’s Sportsbook in Cleveland looks like a Las Vegas casino floor, minus the blackjack and roulette tables.

There’s an enormous circular bar on the upper level with windows providing natural light and stunning views of Cleveland’s west side.

“It’s going to feel like a high-end sports bar where you’re going to be able to place bets,” Barlage said, noting that fans also can dine on a food menu comprised of the arena’s best offerings.

And if fans needed a reminder, the wall just inside the sportsbook’s front entrance says: Eat. Bet. Cheer.

While knowing there may be a need to tweak hours and other aspects in the near future, the Cavs are confident initial curiosity along with a crammed sports calendar — NFL playoffs, March Madness, Cavs games — in early 2023 will drive interest.

“The first five months of this thing could be pretty unique and special,” Barlage said. “Beyond that we have to think about it, but then you transition into baseball and all those things.”