Using and understanding data science is essential to being successful in almost any industry—from energy to filmmaking. That’s a lesson learned firsthand by Allen Gilmer, the founder of Enverus, a leading energy industry software as a service platform in Texas.

“Data science is something that’s quite interesting to me … and I knew how important it was working in my neck of the woods, but what I didn’t really quite understand was how important it is right now to everything,” said Gilmer, who presented the Clavius Distinguished Lecture at Fordham on Nov. 16—the first held since the COVID-19 pandemic.

“It is really the glue, the binder of nearly every academic department— from English to psychology to biology to the hard sciences. It is opening up profound new venues across the board.”

Held in Lecture Room 3-03 at the Law School, the lecture drew more than 80 students, faculty, and guests. Since 2010, the Clavius Distinguished Lecture Series, has brought scholars, researchers and entrepreneurs to Fordham to share their knowledge with the community and the general public. The series is named after Christopher Clavius, S.J., a 16th-century mathematician and astronomer who helped develop the Gregorian calendar.

Gilmer said that data science in the oil and gas industries is used to help predict what types of rocks are under the surface, locate where oil and gas might be found, prescribe how to frack a well for the best return and lowest environmental impact, track supply and demand, and predict future needs and prices.

“How do you go out there and do it with a minimum number of well bores on the surface because you have a surface impact when you’re doing any of these things, and then also trying to figure out how you’re going to keep your aquifers safe—those are all pieces in the dynamics of this project,” he said.

Utilizing informatics can also help a company operate more efficiently, Gilmer said. His software company does a lot of work in seismics—exploring below the ground to find rocks that produce oil and gas.

“In this case, [our machine]was looking for discontinuity—discontinuity in these waveforms—it was going out there and it was a way of being able to very quickly identify fault patterns [in the Earth],” he said. “The machine went out there to find the faults—this would have taken a geologist a month to figure all this stuff out.”

With that data, they were able to see how production was impacted by faults.

“You can see that the closer you were to a fault, the less production you were making,” he said. 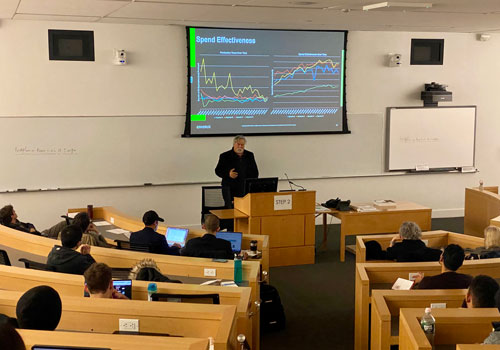 More than 80 guests were in attendance at the 2022 Clavius Lecture.

He also highlighted how informatics can be used to track and improve upon the environmental impact of a project.

Still, Gilmer told the students that while data was essential, they should use it to address bigger problems, not get stuck in the details.

“Whether you’re a physicist, a chemist, a geologist, or what have you—you should not look at your job as being a series of formulas,” he said. “You should be thinking about how to address real problems and how to think about them.” This, he said, is “where greatness comes from.”

In addition to sharing information about data science at lectures like this one, Gilmer—who was named an EY Entrepreneur of the Year in Texas in 2012—is also committed to helping others learn more about it. He established the data analytics program at the University of Texas El Paso, with D. Frank Hsu, Ph.D., the Clavius Distinguished Professor of Science at Fordham, who also attended UTEP.

“If you don’t have the interest in doing it yourself, become good friends with somebody who’s really good at this stuff, because sometime during your lifetime, sometime in the next five or 10 years, you’re going to have a big need or a big use for these skill sets,” he said.

From Fracking to Film

While Gilmer’s background is as a geoscientist who worked in energy, he’s also had a passion for film, calling it “one of the best ways of storytelling.” He’s a managing partner of Redbud Studios and AHuevo Films, which produces and finances feature films and streaming content. Their upcoming film Alina of Cuba, starring James Franco and Ana Villafane, has made headlines as it tells the story of Fidel Castro’s daughter and her defection from Cuba.

“We’ve been producing films for the last few years, and I’ve been trying to figure out how to do it in a smarter way,” he said. “It’s an industry that does not have a lot of good data, it doesn’t have easy access to [the data]—it is a closed-off system. It’s a very difficult business environment in which to go out there and make wise decisions.”

They’ve had to get creative to gather feedback from their audience, such as pushing out requests for Amazon reviews on social media.

“It’s really a business of building up a lot of different proxies with regards to figuring out how any of these things are going to work,” he said.

Hsu said that this was one of the best talks he’s heard, particularly in terms of the variety of topics discussed. He also joked that Gilmer—or one of his students—had their next task laid out for them: “Create a new field of movie informatics.” 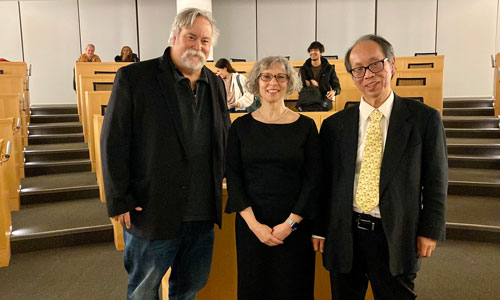 Allen Gilmer with Ann Gaylin, Ph.D., dean of the Graduate School of Arts and Sciences and Frank Hsu, the Clavius Distinguished Professor of Science