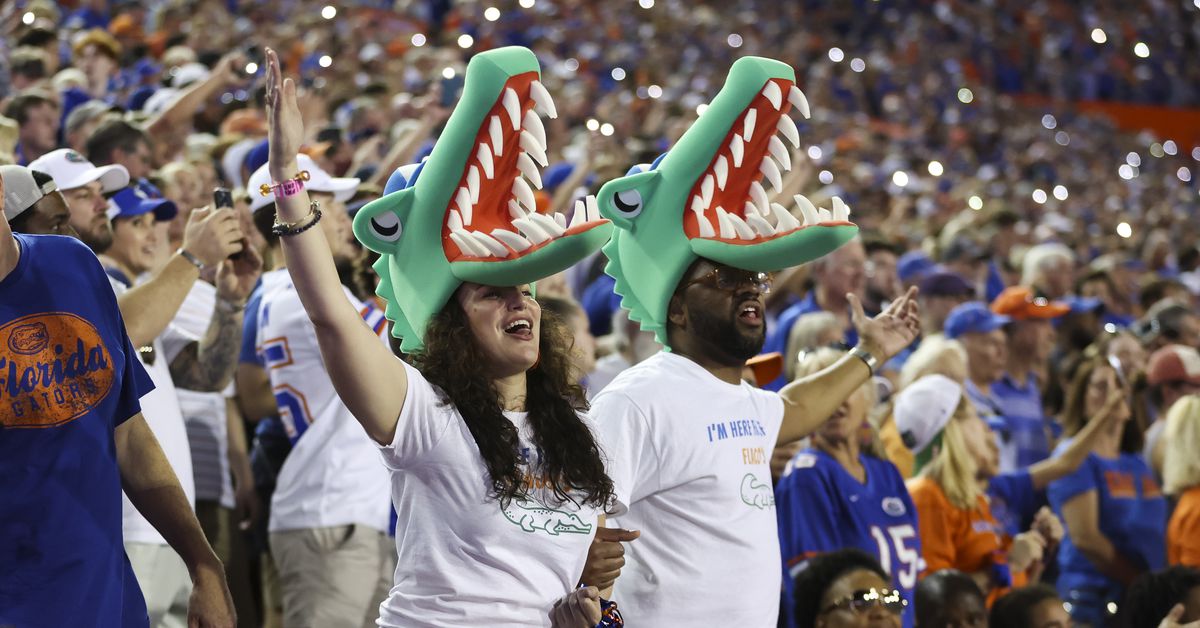 In college football, that is your rival.

The disgusting part of your city, state or region that you have to share a stadium with for 3+ hours to close out the season. It’s likely the team your uncle, in-laws or neighbor root for.

At my house, it’s my sister and her husband who attended Texas A&M.

For you, it’s probably that idiot down the street who drapes his house in that horrendous blue and orange. Gives you dirty looks at the grocery store whenever he sees you in your garnet and gold. Hits you with a Gator chomp anytime those losers trip into something that resembles competent football in the last decade.

It’s well established I’m not a Florida State guy from birth, but when it comes to hating UF, we are kin. Let’s hate, hate, hate and loathe the Gators entirely together as one adopted, online family this year.

I do have to say that this article is one of my favorite parts of the year and I have a real blast putting it together. Thank you to everyone for playing along all year. We’ve got another week to go next week and then I’ll organize something for bowl season that we can all play.

To boost the fun on this final full week, we’re going to pick 15 games. Why? Because we’re starting on Thursday night and I want to give everybody a chance to get as many picks in as possible.

You guys need them to catch me after I finally dominated this thing a week ago and finally got that long awaited win with an 8-2 record. That boosts my yearlong total to a season high 9 games above .500 at 70-61.

Could you be the next Comment Section Champion? Leave your picks below.

If you’re new to the proceedings (which many of you probably are because I’ve only done this for one season), drop your picks in the comments with the spread provided. The following week, I’ll tally up the wins and losses, give a salute to whoever dominates the weekend and add you to our BRAND NEW BULLET LIST OF CHAMPIONS above. Remember, that I’m just a guy with a keyboard, not a gambling pro, so this isn’t advice. Just giving all of us a viewing guide and rooting interest as we watch the football season.

Reminder, I pull all the lines from Tallysight.com because it’s easier to track my picks.

Future Auburn head coach Lane Kiffin? Depending on who you believe, it’s either done or not even a possibility. One of those sources is the man himself who has been using his Twitter account to throw dirt on the fire. Will his potential departure impact his team in what is the most vicious of the rivalries played this weekend. Make no secret about it. These teams absolutely hate each other and these fanbases even more so. It’s a great chance to drop this image and ride with Ole Miss.

Thanks to Navy, our Angry Wave are back in the driver’s seat for the Group of 5 New Year’s Six bid. All they have to do is go on the road and knock off Cincinnati. This is the furthest thing from a blood feud on our slate, but it’s an important game so we pick it anyway.

It’s strength on strength in the battle of North Carolina. Drake Maye and the Heels offense against that NC State defense. Maye has becomes one of the best quarterbacks in the country even as a freshman. He’s leading one of my favorite teams in the country because the offense is awesome and the defense sucks. Conventional wisdom says to take points in rivalry games, but my love for this UNC offense is clouding my better judgment.

For my pick and the rest of our staff predictions, click here.

The game of the weekend will come down to the health of Blake Corum. Michigan’s star running back got banged up pretty good on Saturday against Illinois and missed almost all of the second half. Unsurprisingly, the Wolverines collapsed there after. If he can’t go, this won’t be close. If he is and at full strength, the question becomes if Ohio State can finally play up to their potential. All season long, I’ve waited on the Buckeyes to show off the full potential they have. Somehow they’ve been a disappointing 11-0 as they haven’t played a real complete game yet this year. It feels that the margin of error for Ohio State is much bigger and they’re at home. I’ll bank it being enough to cover this TD spread.

Well that was unexpected. The same week I declared that I was no longer scared of huge spreads against Tennessee, Spencer Rattler made me look like a fool. After getting choked out by that horrible Florida defense I mentioned above, South Carolina found the endzone on damn near every possession of the game. Now, they head to Clemson with a chance to spoil their in-state rivals College Football Playoff hopes. Clemson got the win last week against a terrible Miami team (Never forget how truly terrible this Miami team is). I like South Carolina in this one based on last week alone.

I’m sorry. I committed to 15 games and this is one of the results of that choice.

Earlier this year, I proclaimed Oregon State one of my favorite teams in the country before they were unceremoniously thumped. Since then, they’ve been off the slate without any marquee games. But don’t worry, I haven’t forgotten about you, Beavers.

A year ago, Auburn and head coach Bryan Harsin should’ve beaten Alabama in Jordan-Hare and put an end to what became an SEC championship and national runner-up season. Instead, Bryce Young got his Heisman moment. Auburn is my wife’s alma mater and she’s a passionate Tigers fan. So as we gather around the Thanksgiving table, I’ll allow her to make this pick in favor of Coach Cadillac Williams. Her thoughts:

“I’m ready to have my heartbroken.”

We were so close to some massive shakeups in the College Football Playoff picture last week. The two closest were Michigan and TCU. Michigan’s was, as mentioned above, mostly injury related. TCU on the other hand has seemingly managed to skirt by on countless occasions on the path to their current 11-0 record. We’re due for another massive shakeup from an unexpected source and Iowa State lives to play spoiler. Give me the Cyclones.

Here is a wonderful rivalry in my family. My beloved, truly perfect Louisiana State University and my sister’s cult popularly referred to as Texas A&M. Jimbo and his billion dollar recruiting class have managed a 4-7 record that includes a win over a truly awful Miami team (Again, never forget how terrible this Miami team is) and a loss to Appalachian State. They’re averaging a whopping 21 points per game and have eclipsed 24 points just twice all year. This was the preseason No. 6 team in the nation and Desmond Howard’s national champion pick.

If LSU shows a pulse on offense, they’ll win by two scores.

USC continues to win solely on the arm of Caleb Williams. He is the best quarterback in the country and probably deserves to win the Heisman for how much he is carrying this team. But turnover luck has to turn at some point and Notre Dame is longer stronger each and every week. They’ve found the run game to shorten games that can keep Caleb on the sideline and, like I said, the shakeup is coming.

Alas, we find our most recent victim of a shakeup. The Vols, still licking the wounds of last week’s loss to South Carolina, will face Vandy without their star QB Hendon Hooker after he suffered a torn ACL. Plus, Vandy is coming off a storm rushing victory against Florida. So is it time to back the Dores? Hell no. The Vols backup Joe Milton III has flashed in his other duty this year and was a former starter at Michigan. He can run and has a huge arm. I have no doubts he can keep this offense humming enough to beat Vandy in what will be a UT home game in Nashville.

What a tough return for Kansas QB Jalon Daniels last week against Texas. The Jayhawks got pounded by Bijan Robinson — an insane stat line of 243 yards and 4 TDs. Enter my second favorite running back in college football behind Bijan, Deuce Vaughn. He’s incredibly versatile and can absolutely gash this Kansas rushing attack just like his UT counterpart. I love Jalon Daniels, but he can only do so much.

No better way to end the college football season than with some apple pie and the Apple Cup. Actually, I don’t care for apple pie or pie in general for that matter. But I do love the Apple Cup. I’ve been behind the Huskies so let’s rock with em one more time.