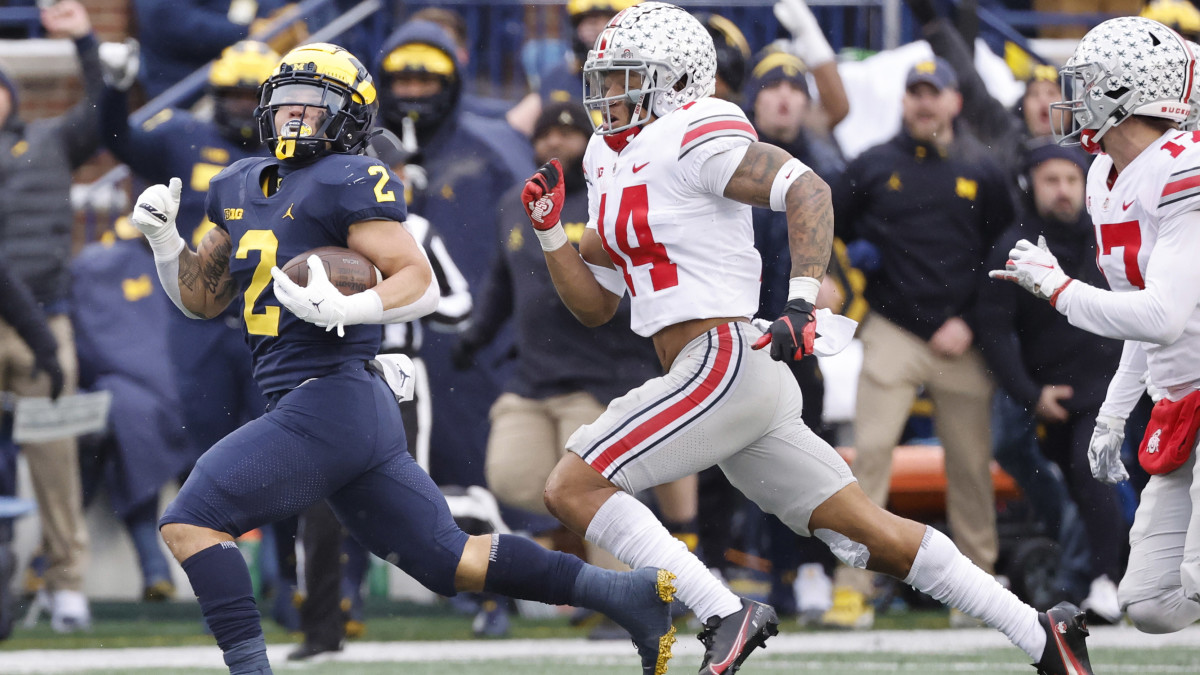 The final week of the college football regular season is here, and that can mean only one thing: Rivalry Week is here. Even for teams not in the College Football Playoff or high-level bowl game discussion, there’s something to play for this week. But while all rivalry games are entertaining to watch, five games, in particular, stand out that should be both heated and critical for postseason implications. Here’s a look at the most in-demand games to attend this Rivalry Week, using insights from SI Tickets.

For the second straight year, the stakes in one of CFB’s most heated rivalries could not be greater. With both teams entering the final week of the regular season undefeated, the winner in this one may decide not just the Big Ten title, but who goes to the College Football Playoff. This weekend’s results also opened the door for the loser to earn a spot in the top four, but the most direct path to the CFP remains winning the next two Saturdays and being a 13–0 conference champion.

Last year, Michigan ended a historic run of dominance by the Buckeyes in this rivalry, beating Ohio State 42–27 behind nearly 300 rush yards as a team and five TDs from Hassan Haskins. Haskins is gone, but last year’s backfield running mate Blake Corum is in the Heisman conversation because of his play this season. But OSU’s defense is much improved, and the Michigan D will have quite the challenge dealing with CJ Stroud and the Buckeyes offense.

Ohio Stadium in Columbus should be rocking for this one as the Buckeyes look for revenge from last year. Tickets are listed on average for over $1,000 on SI Tickets, by far the highest of the week.

South Carolina just ended one team’s College Football Playoff hopes. Can they make it two in two weeks and knock out their bitter rival in the process?

Spencer Rattler’s breakout game Saturday shook up the CFP rank, as the once-touted QB helped the Gamecocks put up 63 points in Tennessee in a shocking blowout victory. Can he outduel a Clemson defense that is among the top 25 nationally in scoring defense? Doing so would be quite the achievement against a Clemson team that hasn’t lost at home since November 2016, meaning that the Tigers don’t have a single player on their roster who has ever lost a game at Memorial Stadium. Tickets to watch the Tigers attempt to extend their home winning streak to 41 are listed on SI Tickets for an average of $464.

Any hope Clemson has of going to the College Football Playoff relies upon winning out and likely getting help from other contenders losing. But while that path may be narrow, it’s hard to rule anything out in this chaotic season.

This heated in-state rivalry has one of its highest-stakes meetings in a long time looming. Oregon’s path to the Pac-12 Championship Game and potentially the Rose Bowl is clear: Beat the Beavers, and the Ducks are off to Las Vegas to take on USC. But Oregon State would like nothing more than to play the spoiler, and Jonathan Smith’s team could win nine games for the first time in a decade with a win in this one. You can check this matchup out for an average of $421, per SI Tickets.

A Pac-12 title game appearance would be quite the win in Dan Lanning’s first season in Eugene, especially considering how it started against Georgia. But Bo Nix’s emergence into a star has made this Ducks team a contender for a spot in the New Year’s Six, and while the CFP is off the table, the Rose Bowl is still up for grabs. We’ll see if Lanning’s team can find a way to win in a hostile road atmosphere.

The Trojans are suddenly a major factor again in the College Football Playoff race, winning a shootout against rival UCLA last weekend to lock up a spot in the Pac-12 title game next weekend. And with two more opportunities to move the needle to the selection committee, USC has a real chance to sneak into the top four in Lincoln Riley’s first season. And to add to the stakes, a strong finish could also earn Caleb Williams the Heisman, particularly after Hendon Hooker’s season-ending injury.

They’ll face off against a resurgent Notre Dame team playing its best football at the right time for first-year coach Marcus Freeman. The Irish have won five straight since starting 3–3, including a huge win earlier this month against Clemson that may have knocked the Tigers out of the College Football Playoff. Can ND play spoiler yet again? These tickets are a hot commodity, with prices on average listed at $395 on SI Tickets.

This year’s Iron Bowl doesn’t have the significance we’re used to. Alabama isn’t a factor in the College Football Playoff or SEC title race, and Auburn is mired in one of the worst seasons in the program’s recent history (though could clinch bowl eligibility with a win). But there’s a reason this game still is among the five hottest tickets of the week, with an average price of nearly $400 on SI Tickets: The Iron Bowl is CFB at its best.

A rivalry that has produced so many incredible moments, from the Kick Six to last year’s Crimson Tide comeback to stay in the CFP conversation, the Iron Bowl is never not special. This year, an Auburn legend in Carnell “Cadillac” Williams gets a chance to etch his name into Tigers lore by beating Nick Saban and the Tide, an upset that could flip Auburn’s coaching search upside down. Meanwhile, Alabama fans want to send Bryce Young off to the NFL with one more win at Bryant-Denny Stadium and likely lock up a New Year’s Six bowl appearance in the process.