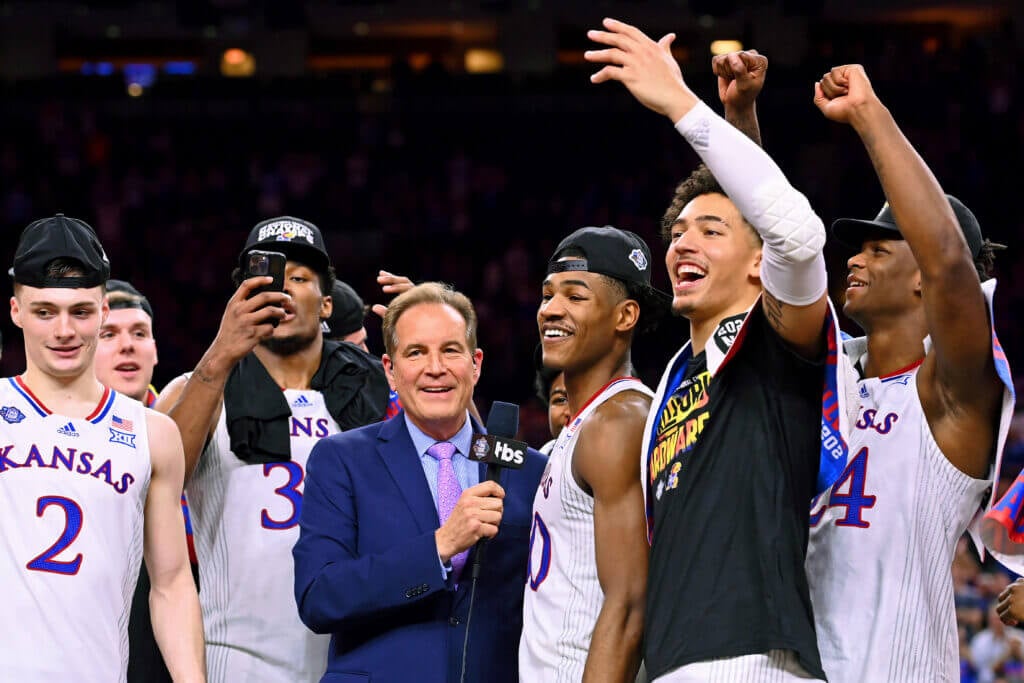 Here is the most delicious irony of all: One of the things keeping the final thread stitched to the fabric of college athletics is men’s college basketball. Which is absurd considering college hoops wields all the influence of college water polo when it comes to conference realignment.

Except it’s kinda true. For now.

The news that USC and UCLA are in “conversations” with the Big Ten (which is akin to saying you’re going to “look” at a puppy; you always come home with a puppy) pushes us one step closer to the brink of the absolute collapse and reconfiguration of college sports, where college football operates like Major League Baseball, the NBA, the NFL and every other professional sports enterprise. Namely, it consolidates into one giant beast, divides into sensible geographic regions, negotiates a television deal that has more zeroes than I can count and kicks off into the brand new world, the rest of the NCAA be damned. In some ways, it would be better if they just did this. Rip off the Band-Aid and get it over with already.

Because we will get there eventually. Right now, in offices in Clemson, S.C., Tallahassee, Fla,, and Eugene, Ore., folks are frantically trying to figure out if Greg Sankey and Kevin Warren prefer red wine or white, while new Big 12 commissioner Brett Yormark is wondering why he didn’t just go back to being in charge of the Nets. Conference realignment, after all, is a lot like chiropractic realignment; it never quite ends. Remember when Maryland and Rutgers jumped to the Big Ten? That move swallowed a conference (the Big East) whole.

But along with greed, the thirst for power, a need for global domination and general flexing, one of the hard stops for Touchdown Tyranny is the big 68-team elephant in the room. What to do with the NCAA Tournament? No one cares about basketball, in and of itself, in any of this. It’s not alone. No one cares about fencing or field hockey, soccer or squash (happy commuting Penn State Olympic sports, by the way) or academics or student-athlete welfare or even fans, to some degree.

But the NCAA Tournament, as an entity, is a different story. It holds a lot of sway sentimentally, practically and financially (listed in order of importance), which makes it a very messy thing to contend with going forward. From the nostalgic point of view, no one wants to be the ogre who kills the NCAA Tournament. People in and around my neck of the woods have still not forgiven Rollie Massimino for “killing the Big Five,” and this would be slightly worse. Slightly. If the so-called power conferences were to go full NCAA secession, they would leave Cinderella barefoot on the staircase, creating in her place a world where we are left with just sucky teams in lieu of plucky ones.

Of course, conference commissioners and university presidents already have proven to be relatively soulless when it comes to sentiment. Remember when Kansas used to play Missouri regularly? And Duke versus Maryland? Odds are these folks have coffee table books filled with contracts, not scrapbooks. Hard to see them sniveling for Saint Peter’s.

So let’s consider practicality. The NCAA Tournament is nearly the only thing holding the NCAA together. The national body already is undergoing a transformation, admitting and recognizing that much of its operation isn’t relevant anymore. Yet even with its guts flayed, it’s still somehow alive. It’s like a great big cockroach. No one can kill it because, while a conglomerate football enterprise could govern itself, most everyone agrees that anarchy wouldn’t fly well in college sports. People in charge, believe it or not, are a little bit too self interested. Someone needs to set boundaries, not to mention host championships for all of the other sports. And the NCAA is in charge of the men’s tournament. Which leads us to the final point.

We are finally speaking everyone’s language. In 2016, the NCAA and CBS negotiated an eight-year extension to its already $10.8 billion deal. The contract now runs through 2032 and is worth, beginning in 2025, more than $1 billion annually. That’s billion with a B, and it means more money for everybody in college sports. The math is a little convoluted but each win, or unit in NCAA parlance is worth about $337,000 (the title game doesn’t count, so the max number of units each year is five). They are paid out over a six-year rolling period, and are further compounded by a conference’s continued success. The Los Angeles Times boiled it down into a handy chart about the Pac-12, after the league’s unexpected 2021 tourney success, showing how the conference made about $17.9 million off of hoops last year alone. Per Sportico, the ACC and Big Ten were set to clear $36.4 million over the next six years over this year’s tourney alone. That’s real cash — the kind that keeps some Division I departments afloat and the sort that further lines the pockets of others.

Except it’s real cash predicated on the NCAA Tournament as we know and love it — a three-week odyssey, open and available to everyone who plays D1 hoops, not just the schools who joined the football clubhouse. And it’s a deal that is in place for another 10 years, which, in college sports feels is a lifetime.

Admittedly, if college football’s power sources could ever agree to work together instead of stab one another in the back they could earn a deal worth more than GNP and none of this would matter. But since agreement, cordiality and greater good seems a long way off, college basketball can, for the short time, enjoy its small little island of power. Madness — March Madness — indeed.