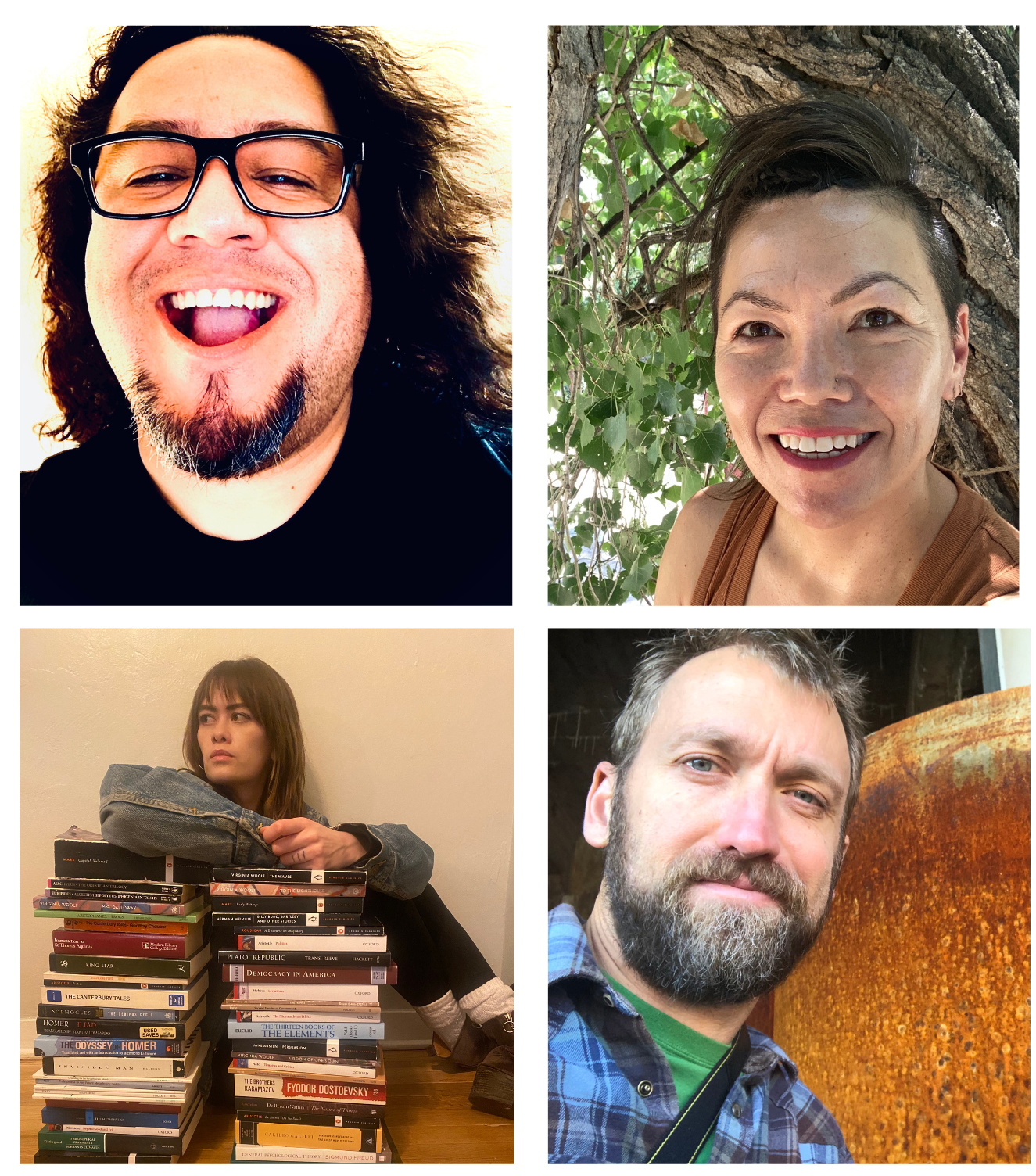 October 3, 2022 – The City of Albuquerque’s Department of Arts & Culture (DAC) was invited to serve as a Culture Hub for the Artists At Work (AAW) initiative in partnership with THE OFFICE performing arts + film. DAC has selected four local artists to collaborate on social impact initiatives during a year-long, paid artist residency.

AAW is a workforce resilience program designed to support healthy communities through artistic civic engagement. AAW is an idea inspired by the WPA and founded by THE OFFICE performing arts + film with an initial pilot in Western Massachusetts in 2020. Following that success, AAW was awarded $3M by the Mellon Foundation to expand its program in other parts of the country, including the Borderlands Region in fall 2022.

Seventy four applications were received by the City and an ad-hoc committee of local artists, City staff, and local organizational partners scored applicants based on a unique rubric then met to discuss top candidates.

Each artist selected will receive a living wage salary of $32,500 (using the MIT Living Wage Calculator for their respective region as a guide), plus healthcare benefits.

The four artists selected are:

Dale Ray Deforest has been a resident of Albuquerque since 2011 after moving from Santa Fe where he lived for more than 15 years. He grew up in Farmington just off the cusp of the Navajo Nation. Growing up, Dale and his younger brother were enrolled in a boarding school located near Dzilth-Na-O-Dith-Hle. He graduated from the Navajo Preparatory School in 1995 and attended the Institute of American Indian Arts in 1997. Dale then spent 13 years at the Santa Fe New Mexican before leaving for the Albuquerque Journal and then Route 66 Casino. Dale said the casino was a better fit for him at the time because he was able to do more creative and interactive projects. It was after Indigenous Comic Con that he discovered his talent as an illustrator could be the career meant for him.

J P 제피* (formerly Jen Pack / 백희숙) is a bicultural and bigender artist from the West Coast who is now growing roots in Albuquerque. JP’s desire is for (he)r work to effect change, particularly in the Albuquerque. S(he) loves Albuquerque and wants to contribute to its well-being in a meaningful social practice that directly supports the culturally diverse communities that live here. JP describes (he)rself as a polytonal being and the nature (he)r work is one of integrating tensions by collapsing genres, spaces, identities, and norms. S(he) works with abstraction and symbol as a gateway into indistinct territories where stories dance.JP explains that (he)r practice in ritual border breaking is one of truth seeking and informed by (he)r role as a wounded healer who reaches beyond enclosed boundaries. This is the space of an inceptive center – one that relies on tradition while it simultaneously seeks to create new inheritances and pathways for healing.

Amanda Dannáe Romero, born and raised in Santa Fe, is a queer Latina experimental artist and musician currently based in Albuquerque. Her work incorporates sound, coding, colcha embroidery, tinsmithing, video, photography, and performance. Amanda’s work focuses on the interconnectivity of humans and environments, and she weaves technology and traditional art practices together in large-scale sound and video pieces and performances. Amanda received a Master of Arts in Liberal Arts from St. John’s College. She is also an educator and curator and a founding member of fourteenfifteen gallery and the L.o.A. Collective. She is currently working on an immersive sound art exhibition and a collaborative project with artist Paula Castillo for SITE Santa Fe debuting in spring 2023.

Billy Joe Miller is a queer, self-taught interdisciplinary artist who creates sculptures, installations, and public art in response to the natural world. The themes of belonging, shelter, and sanctuary are integral to his work. As a hospice nursing assistant for many years, Billy Joe accompanied people through the process of dying. His experiences in healthcare-related sites, as well as his diagnosis of multiple sclerosis in 2010, have inspired his desire to create accessible public art for parks, community centers, civic space and healthcare related sites. Originally from San Diego, Billy now lives in the East Mountains. In addition to his studio practice, he creates collaborative community-based projects and produces public art.

More information about Artists at Work can be found at https://www.artists-at-work.org/.