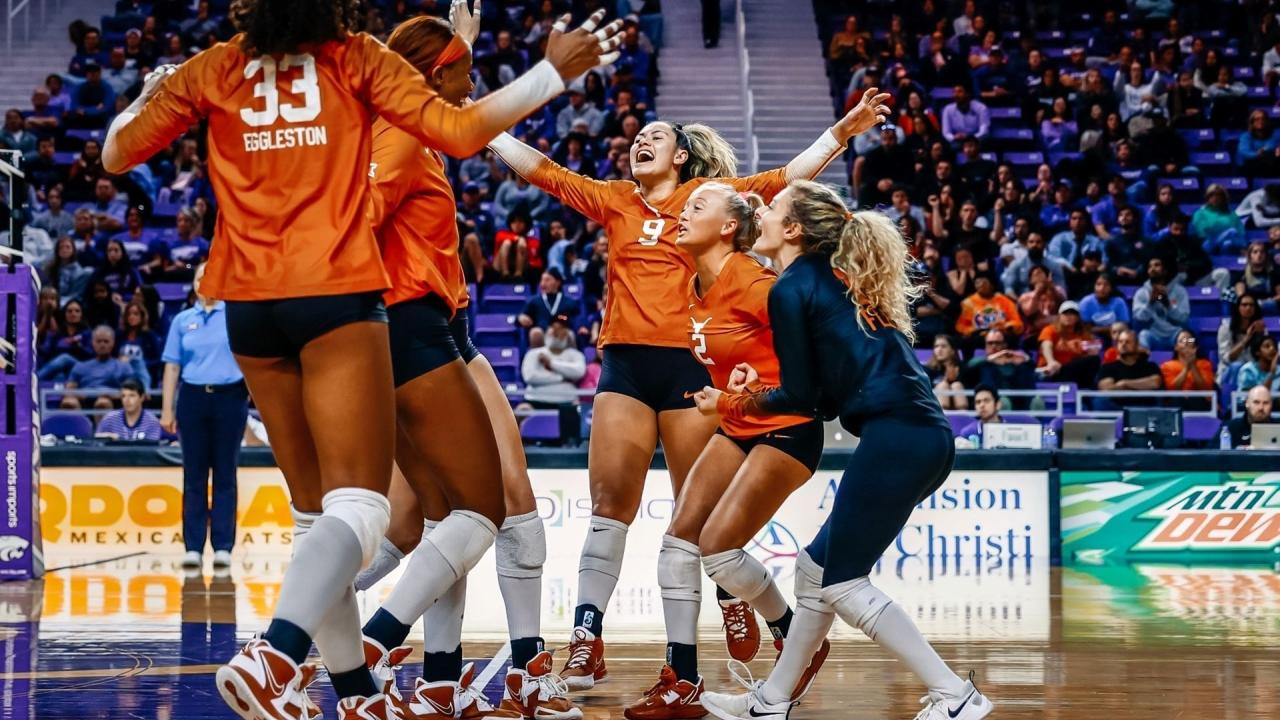 The DI women’s volleyball selection committee released its second top-10 of the 2022 season. Texas remains on top of the second committee top-10 reveal following Nebraska’s second loss on the season to Wisconsin this past week. The Longhorns registered their first loss of the season to Iowa State.

The committee has Texas on top of the most recent top 10 as the Longhorns have just one loss on the season and multiple wins over top 10 teams. The Cardinals are at No. 2 — they dropped a spot in the AVCA poll after its loss to Pittsburgh, but move up to No. 2 here following Nebraska’s second loss. The Huskers were swept by Wisconsin this past weekend for their second loss on the season. Both Louisville and Nebraska have two losses, but to top 10 teams.

Pittsburgh is up at No. 4 in the top 10 reveal, likely because of its big win over Louisville in five sets since the last top 10. San Diego dropped two spots from the last top-10 reveal despite maintaining just one loss on the season. The committee likely takes the last 10 games into consideration, and San Diego has not played a top-10 team since September. The ordering of Louisville, Pittsburgh, San Diego and Ohio State was interesting. OSU beat Louisville, Louisville beat San Diego, San Diego beat Pitt and OSU, and Pitt beat Louisville. So it is hard to stick to head-to-head logic, here. The committee likely weighed their top-10 and 15 wins as well as the quality of losses.

Ohio State comes in at No. 5 with its 15-5 record on the season. The Buckeyes have five losses on the season, but only to teams ranked in the committee’s top 10. This is likely why they got the edge over both Wisconsin and Stanford. Wisconsin did not even appear in the first edition of the committee’s top 10, but made an appearance in this second reveal at No. 7, above Stanford. The Badgers have a big sweep over Nebraska and retaliated its loss to Minnesota earlier in the season with a win this past weekend. That is two wins over other top-10 teams that they didn’t have last time around.

They got the edge over Stanford, who ALSO has a win over both Minnesota and Nebraska, but one extra loss. The committee likely took that extra loss into account as well as the fact that Wisconsin beat those two teams more recently.

Minnesota came in at No. 9 with two wins over fellow top-10 teams in Oregon and Wisconsin. Plus, seven losses on the season. The last spot might come as a surprise to many, though. Oregon takes the No. 10 spot in the poll, which is much higher than the Ducks are in the AVCA poll. The committee gave the Ducks a favorable ranking in the first top-10 reveal — with the No. 7 ranking. The Ducks did notch three losses in a row to Washington State, Washington and USC. But, the committee must be REALLY valuing their sweep over Stanford. Oregon is ALL the way down at No. 18 in last week’s AVCA poll. Georgia Tech, Penn State, Purdue, Florida, Baylor, Marquette, Creighton and BYU ALL stand above the Ducks.

Georgia Tech may have been in consideration, but the Jackets only have one big win over BYU. The committee likely decided the Ducks’ win over Stanford was more valuable. Penn State has wins over Stanford AND Oregon … but six losses. Some might argue that the Nittany Lions’ schedule would supersede Oregon’s. Florida has a win over Wisconsin, similar to Oregon’s one win over Stanford. So to me, putting Oregon in at No. 10 shows the committee is really valuing the strength of the Pac-12.

The NCAA DI Volleyball Committee announces its Top 10 teams for results through October 29, 2022.