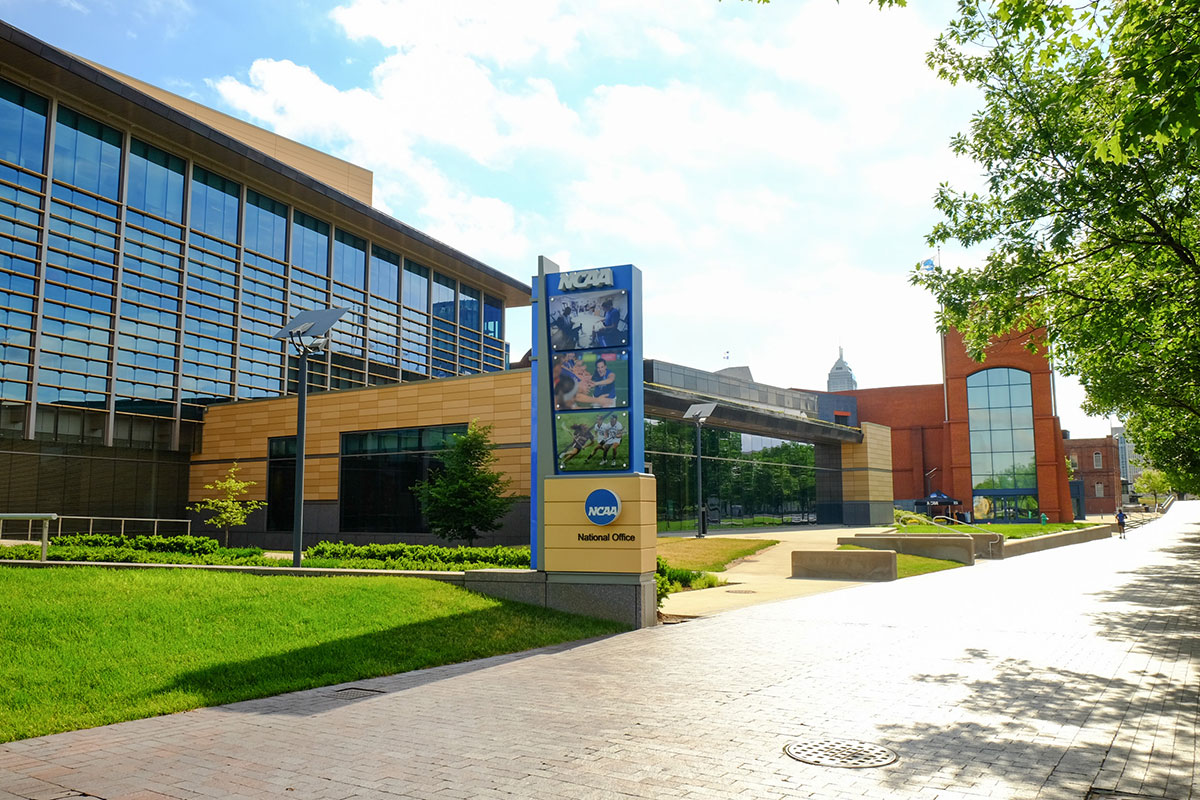 The Indianapolis-based NCAA has been accused of evidence spoliation after a series of “Sports Injuries Handbooks” allegedly went missing from its library, but a judge has ruled in its favor. (IBJ file photo)

A concussion lawsuit against the National Collegiate Athletic Association, which has included tangles over deposing high-ranking officials and allegations surrounding missing library materials, has been scheduled for a January trial in Marion Superior Court.

In the wrongful death complaint filed in August 2018, Jennifer Finnerty, widow of Cullen Finnerty, asserts the NCAA should have protected her husband but ignored the dangers of concussions.

Cullen Finnerty allegedly sustained multiple concussions during games and in practices, including while he was the starting quarterback at Grand Valley State University from 2002 to 2006. After graduation, he suffered a mental health decline and eventually died when he was 30. Jennifer Finnerty linked the death to chronic traumatic encephalopathy, CTE.

The case — Jennifer Finnerty, Individually, and as Personal Representative of the Estate of Cullen Finnerty v. National Collegiate Athletic Association, 49D01-1808-CT-033896 — has been consolidated with multiple others also filed by families of former college athletes who suffered brain injuries from playing football.

Already the lawsuit has made an impact. The dispute between the parties over deposing NCAA officials invited the Indiana Supreme Court in July to issue an opinion that established the state’s own “apex” framework.

The lawsuit took a twist this year when the plaintiffs alleged the NCAA had destroyed evidence showing the organization has long been aware of the dangers of concussions. The plaintiffs asserted a series of “Sports Injuries Handbooks” published from 1934 to 1961 were destroyed because the materials, allegedly, showed the association has known for decades about the relationship between head trauma in college football and long-term brain damage.

Fueling the allegations were a shelflist prepared by one of the librarians at the NCAA headquarters, the handbooks not being included in a metal cabinet where other publications and studies of sports injuries were kept, and an empty shelf next to the NCAA’s “Sports Medicine Handbooks” from 1981 to 2011.

The NCAA called the plaintiffs’ allegation “invented speculation.” No evidence exists, the defendant told the court, that a lone “Sports Injuries Handbook” published in 1933 is the first in a long series of handbooks published annually related to the injuries suffered by student athletes.

According to court documents, the NCAA has an extensive library at its headquarters in Indianapolis that is a “major resource depository.” In 1972, the association recommended the library retain “all items of more than transitory value.”

Since about 1988, the NCAA has employed librarians, and in 2003, some of the material from the library was moved into a warehouse to make room for the research staff.

The library staff inventoried the materials in advance of the move to what is called the NCAA distribution center. An inventory list entitled “Sports Science Collection” includes an entry for “Sports Injuries Handbooks, 1933-1961.”

However, when the plaintiffs requested the handbooks, the NCAA attorneys admitted the publications could not be found.

In a footnote to their Motion for Relief from Defendant’s Spoliation of Evidence, the plaintiffs contend the 1933 handbook came to light only because researchers discovered it in the library at Michigan State University.

The single handbook has led the plaintiffs to believe the potential series of other handbooks indicate the association has been documenting brain trauma for decades.

According to the plaintiffs, the 1933 publication describes the serious nature of head injuries and nods to brain trauma by observing players can become “punch drunk” from recurrent concussions. Moreover, then-NCAA President Major John Griffith described the 1933 handbooks as one of the association’s “most important contributions” because of the “scientific treatment” it encompasses.

The NCAA argued in its response to the spoliation motion that the plaintiffs had not shown the 1933 handbook is related to the “Sports Injuries Handbooks” referenced in the 2003 library inventory.

Also, the association hit back on the plaintiffs’ allegation that the 1933 booklet “suspiciously” appeared at the NCAA only after it was found at Michigan State. The defendant called the assertion “spurious and misleading.”

Moreover, the NCAA characterized the plaintiffs’ contention that the handbooks were negligently or intentionally lost or destroyed as “more fabrication and … speculative.” The defendants said even if the handbooks did exist, they could have been donated to another library, given away for former employees and other organizations, or sent back to the publisher.

The Marion Superior Court denied the spoliation motion, finding the plaintiffs failed to demonstrate the NCAA had a duty to preserve the “Sport Injuries Handbooks.”

Even though the first concussion lawsuit was not filed until 2011, the plaintiffs argued the association had a duty to preserve evidence in 2003. They assert the NCAA was put on notice that lawsuits were imminent by a series of events that included the association developing a catastrophic injury fund, drafting liability waivers for NCAA athletes to sign and asking for “legislative immunity from health and safety lawsuits.”

The defendant pushed back, asserting that under Indiana law, it did not incur a duty to preserve evidence until the first concussion lawsuit was “imminent.”

In its 14-page ruling on the spoliation motion, the trial court agreed with the NCAA.

“At most, the examples cited by Plaintiffs establish that the NCAA has been generally aware of the threat of health and safety litigation throughout its existence, just as any other organization is generally aware of the ever-present threat of litigation,” Marion Superior Judge Heather Welch wrote. “But if general awareness of the threat of future litigation was sufficient to trigger a duty to preserve evidence, large organizations like the NCAA would be under a never-ending duty to preserve any and all documents that they ever created, received, or possessed.”•