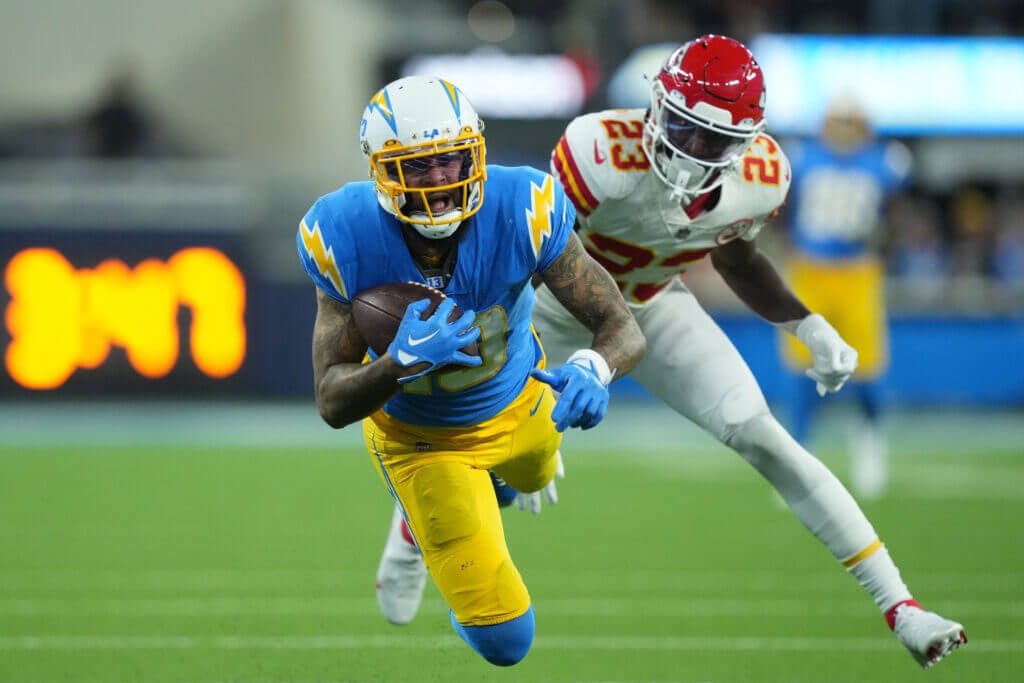 The Chargers lost to the Chiefs, 30-27, on Sunday night to fall to 5-5 on the season. They have lost two straight games and three of their last four. They are now in ninth place in the AFC playoff race — on the outside looking in.

Here are some final notes, thoughts, stats and quotes from another tight loss.

1. Through 11 weeks and 10 games, the Chargers rank 24th in Football Outsiders’ DVOA efficiency metric. The eight teams below them in those rankings, in order: The Raiders (3-7), Broncos (3-7), Rams (3-7), Bears (3-8), Cardinals (4-6), Colts (4-6-1), Panthers (3-8) and Texans (1-8-1). The negative: The Chargers are just outside the bottom third of the league. The positive: They play five of the eight teams mentioned over their final seven games of this season: Las Vegas, Denver, Los Angeles, Arizona, Indianapolis.

2. Receivers Mike Williams (ankle) and Keenan Allen (hamstring) both started Sunday night’s game. Williams made it through just six offensive snaps before suffering what coach Brandon Staley called Monday an aggravation of his high ankle sprain. Williams made a sensational toe-tap catch along the sideline on a third-and-2 on the Chargers’ second drive of the game. He tweaked his ankle while coming down in bounds and did not return. Staley said the tweak is “not a significant re-injury.” But considering how this season has gone for the Chargers, we will see. Staley said the Chargers would find out more over the next two days and have an update Wednesday when the team returns to practice.

‘Close is not good enough’: Chiefs continue dominance over Chargers

3. Allen’s return was far more successful and impactful. Allen played 44 offensive snaps and caught five passes for 96 yards, including a 46-yard deep shot on a third-and-18 in the fourth quarter that set up what was then a Chargers go-ahead touchdown. Most importantly, Allen said after the game that his hamstring held up well and he did not deal with any issues during the loss. Allen had played just 45 snaps in the Chargers’ first nine games of the season. And his return really opened things up for the offense. He caught an out route off play action for a 17-yard gain on the Chargers’ first offensive play. Allen did fumble after a catch and run on a screen pass early in the fourth quarter, but he made up for it with that 46-yarder on the ensuing drive. Allen made an incredible adjustment to create separation and get on the end of Justin Herbert’s throw.

Herbert is averaging 0.25 expected points added per dropback with Allen on the field this season, according to TruMedia. That plummets to 0.03 EPA/dropback when Allen is off the field. Allen is a difference-maker, and that was clear Sunday night.

4. Overall, the offense had one of its better games of the season. Herbert threw the ball extremely well. It was his best EPA/dropback game since a Week 4 win over the Texans, according to TruMedia. He was able to push the ball downfield, especially in the first half, and topped 8.0 air yards per attempt for the first time this season. Herbert completed six explosive passes — defined by TruMedia as any reception over 15 yards — and the Chargers finished with a 20 percent explosive pass rate. That rate was at just 11.9 percent entering the game, and they had not finished a game with an explosive pass rate over 15 percent since Week 4. The Chargers offense averaged 0.16 EPA/play in the game — the third-best offensive performance in the league in Week 11 entering Monday behind the Chiefs and Cowboys. They converted 57.1 percent of their third downs, and they posted a season-low in three-and-out rate at 20 percent.

The Chargers ran the ball effectively enough. It was not pretty, and with the run blocking inconsistencies, I do not think it is going to be pretty at any point this season. The Browns game was obviously an aberration. But they were opportunistic. A season-high 30 percent of their rush attempts went for first downs. The one missing piece, which has become a trend this season, was the explosive rushes, which TruMedia defines as any rush of 12 yards or more. The Chargers finished without an explosive rush for the fourth time this season.

5. This all comes with one caveat: The Chargers offense is a completely different unit in the second half of games. The Chargers are third in the league in offensive points scored in first halves this season. They are 28th in points scored in second halves. They are fifth in EPA/drive in first halves this season, and they are 27th in second halves. This issue popped up again Sunday night. The Chargers scored 20 points in the first half and went scoreless in the second half until Herbert led that go-ahead touchdown drive late in the fourth quarter.

Joe Lombardi’s offense is going through too many droughts in the second half of games. And it happened again Sunday night.

Their opening drive of the second half was derailed by a negative run and then a penalty. Rookie running back Isaiah Spiller got a handoff on a second-and-6, and tight end Richard Rodgers missed a block on the right edge. Spiller was dropped for a loss. On the ensuing third-and-7, right tackle Trey Pipkins III was called for a false start, setting up a third-and-12. The left side of the Chargers’ line — left tackle Jamaree Salyer and left guard Matt Feiler — then failed to pick up a stunt on the next snap, and Herbert was sacked.

The Chargers then went three-and-out on their next series. Herbert hit Allen for a 9-yard gain on second down. Facing a third-and-1 from their own 34, Herbert handed off to Austin Ekeler on a shotgun run to the right. Feiler was supposed to pull from left to right on the play, but Chiefs defensive tackle Chris Jones — who was dominant in the second half — penetrated through the Chargers’ initial push and cut off Feiler, blowing up the play. Staley then punted on fourth-and-1.

Those two failed drives gave the Chiefs offense the opportunity to take the lead. 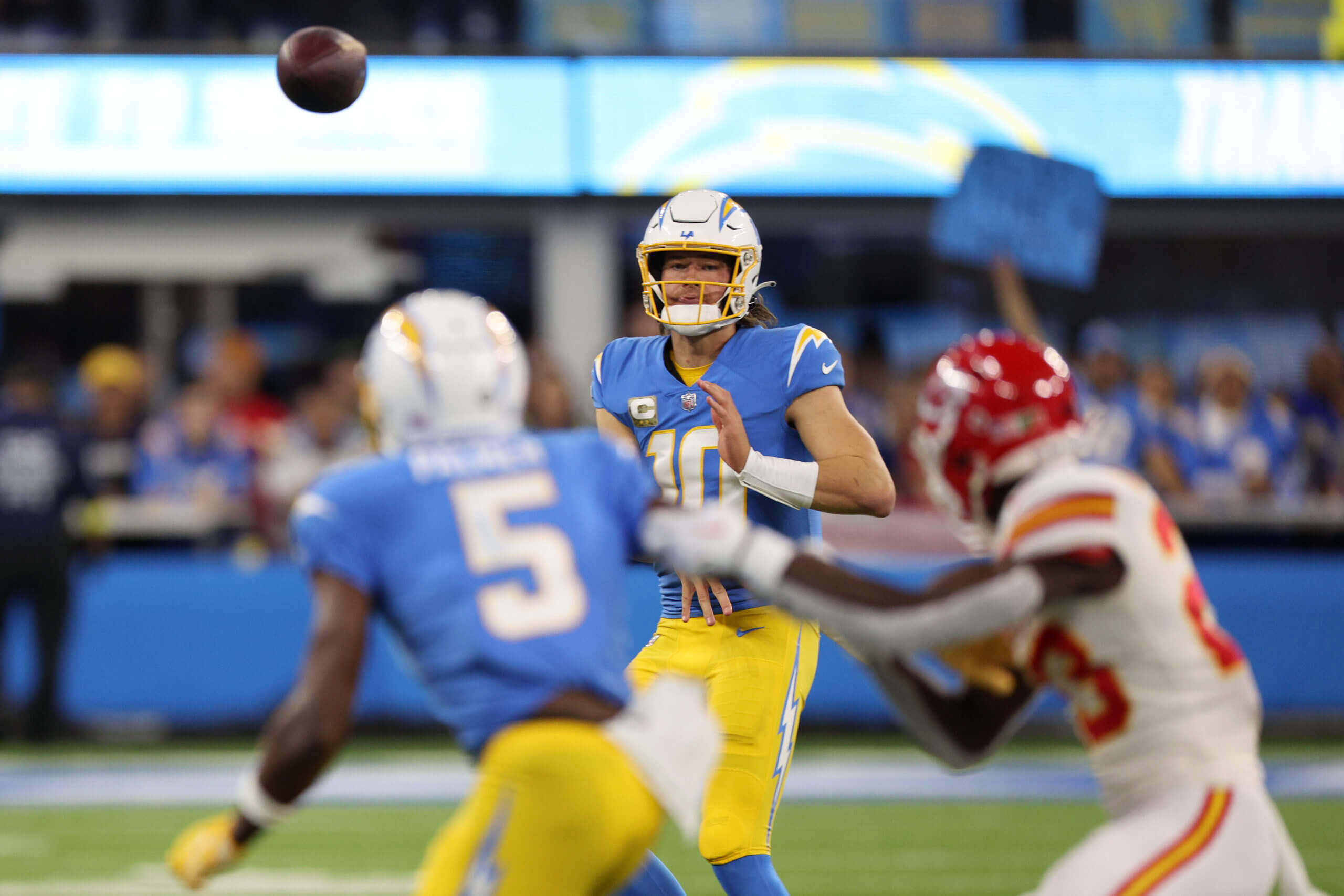 Justin Herbert was dynamite out of play action in the first half but the Chargers largely abandoned it in the second half. (Harry How / Getty Images)

8. The Chargers’ issues defensively stemmed largely from containing tight end Travis Kelce, who finished with six catches for 115 yards and three touchdowns, including the game-winner with 31 seconds remaining. Safety Derwin James Jr. was in man coverage on Kelce on that final touchdown, but that was the only reception James allowed to Kelce in the game, according to Pro Football Focus. He was matched up with him three other times, all on third down. Those plays resulted in three incompletions.

Staley was attempting to mix his coverages, but I think we should have seen more of James on Kelce, who was by far the Chiefs’ most viable receiving threat in the game.

“Things were contested last night,” Staley said of defending Kelce. “You didn’t see him catch anything wide open. We were on him. There was a good mixture of coverage. Lots of different types of rotation, man-to-man, zone. He was able to make a couple of big catches on third down. … He had a couple of run-after-catch plays, which were big contributions to those three big catches. The two touchdowns, and then the breakout on third down. Outside of those three, everything was tight. We were on him, and we were forcing him to work, and that was the plan. We did a good job of that. Where he really hurts you is manipulating zones where there is no one there and he’s able to kind of sit down, break out. (Patrick Mahomes) eludes you, creates more time and space, and it’s not contested. I felt like we contested passes last night. I’m willing to live with that.”

9. The Chargers defense had a chance to win the game in the final two minutes. Mahomes drove the Chiefs 75 yards on six plays to take the lead. Staley said he thought the completion from Mahomes to Marquez Valdes-Scantling on the first play of the drive should have been offensive pass interference. He felt like Valdes-Scantling pushed off on Bryce Callahan. There was no replay on the TV broadcast, so I will have to check that out on film once the all-22 is released. The holding penalty on James on third-and-4 was a correct call by the book, but I do not think the officials had been calling the game that way all night.

The real killer play was Mahomes’ 16-yard scramble on first-and-10 from the Chargers’ 33. Interior defensive linemen Morgan Fox and Sebastian Joseph-Day collided when they tried to twist on the inside. They were both discombobulated after the collision and never got their bearings. That opened up a massive hole in the middle of the field, and Mahomes took it.

Joseph-Day called it a “miscommunication” in the locker room after the game. “Just a four-man rush,” Staley said Monday.

11. Staley’s decision to punt on fourth-and-inches from his own 34 in the third quarter was a head-scratcher.

I asked Staley about the thought process after the game, and this is what he said: “Really felt like flipping the field position there was the right thing to do. It was even. The game was even, and I didn’t want to swing the momentum their way. And we had been stopped on a couple short-yardage plays, and I just felt like our defense was playing at a high enough level and wanted to give our defense a chance to compete.”

It is pretty clear to me that Staley just did not trust his offense to get a yard in this situation. Ekeler had been stuffed on a second-and-1 pitch play to the right from the Chiefs’ 2-yard line late in the first half. And Jones had blown up the third-and-1 Ekeler rush on the play before he punted. Jones was a one-man wracking crew in the second half, and I cannot help but think his play and presence affected this decision.

Staley is not the same decision-maker he was last season. I thought this was a bad decision. The Chiefs scored on their next possession to take a 23-20 lead.

12. A few injury updates to round us out. Murray suffered a stinger in his neck the second half Sunday night that did not “resolve” during the game, according to Staley. But Staley said Murray was feeling “better” Monday. And running back Joshua Kelley (knee) is expected to return to practice this week, Staley said. Kelley has now sat out the requisite four games and is eligible to be activated off injured reserve.