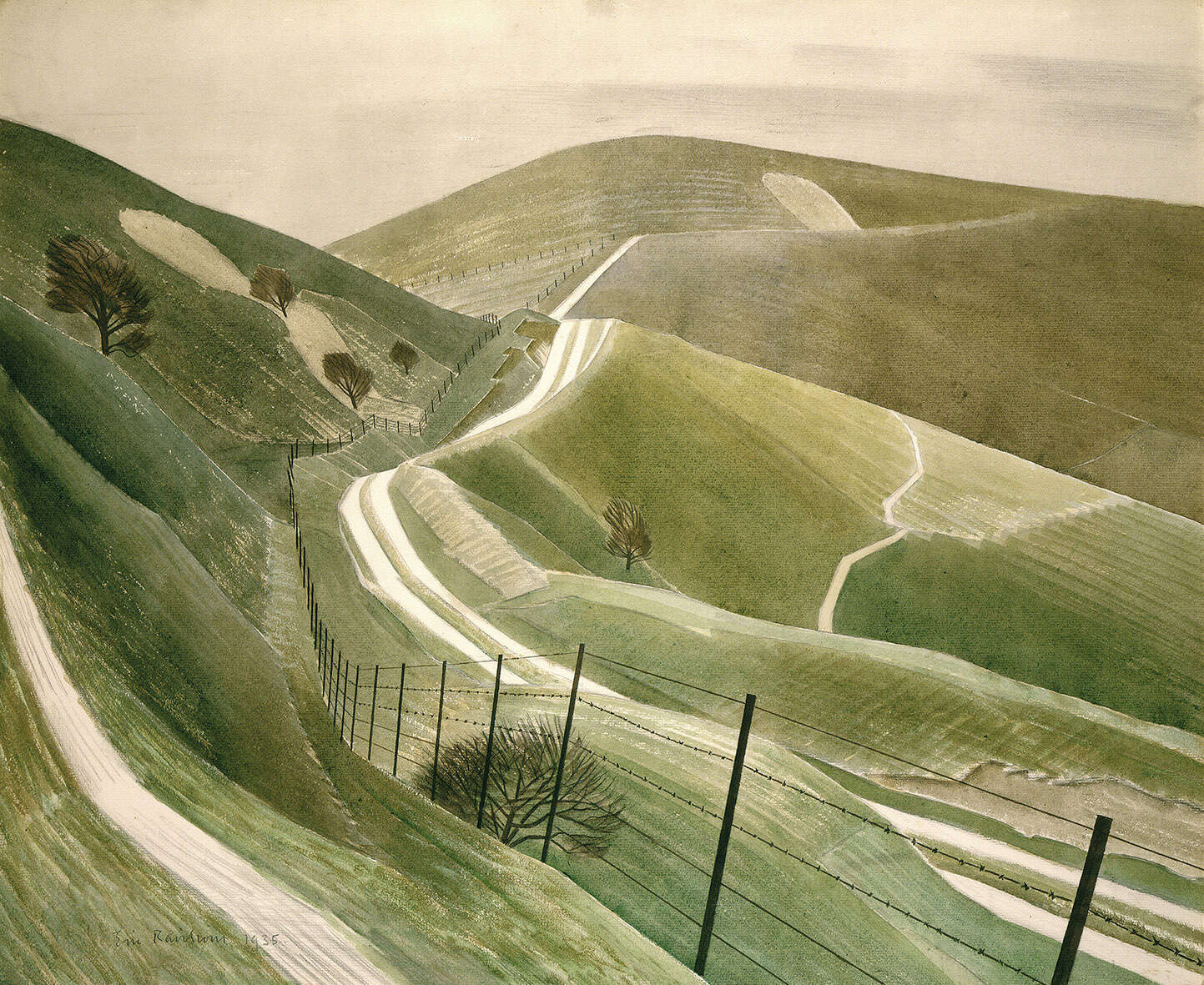 In 1935, Eric Ravilious painted one of his most celebrated watercolours. Chalk Paths shows a series of tracks snaking their way up and across the flanks of the Sussex Downs. A barbed wire fence leads the eye over the hillsides while a smattering of trees, windblown and leaning, dots the grassy slopes. There is no Long Man of Wilmington or other ancient chalk figure visible but the whiteness of the paths evoke their outlines and endows the scene with a sense of deep history.

There are many Downland views that resemble this but no exact likeness; Ravilious did not paint a real place but conjured up, from his love of his local landscape, a composite scene. Nevertheless, the picture has become a defining image of the Downs and of quintessential England – rural, rooted and very old.

Ravilious was not the first painter to find in the landscape of south-east England something innate, both more profound and more evocative than mere topography. This trait is the subject of “Sussex Landscape: Chalk, Wood and Water” at the Pallant House Gallery in Chichester. It is a rich exhibition about Sussex exceptionalism – which other county has such an abundant artistic heritage? – and traces some of the artists who have been, and continue to be, drawn there.

The list is a long one: William Blake lived in Felpham near Bognor Regis for several years; Turner – who was a regular guest of the Earl of Egremont at Petworth House – and Constable both painted in Sussex; William Nicholson lived at Rottingdean; the Bloomsberries had Charleston Farmhouse; Paul Nash had a house at Rye; Ravilious grew up in Eastbourne; and on the roster rolls… each artist finding, in their own way, something personal in the Sussex landscape.

Among the earliest artists to take the county as their main subject were the Smith brothers – William, George and John – of Chichester. The exhibition has several of their mid-18th-century scenes of mills and rustics that are determinedly Old Master-ish, with the warm skies and stateliness learned from Claude Lorrain. William Nicholson in the early 20th century was drawn instead to the high places: the close-cropped grass and gentle undulations of the Downs suited his luscious painterliness and the liquid drags of his brush gave visual form to the words of another local resident, Hilaire Belloc, who wrote of “the line of the Downs/So noble and so bare”.

During the First World War, the Bloomsbury Group kept themselves safe in Sussex, where Duncan Grant and Vanessa Bell painted the garden and pond at Charleston in the bright colours and dabbed brushstrokes of French post-impressionism, as if paint could blot out both the inconvenience caused by the war and the sound of the guns they could hear floating across the Channel. Much better artists served in the trenches, and it was ironic that after hostilities ended the likes of Paul Nash, David Jones and CRW Nevinson headed, as if unconsciously attracted, to Sussex to regather their scattered wits, rather than retreating as far as possible from the battlefields to Cornwall, Northumberland or the Lake District. The county for them acted as soul food.

The exhibition also has room for a host of less well-known artists such as Eric Slater, who made wonderfully accomplished Japanese-inspired watercolour woodcuts around Seaford during the 1930s; and Ethelbert White, who travelled the lanes in a gypsy caravan and consequently imbibed his scenes at slow pace. And the many photographs of Sussex fields taken by the American photojournalist Lee Miller, who had recorded the Allies’ discovery of Buchenwald and Dachau, and the Jewish Lithuanian street photographer Dorothy Bohm, who was sent to boarding school in Ditchling to escape the Nazis, show how Sussex had a hold on the non-English too.

Such is the quality and variety of the pre-war work that many of the more modern images and sculptures struggle to compete (and they are given perhaps
a room too many). Nevertheless, Nicholson’s feeling for paint can be discerned in the pictures of Pippa Blake and others, while the printmaking and photographic traditions remain particularly strong.

The segue into modernity is best expressed in the work of Ivon Hitchens. In 1922, flush with the experiments of modernism, he painted Curved Barn (The Barn). It depicts a tiled building surrounded by trees in which every element sweeps and curves, with the planes prefiguring the linocuts of the Grosvenor School artists. The picture was, he said, “an essay in essential form”. Later in the exhibition, in two paintings from 1965 and 1973, Hitchens’ essential forms have deliquesced into floating and aqueous patches of colour. The genius loci of Sussex – the spirit of place that is so inventively expressed throughout this engaging exhibition – endured; what had changed was his painterly response to it.

[See also: Nick Cave interview: “I don’t think art should be in the hands of the virtuous”]

This article appears in the 30 Nov 2022 issue of the New Statesman, World Prince