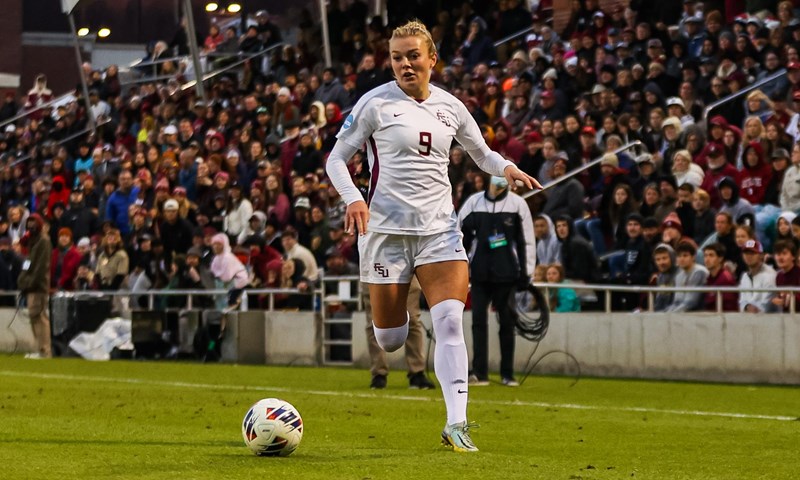 • A nation-best and conference-record five ACC teams advanced to the Elite Eight of the 2022 NCAA Women’s Soccer Tournament.

• The No. 1 overall seed Florida State advanced to the Elite Eight for the fifth-straight season and 17th overall following home wins over LSU (4-1) and conference foe Pitt (3-0). The Seminoles will host third-seeded Arkansas on Saturday.

• No. 1 regional seed Notre Dame extended its current unbeaten streak to 12 straight matches with wins over Santa Clara (4-0) and TCU (2-0). The Fighting Irish have yet to allow a goal in the NCAA Tournament, outscoring opponents 11-0. This is Notre Dame’s first trip to the NCAA quarterfinals since 2012, as it will face North Carolina on Saturday.

• No. 2 seed North Carolina earned its 16th trip to the NCAA quarterfinals since the field expanded to 64 teams in 2001. The Heels fended off Georgia (3-1) and BYU (3-2) to set up a date with Notre Dame on Saturday.

• No. 2 seed Duke earned its ninth trip to the NCAA quarterfinals in the last 11 seasons after it posted wins over Texas (1-0) and South Carolina (3-2). The Blue Devils head to top-seeded Alabama on Friday in search of their first College Cup appearance since 2017.

• After a 3-1 victory over Xavier in Friday’s second round, No. 3 Virginia sealed its spot in the Elite Eight with a dramatic 3-2 overtime win over host and No. 2 seed Penn State. The Cavaliers, who head to top-seeded UCLA on Saturday, are making their ninth trip to the quarterfinals and look to return to the College Cup for the second time in three seasons.

• After a 2-1 win over fifth-seeded Georgetown, No. 4 seed Pitt saw its postseason end when it fell to Florida State in its first-ever appearance in the Sweet 16.

• The ACC led the country with 10 bids into the 2022 NCAA Women’s Soccer Tournament.

• The ACC has had a team in the Women’s College Cup in 39 of the past 40 NCAA Tournaments and in each of the past 16 years. With the ACC’s five teams in the Elite Eight, the streak is guaranteed to continue.

• The ACC has 55 appearances in the College Cup – the most of any conference (the next closest conference is the Pac-12 with 28 appearances). Current membership combines for 67 appearances.