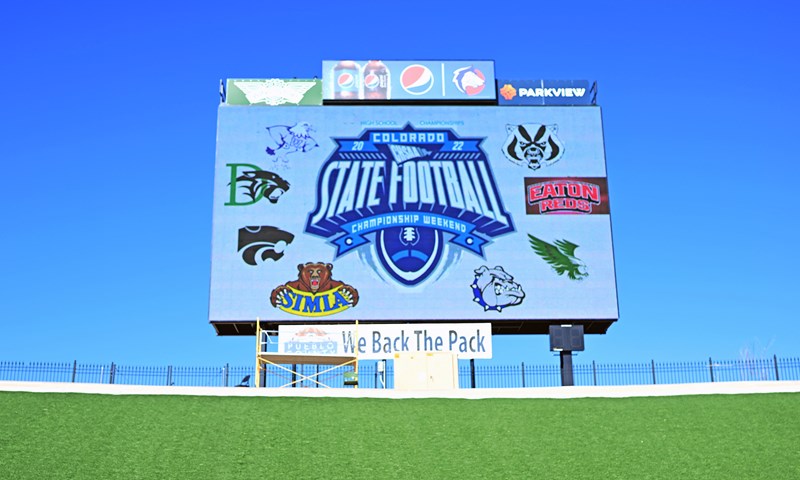 
PUEBLO – On Monday at the CSU-Pueblo Thunderbowl, the coaches and select athletes from the championship finalists in 6-man through Class 2A came from all corners of the state for the Championship Luncheon.

For the teams that will face one another for the state titles in their respective classifications in less than a week’s time, it was a chance to share a meal and celebrate one another’s programs as the last remaining in all of Colorado’s smaller school postseasons.

The event included a tour of the locker rooms and walkthrough of how things will go next Friday and Saturday, some opening comments from CHSAA assistant commissioner John Sullivan and CSU-Pueblo staff members, as well as local community leaders. The head coach from each team also had a chance to speak to give a little background on their teams and what it means for them to be playing on the final day of the 2022 football season.

“We’re probably the team that’s not supposed to be here,” Simla head coach David Guy said in front of the gathered players, rotary members, local business owners and CSU-Pueblo staff. “Maybe we’re like the Wedding Crashers and we just show up whether we’re supposed to be there or not. It’s a tremendous honor for us to make it this far. In 8-man football, there’s 42 teams and there are just two left. We are truly a player-led team, so I truly appreciate that.”

Though undefeated, the No. 4-seeded Simla Cubs reached the 8-man state title game by upsetting heavy favorite Haxtun in the semifinals on Saturday. They will face No. 2 Dove Creek in the championship game at 6 p.m. on Friday. Also on Friday, the 6-man state title game will feature No. 1 Stratton and No. 2 Fleming at 1 p.m.

In Class 1A, No. 1 Limon will be playing in the championship for the fifth year in a row and already has the most football state championship of any program all-time with 20. Opposing the Badgers this year will be No. 6 Wray, a team that is getting healthy at the right time and gave unbeaten Limon its toughest test of the campaign back on Oct. 8 during the regular season. That game will start at 1 p.m. on Saturday.

“We’re honored to play in this game,” Wray head coach Levi Kramer said via Zoom. “We’re going against the most storied program in the state of Colorado. He’s been my mentor for a very long time and a very good friend. He’s helped us out tremendously and it’ll be an honor to play against such a great program as well.”

In Class 2A, No. 1 Delta will face No. 2 Eaton in the title game at 6 p.m. on Saturday. Eaton has won the last two state titles and will be looking for its third in a row.