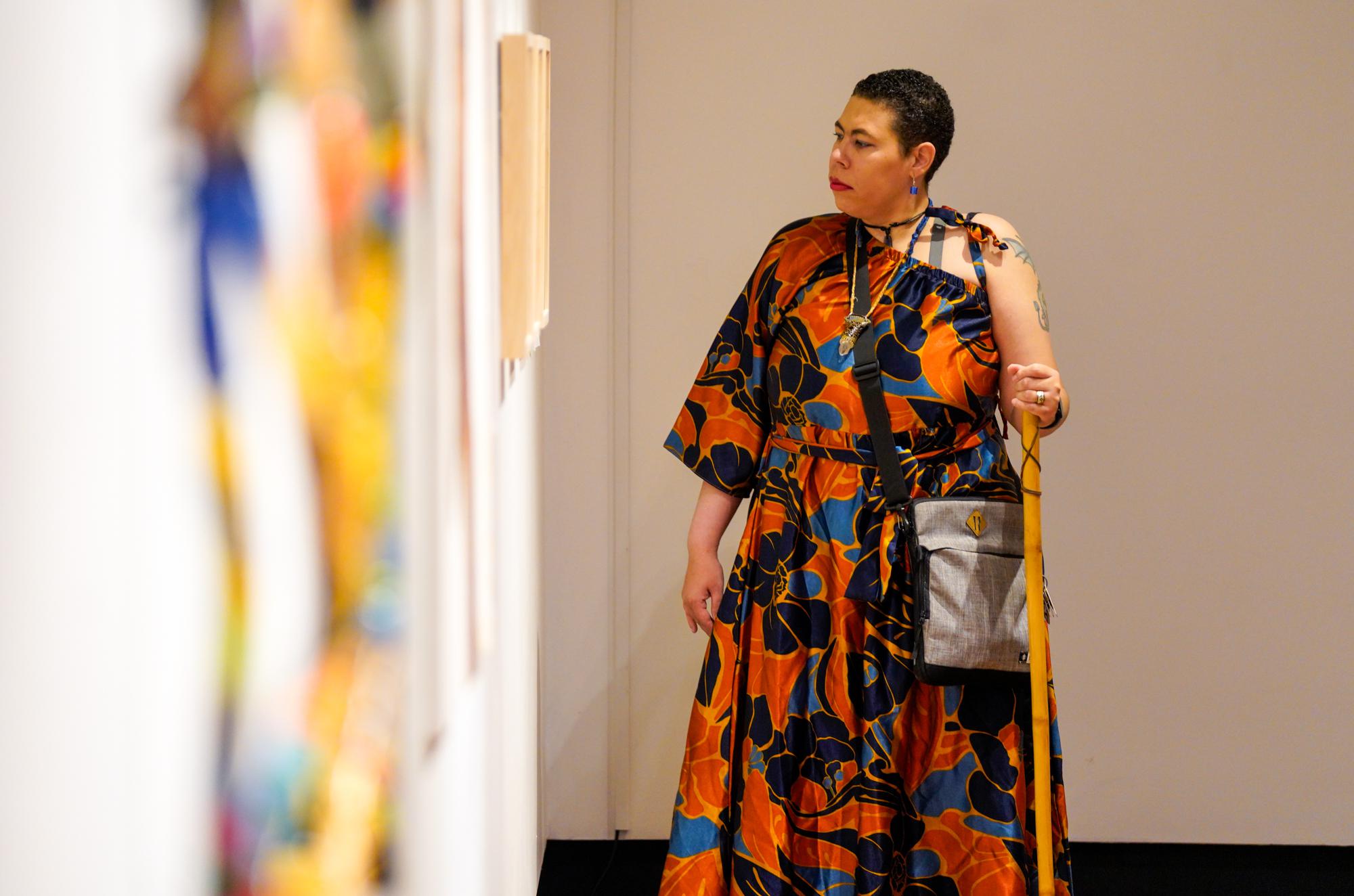 SAN ANTONIO — The long, cloth quilt hangs heavy with the weight of the past. Made of fiber and faux leather, it’s stitched with details that invite the viewer to linger.

Dates and words mark historical events of African American history. From 1619, when the first enslaved Africans were brought to America, to 1973, when the U.S. Supreme Court ruled on a woman’s right to abortion.

This is quilt maker Deborah A. Moore Harris’ reflection of America. Harris, an 11-year-Army veteran, has quilted for more than 20 years.

Her fraternal grandmother taught her to sew.

“I like the freedom of quilting,” Harris, 67, said. “I’m very vocal through my art. This is American legacy. Our history helps to form how we think and behave in the future. You can’t hide it — tell the whole story.”

Moore’s artwork is one of 36 featured in the exhibition, titled “Between Yesterday & Tomorrow: Perspectives from Black Contemporary Artists of San Antonio.” She’s one of 17 Black artists from San Antonio whose art will be on display through Nov. 17 at the Culture Commons Gallery, 115 Plaza de Armas.

Located behind City Hall, the gallery is managed by the city’s Department of Arts & Culture. The exhibition is free and open to the public. Viewing times are Wednesday through Friday, 11 a.m. to 4 p.m.

Barbara Felix, who curated the exhibit, said the diversity of art tells the story of San Antonio’s Black experience.

“There is a wealth of talent that San Antonio has,” Felix said. “And it’s wonderful that the city is giving this amount of time for people to come and see these works, experience different perspectives of all of the artists. In this multicultural city that we live in, these people are part of the fiber, and they need to be represented.”

Last week, a trio of artists met in the gallery’s long hallway and shared details of their works.

Kaldric Dow, 32, discussed the collage featured on his displayed portraits, “Dynamic” and “Wave King.” Dow is known for his fabric artwork and a Black on Black series representing Black culture. He’s used materials from Goodwill and fabric stores for textures that depict a range of lighting and skin tones.

Calvin Pressley’s oil painting, “Contemplating Flight,” features a figure sitting atop a building with untested feathers. He completed it while he was finishing his master’s degree at the Pennsylvania Academy of Fine Arts in Philadelphia. He called the 60-by-80-inch piece “self-referential,” created when he was ready to “take off and soar.”

“I feel honored to be part of a community I claim as my own,” Pressley said.

Don Stewart’s space featured three of his works, titled “Now,” “Serenity” and “Brain, What You Thinking.” He described his art as a figurative and narrative expression of the individual’s journey psychologically and socially. Stewart, an Army veteran, has taken part in several local exhibitions, including at the Carver Community Cultural Center, Galería Ortiz and the Eye of the Beholder Gallery.

On an oval canvas, he painted a brain centered over neurons firing in different directions.

“It’s taking it to a level most people won’t go to,” Stewart said of his piece. “It’s the actual function of the brain.”

Spokeswoman Lisa Jackson said viewers would be moved by the artwork she called intriguing and steeped with deep messaging.

“It’s a unique opportunity to showcase African American art in San Antonio,” Jackson said. “I appreciate the city giving a space for the artists to shine.”