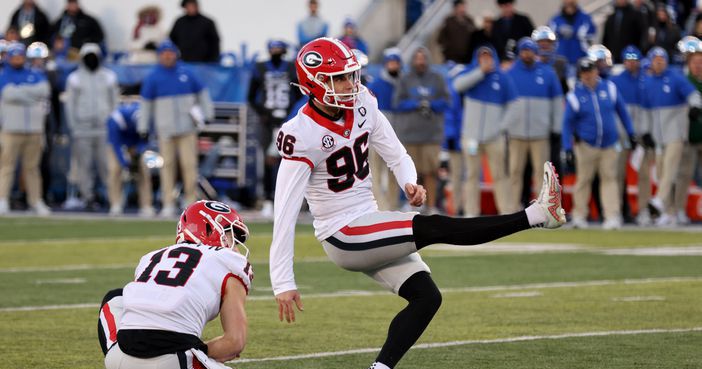 Welcome to Good Day, UGA, your one-stop shop for Georgia football news and takes. Check us out every weekday morning for everything you need to know about Georgia football, recruiting, basketball and more.

It wasn’t pretty on Saturday for Georgia. Yet the Bulldogs won another SEC game, besting Kentucky 16-6.

Georgia completed its SEC slate with an 8-0 record, something it did last season as well. Georgia becomes the third program in SEC history to go unbeaten in regular season play in back-to-back seasons, with Florida (95-96) and Alabama (08-09) being the others to do so.

The Bulldogs had already clinched the SEC East, yet they were able to go on the road and take care of business once again. On an afternoon where teams like North Carolina and Tennessee gacked away their playoff hopes, the Bulldogs’ run of consistency in SEC play should not go unnoticed.

“You see the environments these people are playing in,” Georgia coach Kirby Smart said. “You see that it’s different. You find out real quick who wants to play football and who’s just a football fan. You have to be able to win in games like that, especially in November.”

Georgia steps out of conference play this week to take on a surging Georgia Tech team. Given what we’ve seen from the Bulldogs this season, don’t expect them to overlook the Yellow Jackets. This program relishes every opportunity it has to play.

It’s worth noting that conditions were poor on Saturday. That much was clear on Stetson Bennett’s interception, as the wind seemed to get a hold of the ball and guide it away from Ladd McConkey and into the arms of a Kentucky defensive back.

“It was 16 to 18 (mph) with gusts of 25, so it was windy but it was more about what you can and can’t do in those conditions,” Smart said. “Again, I think it affected Kentucky. It affected us. The wind is blowing one way, you got to figure out out when you’re passing it, when you’re throwing it. We do studies all the time about how it affects games when the wind gets up around 20 miles per hour. It’s very different in the way you play the game.”

Related: Kirby Smart gets testy in defense of Georgia situational execution: ‘That’s my decision to make’

Bennett had a season-low 19 pass attempts, with the wind impacting Georgia’s play-calling. The Bulldogs were able to move the ball on the ground as they ran for 247 yards on the afternoon. But the inability to finish in the red zone — only one of Georgia’s five trips inside the Kentucky 20-yard line ended in a touchdown — made the score much close than it should’ve been.

Against Tennessee, the Georgia offense also downshifted when the rain became a factor. Obviously, the other team has to play in these conditions and that impacts the quality of football as well. But Georgia’s offense hasn’t been at its best when the weather is less than pristine.

If there is a silver lining, Georgia’s game against Georgia Tech will be the last outdoor game the Bulldogs play this season. The SEC championship game will be in Mercedes-Benz Stadium while both College Football Playoff games are indoors as well.

Kelee Ringo came down with an interception, while Javon Bullard and Robert Beal teamed for a sack of Will Levis. Save for a 99-yard drive in the fourth quarter, the Georgia defense did its job on Saturday.

And the sophomore linebacker deserves credit. He led the team in tackles with 11 and was all over the field on Saturday. He single-handily snuffed out Kentucky’s opening drive with back-to-back tackles on short-yardage situations.

Mondon has flown under the radar a bit playing next to fellow sophomore Jamon Dumas-Johnson. That Mondon also missed two games due to an ankle injury didn’t help his development.