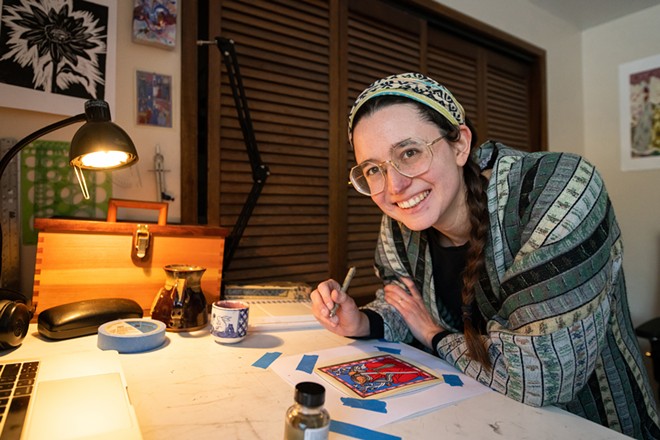 Due to history’s patriarchal perpsective, we may not expect feminist viewpoints from a time so long ago as the Middle Ages. Yet women who challenged the status quo have always existed, even then.

One such woman is Christine de Pizan, whose The Book of the City of Ladies was completed in 1405. The book, and the more than 100 historically famous and mythological subjects contained within, is the focus of an ongoing project by Spokane-based artist Hannah Charlton.

“She wrote it because she was really depressed about how men wrote about women,” says Charlton, who’s illustrating the 617-year-old book. “So it’s The Book of the City of Ladies because she’s building this metaphorical city for women to live and defend themselves from these attacks. She goes through all these ideas like ‘women aren’t good at studying’ or ‘women aren’t faithful,’ and she counteracts each of those with the story of historical or mythological women.”

In collecting each of her subject’s stories, Pizan argues that women are indeed valued contributors to society, and thus should be allowed to seek an education like their male counterparts. Familiar names from Greek and Roman mythology alongside religious icons and actual figures of ancient history — queens and nobles, saints and scholars — fill the book, which was only recently translated into approachable English in the 1980s, Charlton says.

“This book was so hard to get for so long,” she says. “You had to know this really weird, archaic French to read it, and so with a new translation it’s slowly making its way out” into the public sphere.

A 2014 Whitworth University fine art and history graduate, Charlton uses techniques and materials similar to what medieval scribes had access to well before the advent of the printing press. Depictions in original illuminated manuscripts, which are handwritten books or documents, typically include lavish illustrations, borders and other flourishes in addition to a central text.

Charlton uses a modern, plant-based parchment with qualities similar to the animal skin vellum originally used for illuminated texts. After sketching in pencil and tracing outlines in black ink, she paints each image with gouache (an opaque watercolor) and gold pigment, then a final coat of black ink for touch-up and to add details like facial expressions. The resulting images are two-dimensional yet filled with movement, symbolic details and rich color. Each character’s scene is set against contrasting gem-toned backgrounds of blood red, cobalt blue or a bubblegum pink; Charlton uses a color palette similar to what was available in the medieval period.

“In the original Book of the City of Ladies, there are only like three miniatures just for the chapter headings, so it was never really illuminated very thoroughly,” she says. “So another reason I want to do this project is because it has a lot of really cool, interesting characters. Some of them were really familiar, some of them are not, so it’s a way to sort of bring the book and all the women to the public.”

Since starting the project in 2020, Charlton has created 13 paintings featuring women from the City of Ladies, though each piece contains imagery for between two and four related characters, like the mythological witches Circe, Manto and Medea in one grouping, and the chain mail-clad warriors Joan of Arc and Camilla in another. Tragic romantic characters — Thisbe, Hero, Ghismonda, and Lisabetta, each posed in moments of defiance or lamentation — are also shown together.

These and her other paintings of the Ladies’ ladies were recently displayed at Spokane Art School’s gallery in a solo show. Charlton also regularly teaches classes there on the history and technique of illuminated manuscripts, among other local venues such as the Northwest Museum of Arts and Culture (her Dec. 10 workshop is sold out), public libraries and the Immaculate Heart Retreat Center in south Spokane County.

“I think it’s a great medium to work in, because so much of arts education focuses on realism, and that’s really intimidating, so it’s easy to think, ‘Well, I’m not good at art,’ but there’s thousands of years of art history to choose from, and this is a medium that I think helps people break down barriers a little bit,” she says. “Then at the end you have a painting, and it’s really fun, and it’s shiny and it sparkles.”

In 2020, Charlton received a $2,000 Spokane Arts Grant Award to research characters depicted in The Book of the City of Ladies, all documented on her website.

“The more I read, the more I realize that the past isn’t how we usually think of it, and also that people haven’t changed as much as we think, which is really reassuring,” she says. “Especially reading about Christine’s writing about her depression and her sadness, and her anger about how women are treated. There were medieval feminists who were upset about these issues.”

Charlton’s discovery of and subsequent focus on illuminated manuscript style-art happened by chance, but immediately felt like a perfect fit, melding her academic focuses on art and history. She had this epiphany while interning at the Grünewald Guild, a nonprofit art retreat in Leavenworth, and working to reproduce Gothic-style calligraphy.

“I wanted to put everything in practice, and everything just really clicked with the manuscripts in a really interesting way that I hadn’t experienced before. Everything made sense,” she recalls. “So I started learning more — there was always so much more to learn. I heard someone once describe working on a project and say ‘It’s like I was just standing on a bunch of diamonds, and I didn’t even have to dig.’ I was just picking them up!”

An invaluable source of reference and inspiration for Charlton’s art comes from the Morgan Bible, a well-preserved folio of 46 volumes from 1250 that contains more than 380 ornate illustrations of the Hebrew Bible, depicted from a French Christian perspective. The Morgan has been completely digitized for scholarly research, Charlton says, and is viewable for free online.

“I make all the designs myself, but like the heavy outlines, the drapery [of fabric] and the way hair is drawn, I got that from the Morgan Bible,” she says. “It’s been a fantastic tool.”

While Charlton’s series on Pizan’s Book of the City of Ladies is her focus now, she’s also created medieval art homages to other works, including George R.R. Martin’s A Song of Ice and Fire, the source material for the TV show A Game of Thrones.

“For Game of Thrones, I was taking the scenes and sort of trying to figure out how they would be depicted in an actual manuscript, like the gestures that would be used,” she says. “A fun thing about medieval art is that it’s OK for things to be really unsubtle, so you can have really dramatic hand movements and faces.”

Another series she’s completed is a medieval bestiary-themed alphabet, featuring both mythical and real animals, along with the Nativity, and figures from classic mythology.

When she’s not creating or teaching art, Charlton works as a paraeducator at a local middle school. Besides her recent solo show at the Spokane Art School, she’s had her work displayed at Terrain’s one-night showcase, Pottery Place Plus and the Chase Gallery in Spokane City Hall.

“Growing up, I always wanted to do fantasy art. I think that’s what interested me the most,” Charlton says. “Playing around with this, it’s fantasy, but it’s primary source fantasy. Isn’t it fun?” ♦

Select prints ($55-$60 each) from Hannah Charlton’s The Book of the City of Ladies series can be purchased at HannahCharltonArts.com.