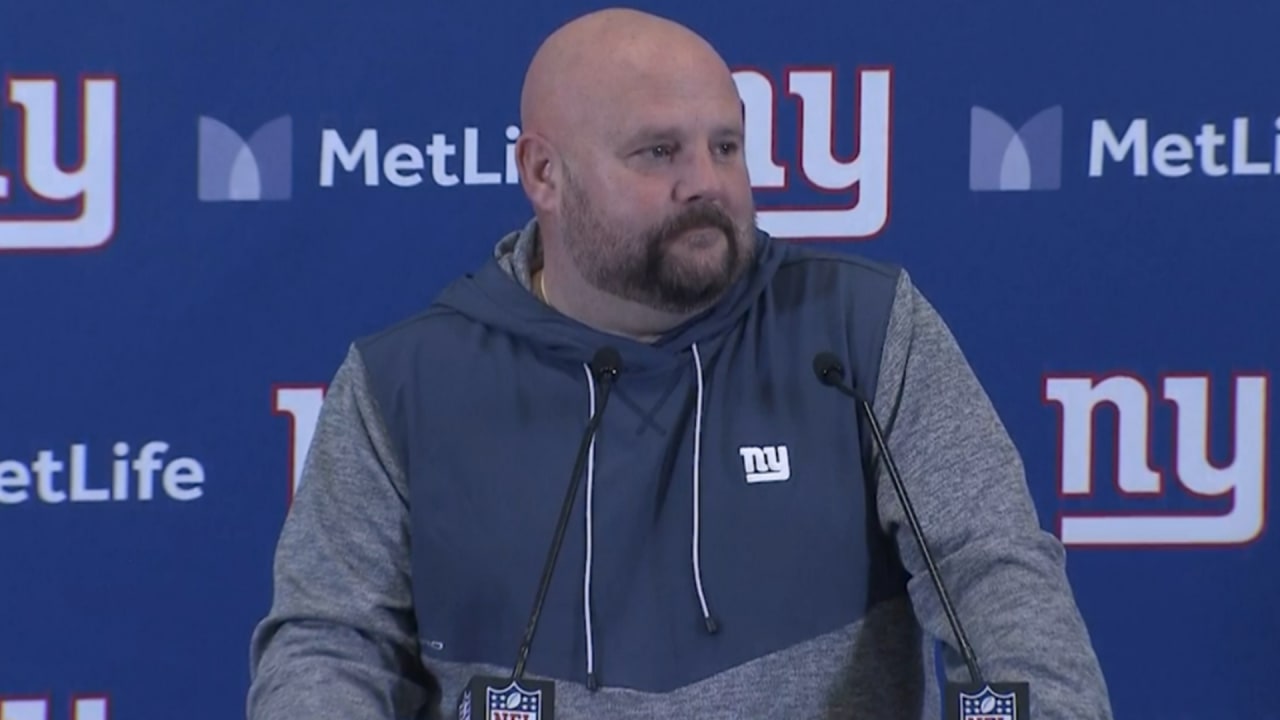 Q: What did you think of your team’s overall performance today?

A: I thought they played a good, complementary game. I think all the units played well. I think the coaches had them ready to play. Most importantly, they were ready to play from start to finish. And when you’re playing in higher-stakes games, as you guys reminded me all week, I thought they did a good job of just focusing on the task at hand and doing the things we needed to do to get a win. So, it’s good to get a win. I don’t have any injury stuff. Good to get a win.

Q: It seemed like (quarterback) Daniel (Jones) put this team on his shoulders today with his legs, his arm. Talk about what you saw from him and how big he came up in this big moment.

A: Yeah, played well. Very efficient in the passing game. Used his legs well. He’s done that all year, though. I’ve seen that all year from him.

Q: He’s had a challenging career until this point, Daniel has. Can you talk about what this moment kind of means for him?

A: I think that would be a good question for him. He’s a pretty level-headed guy. So, I don’t want to speak for him.

Q: Why the curtain call for Daniel?

A: Because I thought he earned it.

Q: What was the moment like for you when you got a Gatorade bath and you kind of gave the crowd a fist pump there?

A: It was sticky and wet (Laughs). It was good excitement, obviously. You work hard in this business to try to give yourself a chance to play extra innings or more games. So, we have done that. We put ourselves in a position to compete more than just one other game. So, excitement, sure. Definitely.

A: I don’t know; I’m just happy we won this game. Am I excited? Certainly, I’m excited. But I think you just got to stick with the process that got you here. Got to get ready to play another game. You know, the playoffs are a different breed. They’re one and done. But we still got one more game before we get to those. But we’ll stick with that. The players will have off tomorrow, Monday and Tuesday. And they’ll be back in Wednesday. So, usually we don’t give that at all. But I had Daniel break down the team, so he basically gave it to everybody without talking to me (Laughs). So, I said, ‘Turn the music back down. Okay, we’ll go with what Daniel said.’

Q: What was it like in the locker room after? You see these players, and they’re happy. They’re excited.

A: Absolutely. You work with these guys every day. A lot of them are my kids’ ages. Some of them have had some challenging times here. So, I’m extremely happy for the players, first and foremost, but the staff, trainers, ownership, coaches. Our goal – it’ll never be just to make the playoffs. That’ll never be just our goal.

Q: What did you think about (safety) Xavier (McKinney) out there today?

A: I thought he was ready to go. Rome (Defensive backs coach Jerome Henderson) came up to me, I think it was the second quarter. We had a plan for how many reps we were going to play him. And he was communicating with Rome (that) he feels good. And Jerome said he was playing good, so we ended up going with him until we took him out.

Q: He was going back into the x-ray room, McKinney was, it looked like. Was that just precautionary?

A: I do not know that. I don’t know. I haven’t talked to anybody about any injury yet. I hope so.

Q: When (inside linebacker) Jaylon (Smith) gets to (Colts quarterback Nick) Foles, did he pull off because he thought of roughing (the passer), or he lost the ball? Any explanation there?

A: Did you ever play basketball? Do you have a son or a daughter that are younger? And you play with them, and you throw it over their head. And then they look up at the net, and you still have it. That’s what I thought happened. He (Jaylon Smith) thought he (Nick Foles) threw it.

A: It was a good play. Ball was thrown inside. He was on it. It was funny. (Defensive coordinator) Wink’s (Martindale) done a great job all year. He called a really good game. I’ll just chime in there once in a while with my two cents, not on calls. Just I’m like, ‘Hey this one’s going to the house right here,’ before he called it. So, it went to the house. So, on the sack that, I think, (cornerback Nick) McCloud had, he’s going, ‘I’m going to one up you here: I guarantee this is a sack – probably going to be a strip-sack.’ But it was a sack. So, he didn’t get the strip-sack. So, I think I won that one.

Q: What did John Mara (president and chief executive officer) say to you after the game, if anything?

A: He said, ‘Congratulations.’ We just went in there. We talked like we normally do. There’s music playing. The reason why I was a little late was (because) I couldn’t sit in that Gatorade. So, I had to take a shower. I’m like, ‘(Senior vice president of communications) Pat (Hanlon), I’m taking a shower right now. I’m so sticky.’ So, obviously, he (John Mara) was excited. He was happy, smiling. So, again, I’m very thankful for the players. But again, we made the playoffs. And I credit the players and the coaches and, again, the support staff for all their hard work. But hopefully, there’s a long way to go here. But you got to take it one game at a time. Like I’ve told you before, it’s a humbling league. We’ll have one more, and then if you lose, you’re done. You win, you keep going.

Q: How much of your post-game message to the team was, ‘Congrats, but we’re not done,’? Because it sounds like you’re saying that right now.

A: No, I just said, ‘Congrats. Let’s be a pro. Let’s be smart tonight. It’s okay to be happy. You’ve achieved the first goal of probably every NFL team — to make the playoffs.’ Like you don’t start a season and go, ‘Oh, boy. I hope we win five games.’ I think we’re all competitors. It doesn’t always go that way. You go through a lot of difficult times during the season. So, I said they should enjoy it, but let’s be smart outside the building. Let’s not ruin anything that we’ve been building towards. And this is the most important time of year. Now we’re in January. So, do the right thing. You did the right thing on the field. Let’s do the right thing off the field.

Q: A lot of these players have lost a lot before you got here. What was it like to see, in the locker room, the joy of some of those veterans, especially, who haven’t tasted this at all?

A: Obviously, this is a big win because we clinched a playoff spot. But that’s what I like most about coaching is the relationships. But seeing that two to three minutes in the locker room when it’s just the team of all the hard work they’ve put into it to try to get a result that you hope for. And I’m very thankful and appreciative for all the players, the staff, the coaches. But to see smiles on the faces, that’s the best time of the week for me is the two to three minutes after a game when you watch these people put so much into it to try to get a result you want. And it’s hard every week to do. So, enjoy it. And then let’s get back. I wanted to come back on Tuesday, but we’ll come back on Wednesday.

A: You would know better than me right now.

Q: You’re six (seeded). So, Daniel’s given them a couple days off. Any thought to, ‘we got to pull back on some guys this week. Or rest (them)’?

Q: Will you give yourself any rest?

Q: When you say no, is it that you haven’t thought about it yet? Or no that you’re going to play all the starters?

A: I haven’t. I’m just going to enjoy this one right here – go home and smoke a cigar and hang out with my family.

A: Yeah, again, that’s where the game starts – up front. The guys don’t normally get their names in the paper or a bunch of articles written about them, but they do the dirty work that they need to do. And they played some really good guys up front. Those two tackles (DeForest Buckner and Grover Stewart) are really good football players. And I think, he (Daniel Jones) didn’t get sacked, right? No. And I thought Daniel made some loose plays with his feet, too. You know, with a couple action-type passes that he chose to run on a couple of them and made a couple good reads on some runs. And (running back Matt) Breida finished it off pretty good. I thought him and (running back Gary) Brightwell were running hard on some of those outside runs. And (running back) Saquon (Barkley) was running hard. Saquon is – he’s always coming to the sideline, and you can see it in his eyes, every time he touches the ball, he wants to go 80 (yards). So, I’m like, ‘Hey, buddy. That was a really good two-yard run.’ And he’s (gets really upset. So, I’m like,) ‘Relax, pal. It was a good two-yard run. It’ll come. Let’s not go outside of doing what we need to do.’ But again, it was a good team win. Everybody contributed. Everybody contributed today.

Q: When you think about the beginning of the season, the style of play that you wanted the team to be known for, do you feel as though that’s how they’re playing right now?

A: Yeah, we try to be smart, tough, dependable. Be in the right spot; be where you’re supposed to be when you’re supposed to be there. Have the playbook down for that particular week. Understand your opponent. And then fight through, whether it’s some mental toughness things, throughout the week or physical toughness things. Again, I’m not going to stand up here and give a critique of the season. I do appreciate the question. I think we’re competing. We’re playing hard. It’s not always perfect. Certainly, (there’s) things we could all do better. But I think they played a good game today.

Q: The quarterback is the most impactful guy on the team, right? He touches the ball more than any other player.

Q: How much is that a box for Daniel to sort of check there? Like, people put wins and losses on quarterbacks. And now he led you to the playoffs.

A: It’s the same. He played a good game. He’s been playing a good games for a while, since we’ve been here. So, he’s making the right decisions, throwing it where he needs to throw it, taking off with his legs, playing good situational football. That’s what we need from him week-in and week-out.

Q: What did you say to Haddy (outside linebacker Jihad Ward) on the sideline before? You said something to him. You turned around, and then he sprints back to the Gatorade.