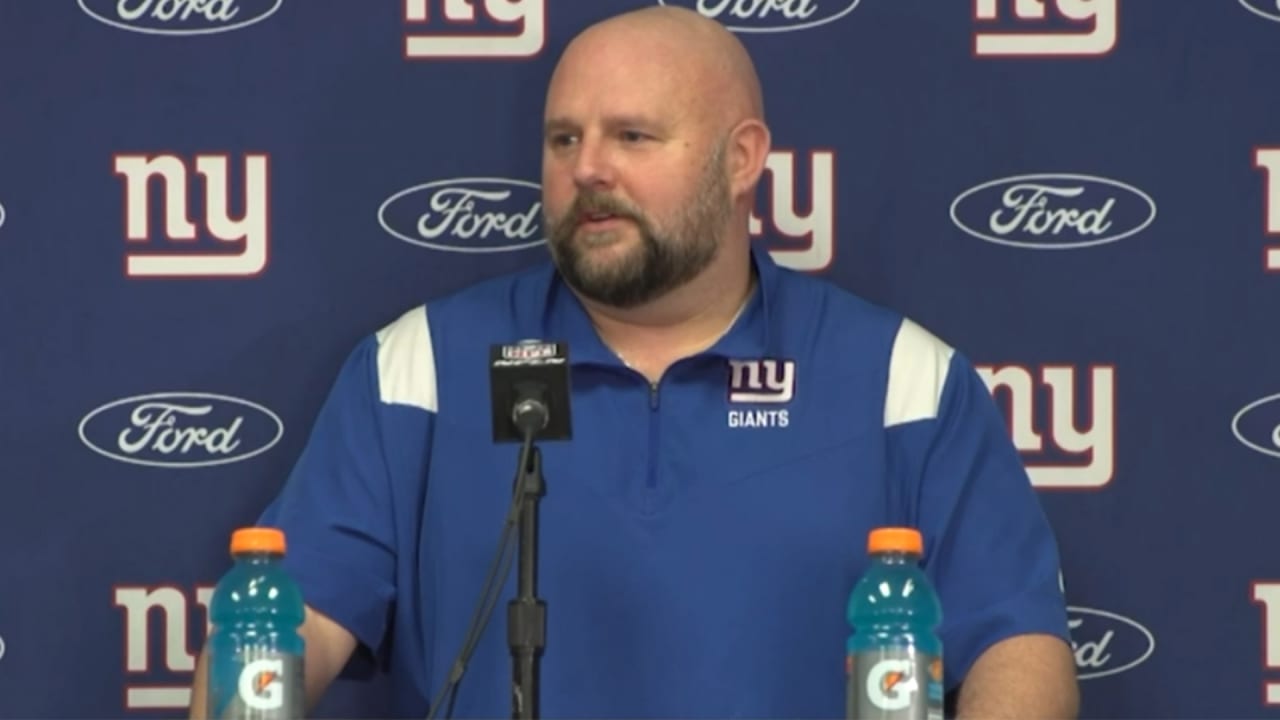 Brian Daboll: It was much like last game, came down to a few plays. Made a few more than they did, and we get to move on here. So good game, trip back and get ready to play Philly here.

Q. How about holding the poise the way they did in the hostile atmosphere?

A. Yeah, we were here last time. We knew what it was going to be. Crowd is great here. Atmosphere is excellent. It was cranking today. I think the most important thing are the things you need to do when you’re playing in those type of environments, the others, you’re going to hear it but you get your calls in quickly, make sure we’re in the right formation huddle-wise, communicate personnel. All those things, that’s what makes the difference. Coaches, players, did a good job.

Q. Can you describe the way Daniel Jones played today?

Q. You really gave Daniel the ball today. Saquon caught the ball but he didn’t run it a lot, Daniel running, Daniel passing, you seem to be understating how well he played in the situation?

A. Wasn’t good a good adjective to use?

A. I’m not a writer, I’m just a coach so, look, Daniel, I’ve said it all year. He’s been good for us. Continues to be good for us. He played a good game. I think there was a lot of other people that played good games to help him play a good game and he’ll be the first to admit it. But as a leader on our football team, I’m proud of him.

A. I would say the game plan that we put together on offense was the game plan for the game. What we did is what we wanted to do. There’s always adjustments but I thought (Mike) Kafka and all the assistant coaches had the guys ready to play and thought they called a really good game.

Q. What did you see in the catch by Hodgins on the last drive of the game?

A. The one where it was close? They were telling me upstairs, he might have it and I said just go to the line and quick on the next play. I don’t think you risk it, if you can get it off there and go, that was a big play in the game. We threw the challenge for that but they gave it back to me because they went and re-spotted, anyways, on the fourth down. Yeah, it was a good team effort today.

Q. What did you guys do against Jefferson, 7 for 47 and nothing after the first drive?

Q. Two fourth-and-ones, any consideration to kicking in either of those spots?

Q. The touchdown run that put you guys ahead —

Q. The one where he ran and just powered him in the end zone, I know you’ve seen that from Saquon all year but is that as much desire and drive that you want to see in that situation?

A. Absolutely, yeah. Only need a couple yards to get it in and put it in his hands, and I thought he did a great job. The guys pushed him and kept his legs driving. Good play.

Q. What about the declining that holding penalty, they would have second and 19, what was the thought process there?

A. It’s what we thought was best for the team.

Q. After the drop Darius had on the third down, what did you say to him?

A. I said, “Put your head up.” He made a lot of good plays for us. That could have gone a ways — at least first down. He’s such a good teammate, he’s done everything he can do for us the entire year. You make a physical mistake, that’s going to happen in football and he made one at a critical time and there’s no one that felt worse than him. So we need him. He’s one of our best players on offense. I have a lot of confidence in him and I just told him to get his chin up and we need him to go back out there and he’s ready to go.

Q. He seemed pretty anguished on the bench, Darius.

A. Yeah. I mean, he had an opportunity and just quite didn’t connect. That’s how much he cares about the team. Again we’ve got a bunch of guys like that.

Q. What’s the feeling, your first opportunity to win a game in the playoff as a head coach, not only for you but for that locker room that has been through some lean years.

A. Yeah, I know I’m happy. I’m happy for the players first and foremost. They are the ones out there doing it between the lines. Happy are to the coaches and scouts, ownership. You know that’s why you do this, you play these type of games and there’s not really a lot of time to reflect on these games. I don’t know when we’re playing, I guess it will be Saturday, not that anybody’s told me that. But we’ve got to get home and start grinding away this time of year.

Q. What was your message to them in the locker room afterwards?

A. Congratulations. Good team win. Get showered and let’s get out of here.

Q. When the game ended, the camera showed you looking to the sky and taking a moment, what was on your mind there?

Q. Was it the moment that you had in the first game?

Q. You guys made — I think back to the Ravens game when Mark Andrews killed you all game long, you made a couple coverage changes.

Q. Mark Andrews, you guys seemed to switch up the coverage lane and put McKinney on Hockenson and he punished you all game long. For McKinney to make that play in that situation what does that say not only about him but you guy defensively making that?

A. Yeah, that’s our job as a coaching staff to make sure we are making adjustments as the game goes on. Maybe throw more, run it less, put a different down on somebody. I’ve got a lot of confidence in Wink and the defensive staff and that’s something that we talked about after he hit a little short post on it, and we put X (Xavier McKinney) on him. Good to have X back, good to have Adoree’ back, good to have all those guys back.

Q. What do you say about Adoree’, missing seven games and going out there to cover Justin Jefferson.

A. He’s a good player. He’s a pro and done it a long time. I’m glad he’s on our team but I don’t — that’s what the players now try to do, when they are ready to play, play good. When you’re a good player, play good, no more, no less.

Q. Last time you were here, two turnovers, you kept on pointing to them, Daniel had his hands on the ball a lot running, passing, you guys didn’t turn the ball over once, that was obviously going to be a critical thing for you?

Q. That’s the trust that you have in him to protect it and not throw it away, those kind of things?

A. Absolutely, he’s done it all year.

Q. Seemed like a lifetime ago but what was the delay like in the beginning of the game, when they told you you would have to wait? Just hanging out in the locker room?

A. Ate a banana, drank a half bottle of water and went out there.

Q. Any idea on Ojulari? Is it serious?

Q. What do you think about getting a third crack at the Eagles?

Q. What does it say about your team that the key plays made late are by Cor’Dale Flott, Dane Belton?

A. Kenny Golladay – did you see that block? Everything is team. It’s all about our team. It’s not an individual sport. But individuals have to play well and when they get their opportunity, they have to make the most of it, whether it’s five plays, 70 plays, you know, coach, player, trainer. We’ve all got jobs to do and I expect those guys from their work ethic, their commitment to the team to go out there and give it their all.

Q. But everybody expects the guys to do that. Why are your guys actually doing it? Why do you think?

A. I mean, we work hard. We’re a scrappy bunch. We work hard. Certainly a lot of things we can always get better at but there’s a good amount of humility in that room of just play the next play. No one is bigger than the team, execute your assignments. And I’ve talked a lot about this before again. Preparation, practice, things that we’ve done, you know, I know we rested those guys last week — but something like that we thought was best for the team. I thought the guys were fresh, ready to go. But next week is a new week. You’ve got to enjoy this one in less than 24 hours, these type of games.

Q. You mentioned Kenny. With the season that he’s had, it would be understandable if he went into a shell, he’s not playing a ton but seems like when he gets out there, what does it say about him?

A. That he’s a competitor. He’s kept his head down and worked as hard as he can and when his number is called, he’s tried to do the best job he can. I’ve got a lot of respect for all the guys in our room, all of them.

Q. I was going to say, the last time you played Minnesota, you didn’t have a lot of design runs for Daniel, only ran the ball four times. What did you say that made you come back and say, that’s a big part of our game plan?

A. There’s a few designs, obviously, there’s some scrambles. I think that for this game we thought that was something that maybe we didn’t do at all last game that we thought would be a new wrinkle. Some people have seen us do it. We have a wide variety of them. You know, there’s games we’ve done a lot, games we have done a little and we just thought this would be a good time, like all the games we game plan for, if it gives us a chance, if it doesn’t, only have 65, 70 left in the season so better make them the ones that you think are going to work.