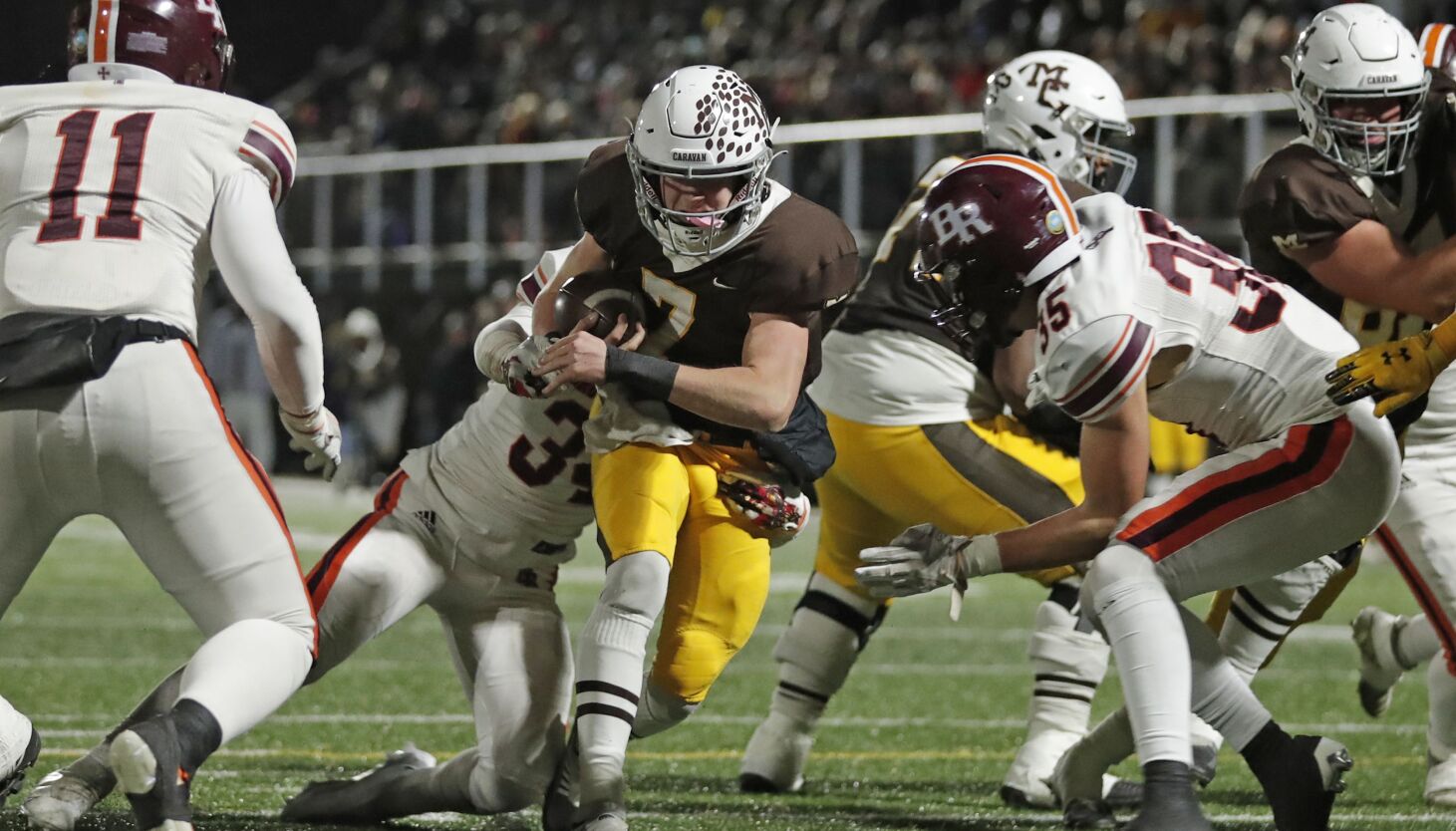 Undefeated, top-ranked Mount Carmel certainly remembers last season’s thrilling win against Batavia in the second round of the Class 7A state playoffs.

There were two controversial pass interference calls and the Caravan eventually won on an untimed down. But Mount Carmel has moved on. Quarterback Blainey Dowling is a completely different player, stronger and much more dangerous.

The loss has lingered in Batavia.

“That was a very emotional game for our program, our community and our kids,” Bulldogs coach Dennis Piron said. “I pretty much heard about it every week for a whole year. If anything I’ll be glad we are done talking about it.”

Batavia doesn’t seem obsessed with revenge against Mount Carmel. It’s a state title game and that is always a special moment for a community, especially a football-crazed place like Batavia. But matching up against the Caravan again adds some spice to the game, which is at 4 p.m. on Saturday in Champaign.

“[Jansey] is like a comic book hero,” Piron said. “He’s special, playing terrifying linebacker and powerful running back. He took some criticism after last year’s game. It wasn’t always nice.”

Mount Carmel (13-0) has been extremely difficult to run against this season.

“We are built on our front seven,” Caravan coach Jordan Lynch said. “They are physical and they fly around.”

Denny Furlong and Alonzo Manning have stepped up and helped fill the void after Mount Carmel star running back Darrion Dupree was injured. But the biggest offensive sparks come from the passing game now. Dowling has been fantastic, throwing for 2,719 yards and 39 touchdowns with just six interceptions.

It’s difficult to see Batavia scoring enough points to pull off the upset, but anything can happen in a state championship game.

Lincoln-Way East (13-0) is undefeated, but Loyola (12-1) is the favorite. Mount Carmel is the only team that has challenged the Ramblers this season. Loyola trounced unbeaten York 30-3 in the semifinals.

Colgate recruit Jake Stearney (2,149 yards passing with 34 touchdowns and three interceptions) is an experienced, effective quarterback and the Ramblers keep finding new faces to step up for injured running backs. Sophomore Luke Foster will likely be the featured back in the title game.

“He’s played outstanding,” Loyola coach John Holecek said. “Every game I’m more astonished by what he can do. He’s just a monster, fast and strong. He has an offer from Colgate but I think he’s more of a Big Ten kid.”

The undefeated Griffins lack star power and big-time college recruits, but any doubts about the team were obliterated in the semifinals when they dominated Glenbard West 31-7.

“There’s no AJ Henning in the group,” Lincoln-Way East coach Rob Zvonar said. “It’s more regular kids getting the most out of themselves and enjoying and loving playing together as a team.”

Running back James Kwiecinski is averaging 115 yards a game and has scored 26 touchdowns. He’s the workhorse for the offense but receiver Jimmy Curtin and quarterback Braden Tischer have built a solid connection throughout the season with 10 touchdown passes.

“[Jake Scianna] is the heart and soul of our defense,” Zvonar said. “He has 200 tackles and is the best middle linebacker in the state in my opinion. His two brothers played for us in state championship games as well.”

Once again, it is a Fox Valley conference team against East St. Louis. Cary-Grove upset the Flyers last season. This is the sixth consecutive year that either Cary-Grove or Prairie Ridge has reached the 6A title game.

As usual, the Flyers are favorites. But East St. Louis coach Darren Sunkett isn’t thrilled about facing another team that runs the triple option.

“It’s an offense that not many teams run anymore,” Sunkett said. “We have our work cut out for us. There is no way to simulate what they do offensively. The main thing is to figure out their blocking schemes.”

Tyler Vasey, the Wolves’ quarterback, is a major Player of the Year contender. He’s rushed for 3,776 yards and 52 touchdowns.

East St. Louis (11-2) hasn’t lost to a team in Illinois. The Flyers are loaded with college prospects and have only been challenged once all season, when they beat Lemont 32-29 in the semifinals.

Nazareth’s road to Champaign was bumpy and at times, unlikely.

“When we were 2-4 one of my assistants mentioned something about playoffs and I busted out laughing,” Roadrunners coach Tim Racki said.

Nazareth’s young group closed the regular season with a four-game winning streak and didn’t let up in the playoffs. The Roadrunners knocked off Boylan, shut out Morgan Park and survived 10-7 against rugged, unbeaten Sycamore.

Racki’s philosophy was to encourage his team and try to stifle any instinct to yell and bring the group down. That’s the typical approach of young coaches and it seems to be the best way to reach the current generation of players.

“I knew I had a bunch of young guns around me,” Racki said after the Morgan Park win. “Everybody thought I’d be yelling at them after the losses. I kept picking them up. Telling them what they did well and what they did wrong and they responded to that.”

Sophomore quarterback Logan Malachuk has thrown for 2,233 yards with 14 touchdowns and nine interceptions. He’s become more of a running threat this season, with five touchdowns on the ground.

Nazareth’s defense is deceptively strong. St. Rita, Lemont and Marist (all powerhouse programs in bigger classes) put up points on the Roadrunners but that hasn’t been the case in Class 5A. Nazareth shut out Kankakee in the season opener and allowed just three touchdowns in three playoff games.

The defense will get all it can handle on Saturday in the Class 5A state title game in Champaign. Peoria (12-1) is averaging 55 points in the playoffs and beat Morris 76-56 in the semifinals.

Running back Malachi Washington has 47 touchdowns and 3,073 yards rushing. Quarterback Tino Gist has thrown for 2,241 yards with 29 touchdowns and nine interceptions.

Expect a shootout in the first game of the day on Saturday.

There are local teams in the last two championship games on Friday. Here’s a look at those matchups. We’ll have a preview of the Class 8A, 7A and 6A games tomorrow.

The Celtics (9-4) plowed through the toughest road to the title game. They defeated defending state champions Joliet Catholic (a team that beat them in Week 4), Richmond-Burton and St. Francis. It wouldn’t have been a surprise to see any of those three teams in Champaign.

“He’s an animal,” Plantz said. “He’s not the biggest kid on the field but you are gonna feel his pads if you are on the other side of it.”

IC Catholic is a familiar face in the state finals after winning Class 3A titles in 2016 and 2017 and the Class 4A title in 2018. The Knights only loss this season was a one-point defeat to Joliet Catholic and they are the favorites against Williamsville (12-1), a school 14 miles north of Springfield.

KJ Parker and Denzell Gibson are dynamic threats on both sides of the ball for IC Catholic. They’ve combined for 37 touchdowns. Parker has 33 receptions for 996 yards and Gibson is averaging 9.6 yards a carry.

“[Gibson] can do everything,” IC Catholic coach Bill Kreft said. “He’s one of the best athletes to come through IC and can jump from running back to receiver.

“We get Parker as many touches as we can. He could be our whole offense, he’s that explosive. He’s selfless and blocks his butt off on the edge.”