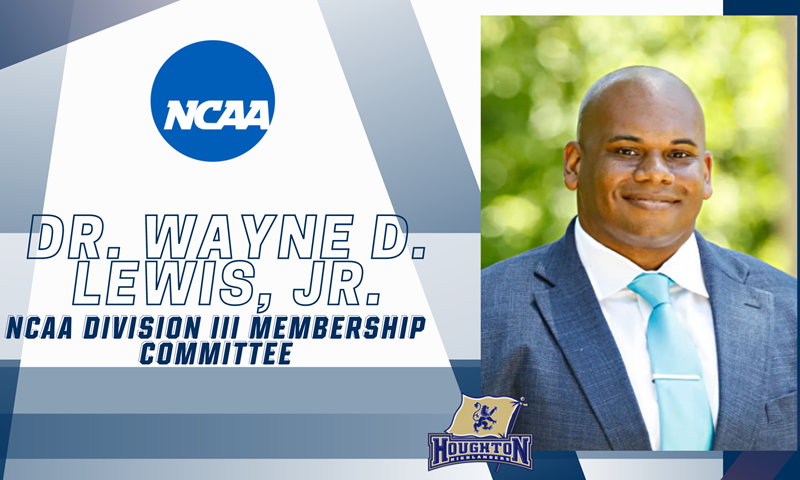 The Membership Committee oversees the provisional and reclassifying membership process; oversees programming and resources for the education of active members; and reviews waiver requests of membership requirements.  The committee meets in-person twice each year in February and June and conducts monthly teleconferences. Lewis will serve a four-year term on the committee.

It is an honor to serve the association and Division III on the Membership Committee,” said Lewis, who was named Houghton University President in 2021. “Division III athletics provides life-enriching opportunities for our student athletes. I am proud to represent Houghton University’s athletics department and the incredible student athletes and staff of the Empire 8. I will work to represent them well.”

“Dr. Lewis has been highly engaged in athletics and Empire 8 since his arrival to Houghton,” said Empire 8 Commissioner Chuck Mitrano, who also serves as the Division III Championships Committee Chairperson. “His innovative leadership and diverse educational experiences will greatly benefit the NCAA Membership Committee.”

Lewis has over 20 years of experience in education. He arrived at Houghton from Belmont University where he served as the inaugural Dean of the School of Education. Lewis has also served as the Commissioner of Education for the Commonwealth of Kentucky, overseeing an agency with over 1,100 employees and a $5 billion annual budget while also a faculty member at the University of Kentucky. Prior to that, he taught in K-12 public schools of Louisiana and North Carolina.

ABOUT THE EMPIRE 8 CONFERENCE

The members of the Empire 8 Conference are committed first and foremost to the pursuit of academic excellence and the league is regarded as an outstanding NCAA Division III conference. The membership has distinguished itself among its peer group for its quality institutions, spirited and sportsmanlike competition, outstanding services and highly ethical policies and practices. Its commitment to serve the educational needs of its student-athletes is the hallmark of the E8. For more on the Empire 8 visit www.empire8.com.