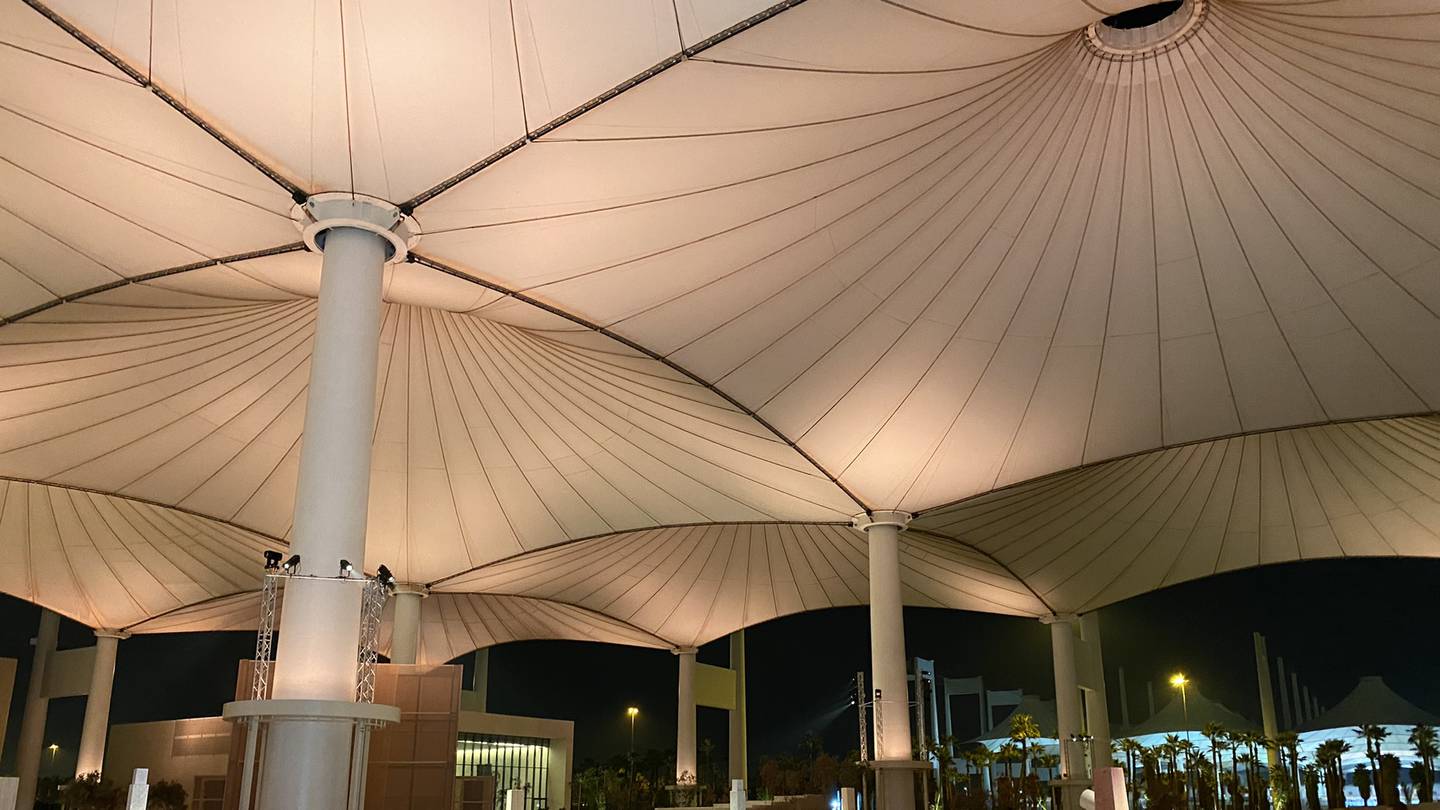 Planes roar over the storied skies of Saudi Arabia, drawn by the immutable call of the soul along the ancient pilgrimage route once trodden by trembling feet and convoys of camels.

Though pilgrims continue to pour into Jeddah’s Eastern Hajj Terminal, just beyond a barrier of palm trees, a very different congregation gathers at the adjacent Western Terminal — watching stars cluster through holes in the canopy of the 1983 Aga Khan Award-winning structure designed by Skidmore, Owings & Merrill.

The inaugural Islamic Arts Biennale held its opening ceremony on Sunday night, inviting visitors from across the world to explore an awe-inspiring array of contemporary artworks and rare artefacts, converging at the gateway to Makkah.

Come morning, streams of visitors flocked to the site, to experience a watershed moment in the history of Islamic arts and culture. Titled Awwal Beit, or “First House”, the inaugural biennale explores the roles of home, space and belonging in the Islamic faith.

“When you’re able to share a connection that goes beyond race and beyond geography, but remain connected in values and belief, I think that’s very special,” the biennale’s artistic director, Sumayya Vally, co-founder and principal of the architecture and research firm Counterspace, tells The National.

Working alongside co-curators Julian Raby, Saad AlRashed and Omniya Abdel Barr, Vally drew inspiration from her personal experiences of the Hajj Terminal. “I remember being so vividly struck and flooded with memories of being on the site as a pilgrim, as a Hajji, and seeing the world gather under this infinite canopy. This is really a welcome area and the reception for the entire world.

“I remember distinctly seeing people lead each other in prayer groups; people who had clearly been waiting for hours and hours, sharing food; sounds and accents from around the world — this really immense sense of community.”

It is precisely this sense of belonging that the programme seeks to explore — particularly the “first principles of belonging” that pre-date later aesthetic developments, such as domes and muqarnas, a form of ornamented vaulting.

“In the absence of any infrastructure, how do people come together and gather after displacement? I think that spirituality is found in ritual practice. It’s not necessarily found in any ornate or overt construction alone, it’s really in rituals and a sense of spirituality; it’s our festivals, and it’s how and who we commune with that really brings to life the sense of community.”

Tethered to the strands of Qiblah, or sacred direction and Hijrah, migration, the programme explores the roles of the sacred cities of Makkah and Madinah through a series of contemporary art works, curated in tandem with some of the rarest and most precious Islamic artefacts in existence — many of which have never been seen by the public.

“Qiblah means direction, so the theme of Qiblah is really thinking about these invisible lines of direction that pull us towards a magnetic centre,” says Vally.

“For me, it was important to convey the idea that from the molecular level, to the scale of the infinite, every time we’re standing up in prayer, we’re connected with people past, present and future who have done the same and who have faced this exact same direction.”

“I could imagine an anthropological museum could discuss prayer, but it would be a very dry to scripted thing about the feelings.” Contrary to this, the Islamic Arts Biennale, he says, “is very much about the emotional side of some of these rituals”.

The biennale experience begins in darkness, and works its way towards the light, said to be mirroring the journey of the soul. As visitors enter, they encounter American-Lebanese artist Joseph Namy’s new commission, Cosmic Breath — where a series of recorded calls to prayer from various countries and times are played in unison, presenting an eternal, undulating call.

Across the room, a series of photos titled Epiphamania: The First Light by Saudi artist Nora Alissa depict pilgrims around the Kaaba, captured from beneath her abaya. Captured from ground level, the images draw the audience into the experience itself. “This connection to the centre is how the biennale opens,” says Vally.

The two works also sit in conversation with what Raby calls “one of the greatest astrolabes of all time”, which points towards Makkah; a reminder of the huge contributions that Islamic philosophies have made to the arts, astronomy, mathematics and geometry.

Further afield sits Saudi artist and researcher Basmah Felemban’s commission, Wave Catcher, an installation that materialises the athan into a series of waveforms — evoking the breath that Muslims take in between each verse, and word. “That is, in itself, a form of cellular meditation that happens in the body,” says Vally. The project takes its cues from the Arabic word buhur — which literally translates to seas — used to describe the poetic meters that govern the athan’s phrases, pitches and inflections.

Growing in scale, the biennale moves through the themes of wudu, or ritual purification, and water. Morrocan artist M’barek Bouhchichi’s new commission Kolona min Torab, Everyone is from Earth explores the beauty of Islamic diversity with works of fired clay of various colours, gathered from across Morocco. Vally says, when placed together, the shades “evoke all of us standing together in prayer”.

The biennale later arrives at a work by South African Igshaan Adams, who collected used prayer mats from his home in the Bonteheuwel district of Cape Town. Adams has recreated these, along with their signs of use, as part of a new collective tapestry, titled Salat al-jama’ah, using cotton thread, dye, wire, beads and semi-precious stones.

Vally says: “This work is really about a community that has found strength and solidarity and resilience, despite very difficult conditions, through their faith.”

Elsewhere, Haroon Gunn-Salie, also from South Africa, expands on an existing work, Amongst Men, which centres on the funeral procession of Imam Abdullah Haron, a Muslim community leader who was killed by apartheid police in 1969. The work includes 1,000 cast kufiya hats, worn during prayer, alongside funeral readings from his daughter and widow. Vally says the piece explores acts of kindness and justice as acts of worship, adding “these are the things that we leave behind us after we die”.

From Haroon’s work, visitors are swept through a remarkable set of tombstones, gathered from the most ancient Islamic cemetary in the world, Al Mualla in Makkah, and curated by AlRashed.

The space provides a moment of reflection, before they are immersed in a completely white space, paving the way to a moment of wonder; a glimpse at a historic Kaaba door. The biennale features two historic doors, including a marvellous specimen in teak and gilded silver that replaced an older door damaged by flooding in 1630 on the order of Murad IV and remained in place until 1947.

Outside, the biennale delves deeper into the myriad forms of gathering and community — especially in relation to the Hejaz as a centre of cultural exchange. One example, Anywhere Can Be A Place of Worship, by Syn Architects, presents an architectural intervention built from palm reeds, sand and other natural elements. Vally says the site reflects on the earliest musalla, or spaces of prayer, from the time of the Prophet Mohammed.

“This was a space that was extremely modest, it was made of palm fronds. And it disappeared entirely into the ground … It was a space that was activated by ritual; there was nothing fancy or ornate about the architecture.” Mirroring this, the space will be activated throughout the bienniale with a series of performances, educational sessions and other gatherings.

Meanwhile, Bricklab Studios has produced another architectural installation, Air Pilgrims Accommodation 1958, inspired by Jeddah’s historic Hajj housing — which Vally calls another “huge cultural connector that gathered people from around the world together”. Elsewhere, Lubna Chowdhary from Tanzania and the UK presents The Endless Iftar — a 40-metre-long table that draws on rituals of eating and congregation from around the world.

There are many more artworks, architectural installations and archaeological marvels on show, too. “For so long,” says Vally, “we have been waiting for a space, and an opportunity to define ourselves in our own image, from our perspective and from our voices. And to be able to share that definition of who we are with the world is very special.

“I hope that even non-Muslims who come to see it will feel something resonant with their own communities and spiritual practices, whatever that may be. Because I think that underneath everything, we’re all connected.”