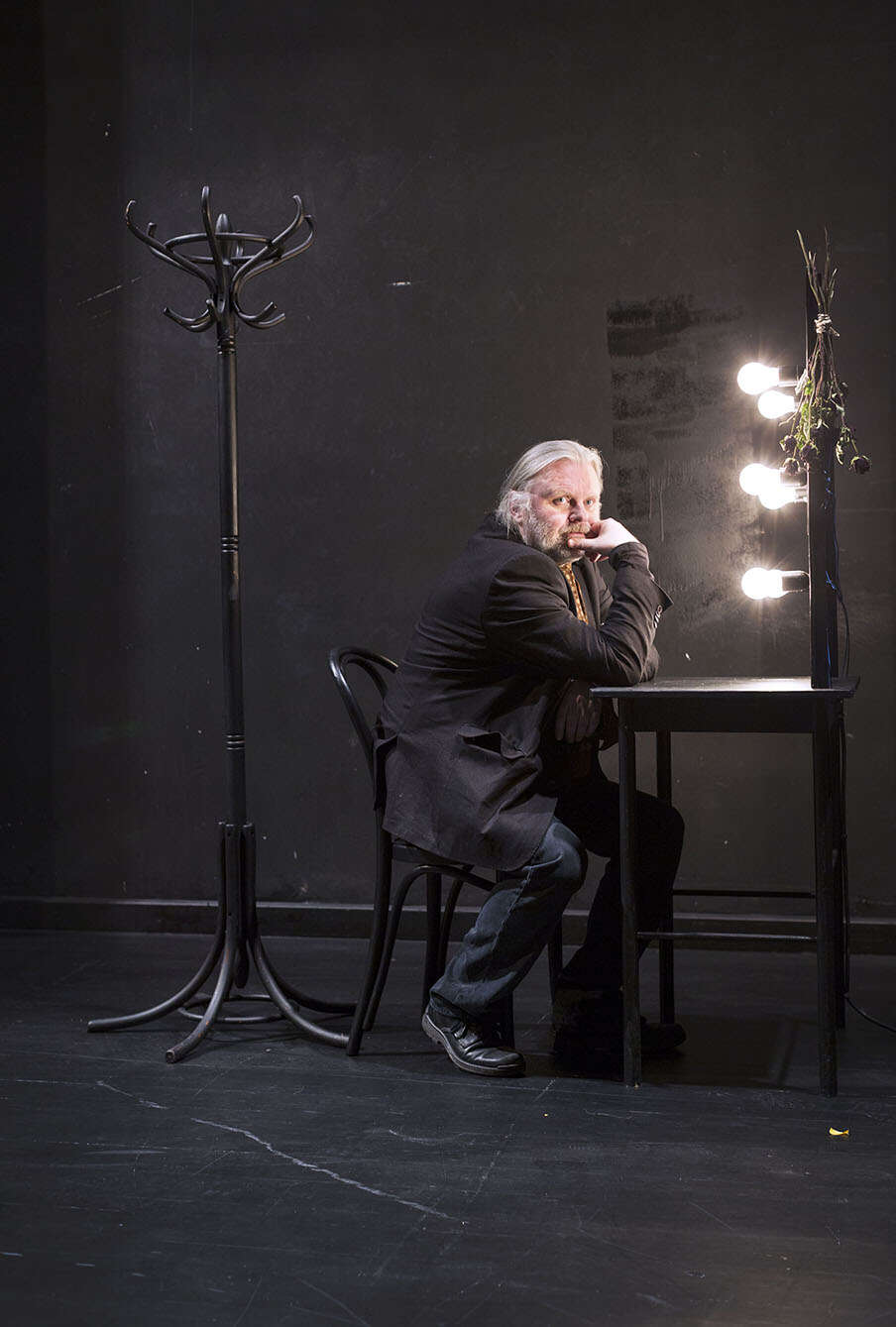 A giant of Norwegian letters and an internationally celebrated dramatist, Jon Fosse, whose body of work spans four decades, has until recently remained little-known in the English-speaking world. But with his latest work, Septology – a seven-part novel published simultaneously in an English translation by Damion Searls, initially in three instalments and this winter brought together in a single, thick volume – Fosse’s renown among Anglophone readers seems on the cusp of being lastingly assured.

The late American philosopher Stanley Cavell once likened “the burden of describing” art to “the burden of producing it”. Cavell elsewhere advised critics to “let the object or work of your interest teach you how to consider it” – that is, allow our response to, say, a novel, to be guided by cues in the text itself. There is no shortage of cues – self-reflexive musings on art – in Septology, whose narrator, Asle, is a gifted abstract painter. Great art, according to Asle, “says something…that can never be said in words”, emitting a “silent language” that can be intuited but not paraphrased or explained. Unique and “not entirely of this world”, it grazes the divine, evoking “something bigger than life”.

Perhaps influenced by such promptings, the burden of describing Septology has weighed heavily on its critics. Several were so spiritually moved by the novel that they were unable or reluctant to articulate the experience, except by invoking stunned analogies. “The act of meditation,” Ruth Margalit wrote in the New York Review of Books, is “the closest I can come to describing” reading Fosse. Wyatt Mason in Harper’s could “only gesture at” what was striking about the book, but “felt…the urge, inexplicably, to pray”. “To describe what Septology is about,” is for Merve Emre, writing in Bookforum, “already to defile it. Perhaps it would be simpler to say that reading it is the closest I have come to feeling the presence of God here on Earth.”

As this reception suggests, Septology is a masterpiece whose power is puzzling. It is easy to make it sound maddeningly tedious even when trying to convey why it is so compelling. Running to more than 800 pages, the novel reads as a transcription of Asle’s consciousness over several days leading up to Christmas, as he goes about his circumscribed, hermetic life in his “good old house” in a tiny coastal village in western Norway, where he lives alone, having been widowed years before. There are few elements in Asle’s world, and little novelty or variety. He is never without his black velvet jacket and brown leather shoulder bag. The handful of other people he encounters tend to be mysterious doubles of each other, or to have near-identical names. Each of the novel’s seven parts begins with Asle studying a recent painting of his – “two long wide lines”, one purple, one brown, that cross in the middle – and ends in prayer. In between, he stares out his window at the sea, reminisces about his childhood, unpacks shopping, tries not to miss his late wife, Ales, contemplates God, remembers he has to feed the dog, fries bacon. His sole visitor – a kind of Beckettian companion – is his cranky long-bearded neighbour, Åsleik, with whom he has the same conversations over and over. Asle’s only outings are to Bjørgvin, the nearest city, where he buys food, delivers his paintings to his gallerist, Beyer, and drops in on an alcoholic artist also named Asle. Asle I’s consciousness sometimes merges with that of Asle II, who spends most of the novel in hospital, after Asle I, a teetotal Catholic, discovers him lying in the snow. All of this is rendered in the present tense and without full stops. The novel’s one long, rolling sentence is shaped only by commas, the occasional question mark and line breaks to indicate dialogue, and propelled by filler words such as “yes”, “I think”, “I see”.

Asle’s narration is a blow-by-blow record of his every looping thought, action, mood, sensation, reminiscence, conversation. Here he is de-icing his car:

There is none of the usual economy of storytelling, where every detail serves some narrative purpose. James Wood observed of Fosse’s former student and fellow Norwegian Karl Ove Knausgård, another completist famed for his stamina for the prosaic, that he “seems not to be selecting or shaping anything, or even pausing to draw breath”. This seems even truer of Fosse, whose radically continuous style, what he calls “slow prose”, can sound as though the narrator is fastidiously transcribing his inner speech – Fosse has described writing as an “act of listening” – or like a child recounting a dream in great detail. (“I don’t think about the reader,” Fosse has written: “If I did that, I would end up feeling sorry for the reader.”)

The prose, moreover, feels artless and unremarkable. Generic adjectives such as “good” – as in “the good smell of the bacon” – and “nice” – as in the bacon is “nice and crispy” – abound, sometimes reinforced by equally bland adverbs: “unbelievably good”, “incredibly good”, “amazingly good”. The narration, a kind of interior monologue, is littered with the lively imperfections found in speech (and usually effaced in writing): backtracking, hedging and approximation.

Yet it is possible to exaggerate the mystery of Septology’s brilliance. Referring to Fosse’s sui generis style, Wyatt Mason claimed that he “has found a new approach to writing fiction”. But Septology contains many of the typical ingredients of a shapely novel. Asle may not lead an exhilarating existence, but he is not, as Mason terms him, a “static protagonist”. As is customary for main characters, he is undergoing a kind of crisis or transformation, however muted, and the days covered by the novel are unusual and eventful by his standards, even unprecedented: he does the several-hour round-trip to Bjørgvin twice in one day on a whim; he acquires a dog – adopted from the hospitalised Asle – having wanted one forever; most momentously, he loses the desire to paint.

Meanwhile, a submerged but conventional Bildungsroman unfolds in the form of Asle’s flashbacks to his youth. And Asle I’s seemingly aimless inner soliloquy is tautened by our uncertainty about the fate of the alcoholic Asle II, languishing with the shakes in hospital. Septology, a feast of naturalistic detail, also delivers the usual pleasures of recognition: the way Asle’s clothes feel cold when he gets dressed; the way a particular frying pan reminds him of Ales and brings tears to his eyes. Above all, the repetitiousness is nothing if not true to life.

Nonetheless, why is this novel’s dogged minimalism so powerful and vivid – not merely pleasantly hypnotic, but radiating a strange significance? Take the dog, Bragi. We are given scant information about him: not about the colour or texture of his fur, his build, breed, temperament. Why does he seem so alive? “The dog starts jumping up and down at my feet and he’s yapping and yapping… I bend down and pick up the dog and… I pet him and pet him and say good boy, good boy, Bragi, good boy Bragi.” Fosse animates Bragi not by describing him with intricacy, but by tracking his behaviour, as though in real time, in clauses that become mimetic. “Yapping” and “petting” signify ongoing actions; their repetition is redundant, but through it Fosse’s prose subtly shifts from describing the scene to reproducing it, from telling to showing. We may not be able to tell you what Bragi looks like but we watch him move.

Fosse has drawn comparison with Beckett, Ibsen, Joyce and Thomas Bernhard, among others, but his use of repetition may owe something to Gertrude Stein. In Stein’s novel The Making of Americans, it’s as though she is coining a vernacular, which she teaches readers using incantatory repetition. Although Septology has none of the exuberant oddness of Stein’s prose, Fosse’s use of repetition is similarly hospitable. In his dark, snowy universe – a hamlet virtually untouched by the wider world – Asle always looks out of his window at his “landmark”, a “fixed spot” in the sea where “I take my bearings”. The novel is strewn with landmarks, not only physical places – The Clinic, The Alehouse – but recurring patches of prose. These become familiar coordinates by which the reader orientates themselves. The text not only evokes a world but itself constitutes one, generating its own Proustian moments: Asle’s ordering bacon at The Coffeehouse reminds you of his frying bacon 150 pages earlier, as though these scenes were part of your own memory.

My favourite cue or model for reading in Septology is driving, when Asle falls into a “peaceful unthinking stupor” and just “listens”: “No thoughts bother me, no sorrows come over me,” “I get a kind of break or rest,” and, “Time just passes.” Fosse regards writing as a “gift”, “grace”: he lets his slow prose “write itself”.

Asle, too, paints the purple and brown lines in his picture “slowly”; where the lines cross “the colours blend beautifully and drip”. Septology may not bring you closer to God, but you’ll want to keep dwelling in the tranquil shelter Fosse has built, gratefully stupefied by the fortuitous beauty of the commingling paint.

Purchasing a book may earn the NS a commission from Bookshop.org, who support independent bookshops