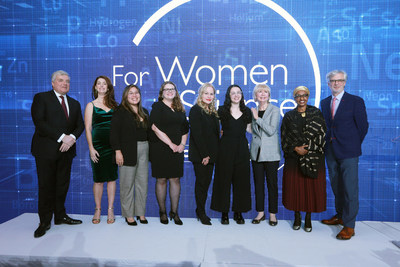 MONTREAL, Nov. 22, 2022 /CNW Telbec/ – At a ceremony held on November 21, 2022 at the French Embassy in Ottawa in the presence of Mr. Michel Miraillet, Ambassador of France to Canada, and Mrs. An Verhulst-Santos, President and CEO of L’Oréal Canada, five promising young Canadian researchers were honoured and rewarded within the framework of the L’Oréal-UNESCO For Women in Science program, with the support of the Canadian Commission for UNESCO.

These five young women have joined the international L’Oréal-UNESCO For Women in Science community of 3900 women scientists, five of whom have won the Nobel Prize.

During the ceremony, the extraordinary contribution of women in science was celebrated among a distinguished audience of scientists, academics, opinion leaders, politicians, public authorities and organizations promoting gender equality and women’s empowerment.

The event, moderated by science journalist Véronique Morin, began with a foreword by Ambassador Michel Miraillet and L’Oréal Canada President and CEO An Verhulst-Santos on the importance of this year’s celebration in reminding the world how essential women scientists and their work are to building a better future.

Since 2003, L’Oréal Canada and the Canadian Commission for UNESCO have been recognizing young female doctoral and post-doctoral researchers and awarding $60,000 CAD in research grants.

The L’Oréal-UNESCO 2022 Research Excellence Fellowships, valued at $20,000 each, are awarded to support major post-doctoral research projects undertaken by young Canadian women at a pivotal point in their careers. They reward excellence and allow the best scientists, selected by a committee of experts, to pursue their research. Roda Muse, Secretary General of the Canadian Commission for UNESCO, was pleased to present them to :

In collaboration with the  France-Canada Research Fund (FCRF), two fellowships of $5,000 each to encourage and develop scientific and academic exchanges between France and Canada, in all fields of knowledge, from basic sciences to humanities and social sciences, were awarded by Ruby Heap, Co-President of FCRF. The L’Oréal Canada France Canada Research Fund 2022 Fellows are

These five Fellows will also be invited to participate in the L’Oréal Canada For Girls in Science mentorship program, in partnership with the UNESCO Schools in Canada and Let’s Talk Science, where they will encourage high school girls’ scientific vocations, shatter myths about science careers, and hopefully inspire others to follow in their footsteps to make the world a better and more inclusive place.

The world is facing unprecedented challenges: climate change, resource scarcity, health hazards and the Covid-19 pandemic are just a selection of the many other growing threats on a global scale. The women honored by the L’Oréal-UNESCO program have already demonstrated how critical their science can be in addressing these challenges.

By celebrating these outstanding women researchers, the L’Oréal Foundation and UNESCO are committed to rewarding and showing their full support for the women scientists whose work is so crucial in these incredibly challenging times. These women are often victims of invisibilization and marginalization, inequality, prejudice and systemic barriers. Their presence in Paris this week was an ideal opportunity to recognize their significant contributions while reminding the world that the gender gap remains.

L’Oréal Canada is a subsidiary of the L’Oréal Group, the world’s leading beauty company, which manages 40 iconic beauty brands. Headquartered in Montreal since its inception in 1958, L’Oréal Canada consists of a head office, a factory and a distribution center and employs more than 1,450 people of 70 different nationalities. Products are available in all distribution channels, including hair salons, department stores, mass merchandisers, drugstores, med-spas, e-commerce and more. L’Oréal Canada’s commitment to growth is driven by sustainable innovation and supported by L’Oréal’s ambition for the future, which demonstrates sustainability throughout the group’s value chain. The subsidiary also actively supports L’Oréal Foundation programs such as L’Oréal-UNESCO For Women in Science and Beauty for a Better Life.

About the Canadian Commission for UNESCO

The Canadian Commission for UNESCO (CCUNESCO) serves as a bridge between Canadians and the vital work of UNESCO—the United Nations Educational, Scientific and Cultural Organization. Through its networks and partners, the Commission promotes UNESCO’s values, priorities and programs in Canada and brings the voices of Canadian experts to the international stage. CCUNESCO operates under the authority of the Canada Council for the Arts.

The Natural Sciences and Engineering Research Council of Canada (NSERC) is Canada’s premier agency for supporting excellence in discovery and innovation. It supports visionary, inquisitive and innovative minds in their pursuit of scientific and technical breakthroughs for the benefit of our country. NSERC works with universities, colleges, companies, governments and not-for-profit organizations to break down barriers, create opportunities and attract new research talent so that Canada’s scientific community can excel. With a commitment to pushing boundaries and limits, NSERC empowers Canadian researchers and engineers to think outside the box.

About the France-Canada Research Fund (FCRF)

The France-Canada Research Fund (FCRF) is a flagship instrument for Franco-Canadian scientific cooperation, created in 2000 by the French Embassy in Canada and a consortium of 16 Canadian universities. During its 22 years of existence, the FCRF has funded over 300 joint research projects. Today, with 21 member universities, it continues to support some 20 new projects each year led by French and Canadian teams collaborating for the first time.