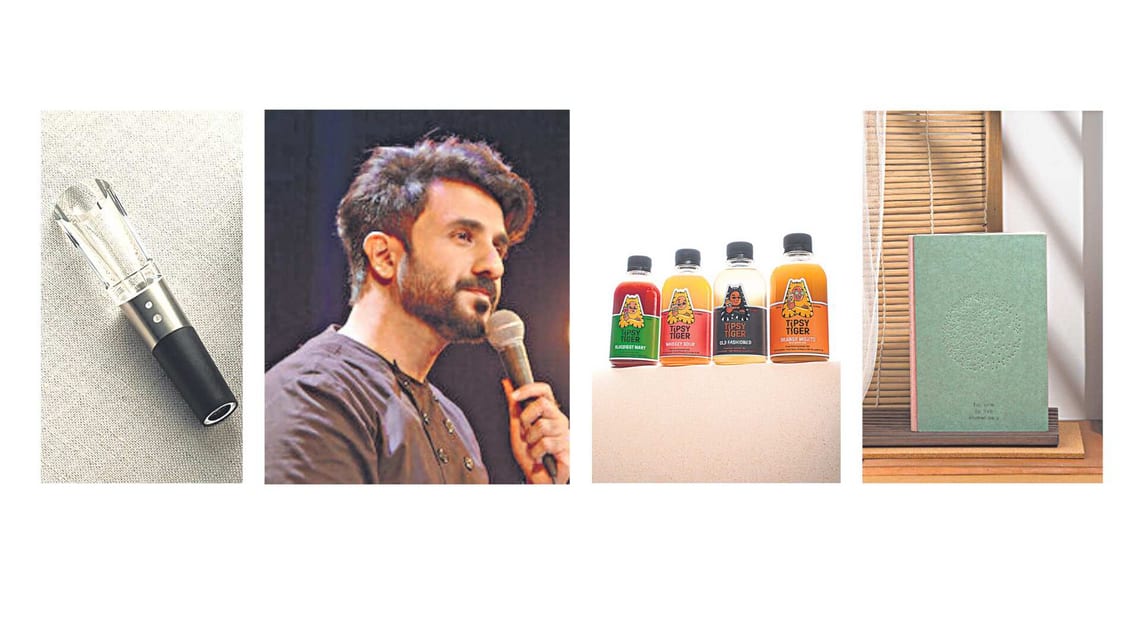 As we step into the new year, here are 4 things to watch, read, hear, do—and other curated experiences from the team

For some, the use of cocktail mixers is blasphemy. But for lazy drinkers, cocktail mixers can be a blessing in a bottle. Prep your ice. Ready the alcohol of your choice and pour in the mixers. That’s it. The cocktail mixers from Punjab-based Tipsy Tiger caught my attention, with an interesting line-up for a variety of alcohol: whiskey, rum, gin and vodka. I tried their whiskey sour premix, which delivered a decent cocktail. They have similar premixes for some of the most loved classics: Bloody Mary, Old Fashioned, Margarita and Orange & Kaffir lime mojito. These premixes come in re-sealable bottles; one bottle (approximately 250ml) can easily make two drinks. Prices start from Rs. 399 (they have packs of three-eight). You can check them out on tispytiger.com and amazon.in. —Nitin Sreedhar

Add flourish to your pour

There are all sorts of opinions out there about aerating wine and neither wine lovers nor experts can seem to agree on one. Today’s new, mass-produced wines are usually filtered enough to prevent sedimentation but there are still a lot of persnickety wine drinkers who believe aerating wine, or exposing it to air before drinking, opens up its flavour and aroma. If you find such drinkers among your guests, you would do well to pop the sleek Rabbit Super Wine Aerator/Pourer on to the bottle after you uncork a red. It’s pretty, easy to use and clean and aerates the wine quickly and efficiently, while adding that touch of drama to your pour. —Shalini Umachandran

How hard can it be to find a minimalistic planner? After all, all I needed was an elegant and functional monthly planner for the New Year. Amazon, however, stocks kitschy, generally poorly designed options. Just as I was beginning to wonder if I would find one, I discovered Paperdom—it’s hard to find it on Google search or Amazon—an Ahmedabad-based stationery brand that makes journals and planners with cotton and banana fibre. They are like hardbound handmade books with pages organised in separate sections for to-do lists, tracking health goals and noting personal reflections. Get one—and gift one. —Jahnabee Borah

In his new comedy special Vir Das: Landing, Das not only addresses the elephant in the room—his viral, poetic rendition of “Two Indias”—but also talks about cancel culture, opinionated NRI uncles, algebra, and more. He moves seamlessly from one topic to another, from joking about royalty to talking about the Mumbai monsoon, ensuring a steady supply of laughter. The highlight of the show, however, is when he talks about the backlash he faced earlier this year. The humour fizzles out but there is no sense of bitterness. The agony and the sentiments come across as he moves into flashback, sharing his experience of dealing with hatred and uncertainty. He changes gear soon, though, throwing in a few quips on life and human nature. Vir Das: Landing is streaming now on Netflix.  —Debasree Purkayastha