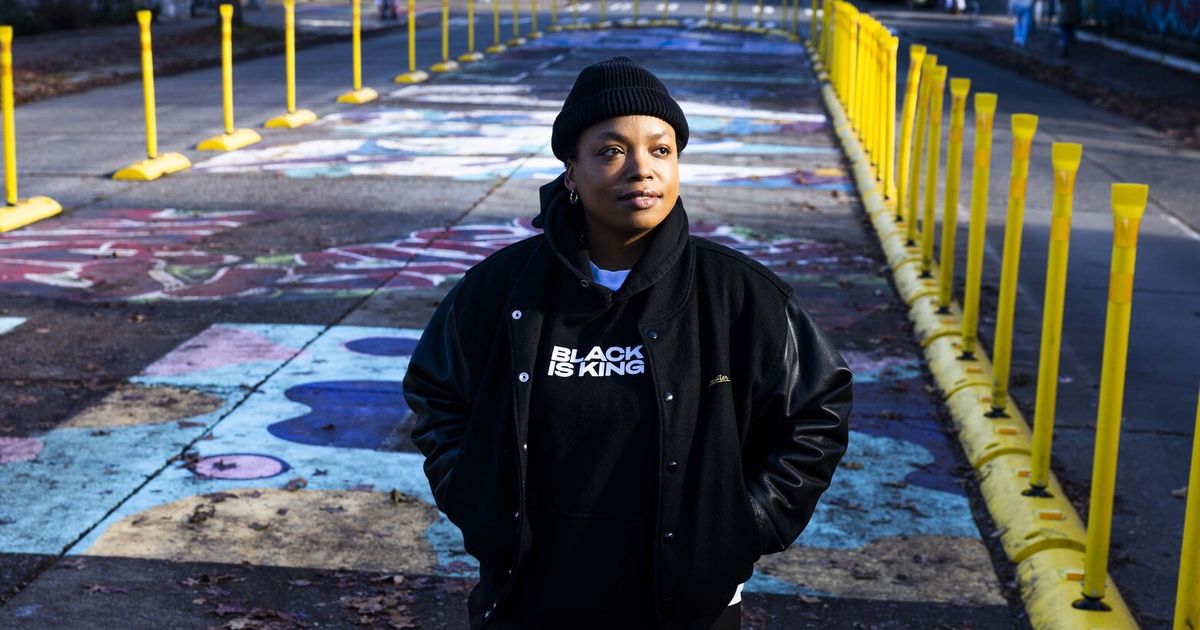 Takiyah Ward, one of the Seattle artists who created the massive Black Lives Matter mural on Capitol Hill in the wake of George Floyd’s murder in 2020, believes the Rev. Dr. Martin Luther King Jr. would support artists spotlighting racial inequality through art.

“I would imagine he would champion the movement and champion the message of people fighting and acting from where they are,” said Ward, a member of the Vivid Matter Collective, which spearheaded the painting of the Pine Street mural and aims to “spread truth through art.”

“Being an artist, I had to act from the biggest and strongest way that I could,” Ward said. “And that’s why the mural happened.”

Though the civil rights champion visited Seattle just once before his assassination, King left an outsized impact on King County that reverberates today, as reflected by Seattle’s Black artists, leaders and residents, like Ward, who are honoring King’s legacy through a vibrant arts and cultural scene.

King’s time in Seattle was short, but his physical presence lives on here — in the name of King County, on MLK Way in the Central District and in the Mount Baker park that bears his name. Now, on what would have been King’s 94th birthday, community leaders strive to uplift King’s message of peace, unity and racial justice. That message of Black empowerment was often met with hesitation and hostility in King’s lifetime and today, in Seattle and beyond.

“His words have been with me my entire life”

As a student at Martin Luther King, Jr. Elementary School in Seattle, Ward recalls reciting lines from King’s famous 1963 “I Have a Dream” speech at a school assembly.

“I remember my part of it was ‘not to be judged by the color of their skin, but by the content of their character,’” Ward said. “His words have been with me my entire life.”

Today, Ward uses this message to inspire change in the community with her art.

“You have to call out injustice when we see it,” Ward said. “Not just when the protest is happening, but every day.”

For many, the fight for Black art, culture and civil rights are deeply interconnected.

In recent years, the Central District — an area historically populated by Seattle’s Black communities — has seen a decline in its Black population, from nearly 75% in 1970 to under 20%, per a 2020 Seattle Times analysis, which attributed the decline to ongoing gentrification and a rapidly increasing cost of living in the city. Despite these challenges, Black arts and culture remain a fixture in the neighborhood.

Sharon Nyree Williams is the executive director of the Central District Forum for Arts & Ideas, aka the CD Forum, an organization that creates arts and community programming. She believes King would have wanted Black artists, culture and ideas to thrive.

“I think he would be proud and tell us to keep finding ways to be better,” Williams said. “We saw gentrification tear us down, but we are at a point of building ourselves back up.”

Arte Noir, the Central District’s Black arts and culture store and gallery, aims to invoke King’s memory through love — a mission the nonprofit’s leaders said is reflected in how Arte Noir reclaims space for the Black community.

“Arte Noir is a place of love,” said Executive Director Jazmyn Scott and founder and board president Vivian Phillips in an email. “We do not forget that displacement and gentrification are both relatives of segregation, and cousins to Jim Crow, and enslavement.

“We fight daily, with love, to maintain a place of integrity, joy, and belonging. We are the dream.”

Williams pledged to carry on King’s work by using art as a tool for change.

“There’s no giving up,” Williams said. “We owe it to ourselves; we owe it to those before us and those after us to leave a legacy of our own.”

While King’s ideas are now celebrated, they were controversial at the time — and his message of Black empowerment is still met with resistance today.

King visited Seattle in November 1961 after his Morehouse College classmate Rev. Samuel B. McKinney, a fellow civil rights leader, arranged for him to speak at First Presbyterian Church, but the church canceled the event weeks before King arrived. The church has since apologized.

“A variety of people have seized on King’s visit to Seattle to try to open up a space to talk about race in the Pacific Northwest,” said historian Trevor Griffey, a co-founder of the University of Washington’s Seattle Civil Rights & Labor History Project who now teaches at the University of California, Los Angeles. “King, though celebrated after the fact, was somebody that many people opposed during his lifetime — including people in Seattle.”

“He was not just a Southern civil rights leader but a national one,” Griffey said. “The issues that he was talking about were national, which means it implicated the Pacific Northwest.”

In fact, some of King’s iconic “I Have a Dream” address was workshopped during a speech to Garfield High School students and teachers in 1961, during King’s one Seattle visit. Carver C. Gayton, a former history and language arts teacher at the school, recalls being “riveted” by the address — and said King did not glance once at his notes.

McKinney invited Gayton, one of the few Black teachers in Seattle at the time, to meet King backstage. The young teacher was mesmerized by King’s presence, but also noticed his apprehension. Gayton, now 84 and a decorated author, historian and former director of the Northwest African American Museum, was aware of the violence facing King and his message of nonviolent protest. And he could understand King’s reservations.

“Why would he feel a little bit uneasy?” Gayton recalled. “And I stopped and said, ‘Gosh, three years earlier he was stabbed in New York, people were threatening him.”

Seven years after visiting Seattle, King was assassinated in Memphis, Tennessee, at 39 years old. His death on April 4, 1968, sparked a national call to create a public holiday marking his memory. After decades of advocacy, King’s birthday was designated a federal holiday in 1983. That year, Seattle’s Empire Way was changed to Martin Luther King Jr. Way.

“It took a grassroots movement across the country to make Martin Luther King holiday,” Griffey said. “It was not passed overnight, there was significant resistance to it. … So, the renaming of Empire Way contributed to this building up of a public memory of King.”

Amid forces like gentrification that displace Black people, Griffey says these efforts signify a much larger push.

“What does it mean to invoke [King’s] memory and his visit?” Griffey asked. “In some ways it’s marking Black space.”