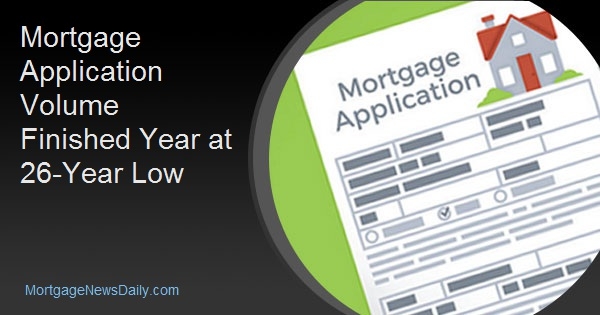 The end-of-year holiday season took its usual toll on mortgage applications. The Mortgage Brokers Association (MBA) report this morning recapped the past two weeks of activity (the MBA was closed during Christmas Week) during which its Market Composite Index, a measure of mortgage application volume, decreased 13.2 percent on a seasonally adjusted basis.  On an unadjusted basis, the Index fell 39.4 percent over the period that ended on December 30.

The holiday-adjusted Refinance Index decreased 16.3 percent from two weeks earlier and was 87 percent lower than the same week one year ago. Refinancing accounted for 30.3 percent of application activity over the period compared to 31.1 percent in the previous report.

The seasonally adjusted Purchase Index fell 12.2 percent compared to the week ended December 16 and was down 38.5 percent on an unadjusted basis. Purchase applications were 42 percent lower than during the holiday period in 2021.

Joel Kan, MBA’s Vice President and Deputy Chief Economist said, “The end of the year is typically a slower time for the housing market, and with mortgage rates still well above 6 percent and the threat of a recession looming, mortgage applications continued to decline over the past two weeks to the lowest level since 1996. Purchase applications have been impacted by slowing home sales in both the new and existing segments of the market. Even as home-price growth slows in many parts of the country, elevated mortgage rates continue to put a strain on affordability and are keeping prospective homebuyers out of the market.”

Kan added, “Refinance applications remain less than a third of the market and were 87 percent lower than a year ago as rates remained close to double what they were in 2021. Mortgage rates are lower than October 2022 highs but would have to decline substantially to generate additional refinance activity.”

While changes in application volume and loan sizes are computed compared to the week ended December 16, the following highlights from MBA’s Weekly Mortgage Application Survey are presented relative to the previous week.