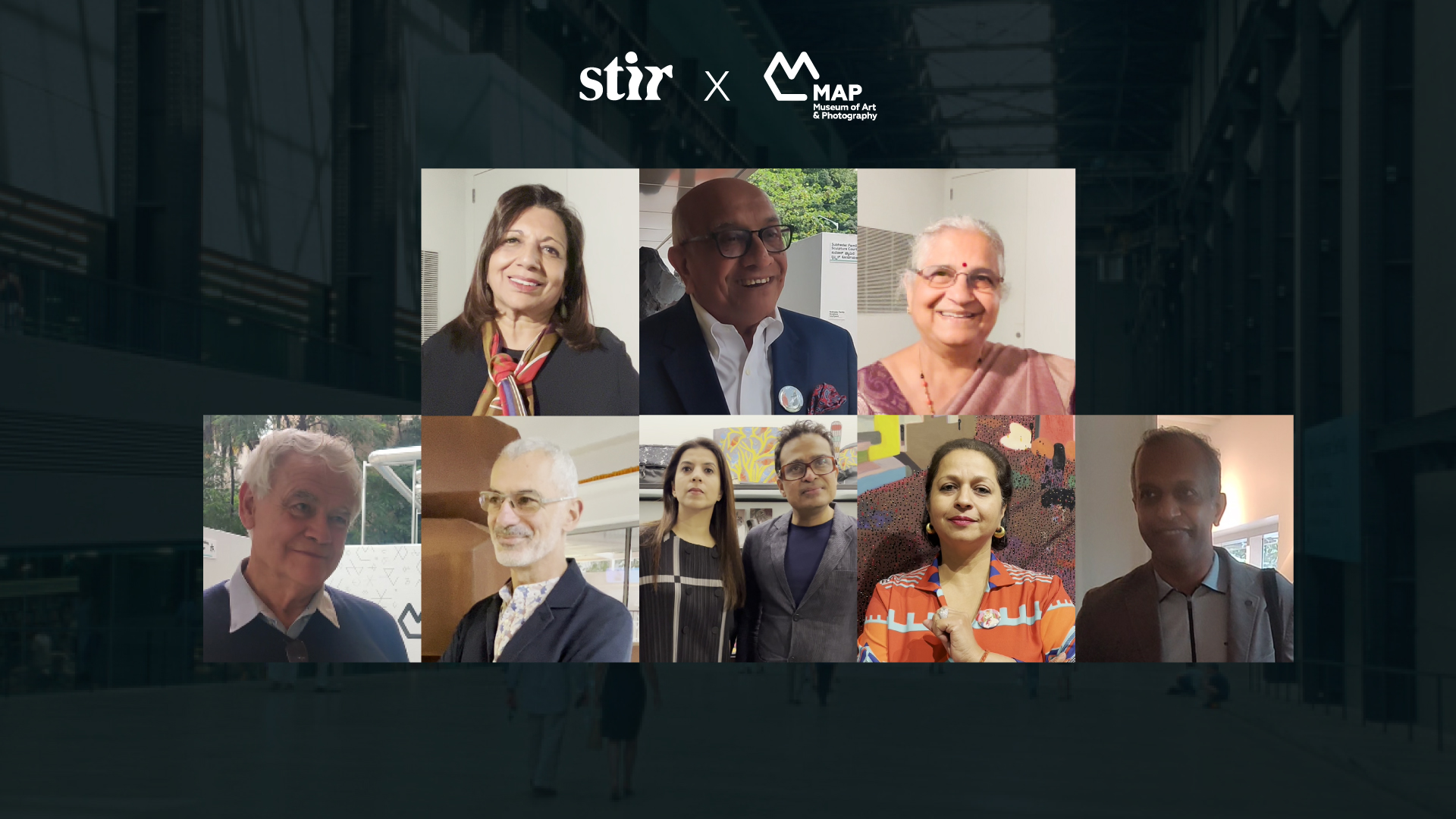 How can stories about art parley with findings from the world of science? Can culture, art, science, and technology help forge new narratives? A collection of Indian art, textiles, photographs, crafts, and design items dating back to the 12th century, and those that can be attributed to the present times, adorn the walls of Museum of Art and Photography (MAP), a digital-age museum in Bengaluru, India. With a focus on digital storytelling and innovation, it was first introduced online to the public during the pandemic and is scheduled to open its physical doors to the public in February 2023. Founded by art patron and collector Abhishek Poddar, MAP will be housed in a landmark 44,000 square-foot building, located in the heart of Bengaluru’s museum quarter and is designed by Bangalore-based architects, Mathew & Ghosh. To commemorate its commencement, MAP held a private preview, attended by STIR, to obtain first-hand access to the collection.

Speaking on MAP’s contribution to the art culture of the country, Kiran Mazumdar-Shaw, Executive Chairperson and Founder, Biocon and MAP’s board member, shared, “MAP has looked at its endeavour to connect art to all communities. The project is to democratise art and we really want people to understand the rich heritage and artistic culture of India.” On the other hand, Sudha Murthy, educator, author, and entrepreneur, enunciating on the importance of museums, said, “Museums help us understand our culture, your artefacts and why art was made. Every museum is different and each of them is a great school, a box of knowledge.” Elaborating further on the intersection of art and science, Priya Paul, Chairperson, Apeejay Surrendra Park Hotels, shared, “Science and technology are definitely part of art and part of making the process. If you are a ceramic artist, you are completely at the edge of science and it is science, that helps you understand and perfect your craft. Art, science and technology are entwined in many more ways than people think they are. We should think about how we can be closer in the future.”

STIR also engaged in a candid conversation with important creatives such as Arik Levy, LN Tallur, Reena Kallat, Jitish Kallat and sculptor Stephen Cox about the relevancy of art museums in contemporary times, and the need for democratisation in the vision and collections of a museum. “At some level, a museum is a kind of civic corridor that the city can pass through and interface with time in a different way-time in the form of artefacts and time in the form of history. It’s a collective space for learning in its best forms,” Jitish said. Inclusivity is another aspect that seems important in the context of museums of the future. “There was a time where art was in every home, but over time it tended to become elitist,” shared Som Mittal, President, MAP Board.

MAP intends to define itself as a space for connection, conversations, and celebration. For the inaugral event, MAP commissioned visual artists and sculptors for permanent installations, establishing a new era in Indian art history. The first day of the preview weekend began with a unique technology-based lighting of a lamp and a ceremonial dance. This was followed by a series of exhibitions, talks, and informal interactions throughout the weekend.

Significant exhibitions included Tallur’s solo exhibition titled The Swarm; highlights from the MAP Collection and Holographic Experiences; an exploration of the museum’s conservation process; browsing through the museum’s books and more. Visitors explored Chirag-e-AI, Time & Time Again, and Dialogues in Stone where artist Stephen Cox gave a walkthrough of his works. Along with that, Amit Dutta’s show, Mother, Who Will Weave Now, added a surreal experience to the roster. Abhishek Poddar and Kamini Sawhney, in conversation with Ingrid Srinath, contributed to the event ‘Making of MAP’. Conversations with Arik Levy, sculptor Tarik Currimbhoy, and art historian Amy Herman further enhanced the event.

On day two of the MAP preview weekend, a panel discussion titled New Spaces, New Visions: Alternate Approaches to Art Engagement that included Anshika Varma, Avni Sethi, Chinar Shah, and was moderated by Arundhati Ghosh. The conversations set the context on why we talk about ‘New Spaces and New Visions’ from the point of view of limitations and holes in our current experience of spaces and arts engagement. Additionally, three different initiatives were discussed—a physical space that attempts to understand conflict through artistic and cultural engagements; a travelling space that explores ways to receive and witness the world through visuals; and the idea of exhibitions held inside domestic lived-in spaces moving away from white cubes.

The speakers responded to some pertinent questions, related to the art vertical in India, which was followed by a discussion on the kind of audiences being engaged through museums—people who traditionally don’t engage with arts, and the topic of inclusivity. The discussion gave resolution to the idea of new spaces, offering new visions and perspectives while addressing the gaps that face the arts and culture sector.

A set of panellists addressed technology as an imperative aspect of arts, considering the new virtual worlds, fresh digital currencies, cutting-edge robots, digital humans, and 6G, as well as how technology benefits art, museums, and their visitors. Art and the Digital Revolution panel – moderated by Chris Michaels, Digital Director, The National Gallery, UK – included Ajit Mohan, President of APAC, Snap; Anant Maheshwari, President, Microsoft India; and Sanjay Gupta, Country Head & VP, Google India. The speakers shed a light on how digitalisation is changing the art world—how art gets made, shared, sold, and how audiences understand art, along with museums and galleries. There was also an avid discussion on the role MAP can play as a digital-age museum, catalysing the relationship between India’s art and technology sectors.

What’s NEXT in store for MAP? With the museum facilitating inceptive conversations around art, culture, technology, and digital cultures, and blending them all together, one can reckon that the museum will take even more enthusiastic initiatives in these areas in the coming months and years in an effort to establish democratic art cultures.

Read exclusive interviews moderated by STIR prior to and during the inaugural weekend to celebrate the opening of the Museum of Art and Photography. Prior to the opening STIR spoke with Abhishek Poddar, founder, and Kamini Sawhney, director of Museum of Art & Photography, to better understand what one can expect from the museum. Capturing the spirit of the opening, Manuel Rabate, Maria Balshaw, and Soumitro Ghosh contemplate the role of museums, while in another panel discussion, Abhishek Poddar & Arik Levy discuss the sculptural commissions at the museum.

STIR was a media partner for the launch event of the Museum of Art and Photography (MAP).