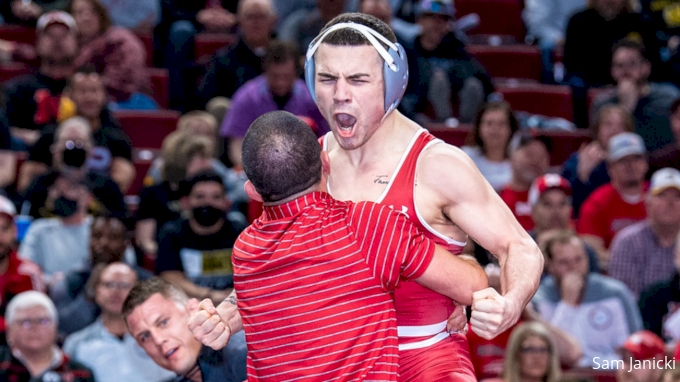 It’s not quite at the point where dogs and cats are living together or where our pets’ heads are falling off, but these first three weeks of the season have been pandemonium for the top of the 149-pound rankings.

We have a lot of wrestling results to cover please allow me to make like Taylor Swift and blame Ticketmaster for any technical difficulties anyone experienced last week so that I may stick to sports. Thank you.

Carl’s Stone Cold Dual Of The Century Of The Week: Wisconsin at Cornell

New week, new top-tier 149-pound wrestler taking a loss. This time it was Austin Gomez beating #1 Yianni Diakomihalis. This is only the second loss in Yianni’s collegiate career. The three-time national champion had been on a 75-match winning streak.

This one week after Sammy Sasso lost to Calbe Henson and two weeks after [Paniro Johnson] upset Austin Gomez. And so the upper echelon of the weight class comes full circle in less than a month.

*Jim Helpern ‘what is going on? gif’*

Thankfully, figuring out how to rank 149 is no longer my responsibility, and I wish my colleagues JD Rader and Jon Kozak good luck and fortune as they tackle that conundrum. All complaints if you disagree with their decisions should be directed to the guilty parties (Jon and JD), however, I will still be available to receive compliments if you do agree.

But there were plenty of other noteworthy results from that dual. Vito Arujau made his season debut for Cornell, beating All-American Taylor LaMont at 133. Freshman U20 world fifth-placer Vince Cornella beat #12 Joey Zargo. The Cornella the Cornellian will likely be in the rankings by Tuesday morning.

Truly a dual worthy of Carl from ATHF’s approval.

The Co-Dual Of The Week: Missouri at Arizona State

A top 20 wrestler in every match. 4 top 20 matchups and two top 10 matchups! Now that’s what I call a high-quality dual meet!

Richie Figueroa of Arizona State beat Missouri’s #14 Noah Surtin and Jesse Vasquez defeated #6 Allan Hart to turn the tide for the Sun Devils. Vasquez in particular impressed as the third year wrestler from California had barely more than a dozen varsity matches in his career at that point, while Hart is a three-time NCAA qualifier with over 60 D1 wins to his name.

NO. 24 @jessevasquezz UPSETS NO. 6!!!! THREE IN A ROW TO START FOR THE SUN DEVILS!!! pic.twitter.com/yTdqognt5O

Famous rivals TArmy and Navy both held tournaments this weekend, the Black Knight Invite and the Navy Classic.

Penn State was amongst the ten D1 teams that made their way to West Point for the Army-hosted Invite. Nebraska and Michigan State were amongst the even dozen D1 programs in Annapolis for Navy’s Classic.

Penn State had 5 champs at the Black Knight Invite, and their Big Ten rival Nebraska won the same number of titles at the Navy Classic in Annapolis. Michigan State finished in second and the hosts in third.

The Most Classic Of All The Keystones

Five champs was the theme of the weekend at the big tournament, as Virginia Tech marched up the Shenandoah Valley and hung a right at the Mason-Dixon line to crash the Philly Wrestling party at the Palestra.

The Hokies needed all those points from their titlists as they just barely out-placed the hosts, the Pennsylvania Quakers.

Adding to the chaos at 149 was Penn’s Doug Zapf who beat Caleb Henson in the semis. Henson beat Sammy Sasso last week. Zapf was then stopped int he finals by Jon Jon Millner of Appalachian State. Milner lost to Sasso at the 2022 NCAA tournament, so go figure.

The hosts didn’t get shut out though, as Anthony Artalona won a dogfight in the 157 finals over Peter Pappas of George Mason.

Arms Were Bared At The Albany Armory

Iowa completed their road trip to ‘Banach Country’ (ie New York) with two duals at the Journeymen Wrestling Armbar at the Armory in Albany a day after wrestling Army in West Point. Iowa now has dominion over the Hudson by dint of their three victories.

The venue was also very old and dripping with character. It had a Flint Tropics from Semi-Pro vibe. Especially because a minor league basketball team, the Albany Patroons, have been playing there since the 1980s.

Even though I am never surprised by any result and expect everything that happens in college wrestling, there are results that, when judged by the consensus of the wrestling community (of which I myself am a pillar), there are results that would, by definition, be considered surprising, without the slightest shred of disrespect implied for either wrestler.

174: Lennox Wolak of Columbia over #6 Ethan Smith of Ohio State. Ethan Smith is a four-time NCAA qualifier who placed fifth in 2021. He finished in the bloodround last year. Wolak is in his fourth year out of high school and started as a freshman for Columbia in 2020 but his best previous win to date was maybe Brad Laughlin or Daniel Manibog? Many were surprised by this result but I always knew Wolak was capable of the win, while also respecting what Smith has accomplished and acknowledging him as the favorite going into the match.

133: Connor McGonagle of Lehigh over #8 Mickey Phillippi of Pitt. Phillippi is a four-time NCAA qualifier and three-time bloodrounder. He once beat Daton Fix. Some folks were shocked by McGonagle’s victory, as he has never won the EIWAs and went 0-4 on two trips to the NCAAs. Naturally, I knew it was definitely not impossible, though perhaps unlikely.

157: Corbyn Munson of Central Michigan over #7 Ed Scott of NC State. Munson is no slouch, as he qualified for NCAAs last season and finished with 26 victories. But the win was a surprise to many because Ed Scott had a better record against a tougher schedule. But not to me!

141: #19 Cael Happel (Northern Iowa) DEC #5 Clay Carlson (South Dakota State), 8-6. Frankly, anyone who even briefly considered this result surprising is a disappointment (with all due respect to Carlson).

Thanks to a pin at 125 and a match-clinching win at 285, Maryland defeated Pitt in the Panther’s home gym for their first dual win over a ranked opponent since 2013.

For the first time since 2013, the Terps defeat a ranked opponent with an 18-16 win over No. 17 Pitt!#NCAAWrestling x 🎥 @TerpsWrestling pic.twitter.com/tZQmp5DuCi

Sacred Heart fears no team, as evidenced by their schedule, which, credit to head coach John Clark, nearly always features multiple contests against the highest-ranked programs in the nation. Two wins over Iowa in their dual is nothing to sneeze at! Congrats to Mike Manta and Nick Palumbo on the dubs, and cheers to SHU, a New England school of a mere 5,500 undergrads.

Of course, there are this week’s trusty box scores, painstakingly assembled by the nimble fingers of your humble blogger.

But it is also the eve of the NWCA All-Star Classic! We’ve made more content about this event then you have hours left before the matches start, but here are a few pieces of content to wet your All-Star whistle.

And I will be live-blogging the event, because that is my profession, my calling, my telos. See you then!