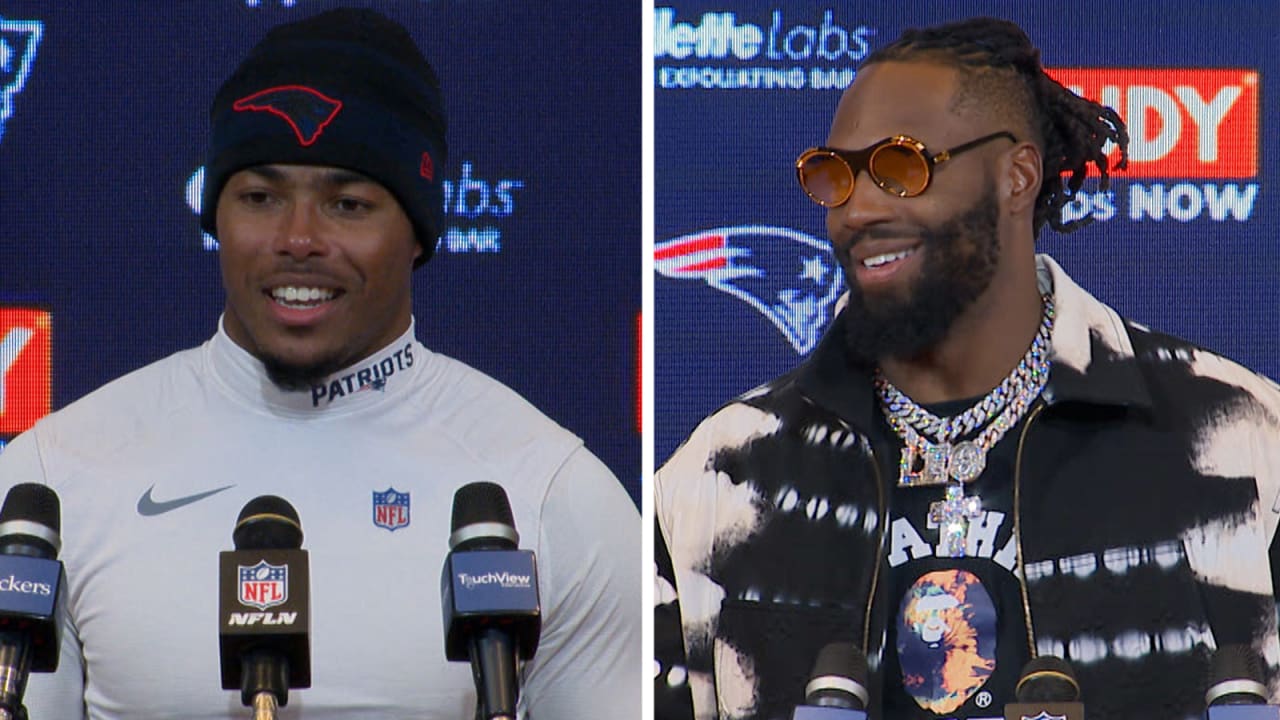 BB: Well, great team win for us today. The Jets are tough, like they always are. We knew it was going to – expected this kind of a game. They’re the best fourth quarter team in football. We knew it was going to be a battle there all the way to the end. Great ending there with the punt return. We came close on a couple of punt rushes, blocked a punt last week, so a combination of rushing and returning is a good weapon to have. Obviously a big day for us defensively, 100 yards total offense. That’s a great job by the staff, the players and all the units that played, running game, passing game, pass rush, coverage, third down. We played well on defense, as did the Jets. We moved the ball. We had 300 yards of offense but only three points. So did a poor job of finishing our drives, getting the ball in good field position into scoring range or getting the ball in the red area into the end zone. We’ve got to find a way to do that better, but it’s good to do it from a win. Quick turnaround here, get ready for Minnesota, and get ready to go out there and go on Thursday night.

Q: Bill, can you teach a player to become a good punt returner, or do they have to have a certain instinct, and is Marcus Jones possibly one of those players with that kind of an instinct?

BB: Yeah, Marcus is really quick. I think Troy Brown has done a great job with him. Where Marcus was when he got here and where he is now are – they’re an ocean apart. Troy has really done a good job with the ball handling, ball catching, making the first guy miss, ball security, setting up blocks, having vision on the ball, the gunner, playing the wind, so forth. Marcus – we didn’t feel like he was quite ready at the beginning of the year. We went with Myles [Bryant]. Then as Marcus got better and gained more experience and confidence and then performed well, then he’s handled all the return game for a number of weeks now. Yeah, certainly there’s some innate skill that goes with that. There’s certainly a developmental aspect. We saw [Julian] Edelman who never returned punts, lead the league in punt returns and be a great punt returner here. Compared to a guy like Troy Brown who came in as a very good returner and continued to be as good as anybody we’ve ever had. But yeah, Troy has done a tremendous job with Marcus. Marcus has worked hard and he’s really improved. He’s had a number of big returns for us, but obviously today going to the house, might have been the first one in the league this year, I don’t know. Obviously a huge play in the game, and great execution by the punt return team to get Marcus started and then handle [Justin] Hardee, who’s a good coverage player, Hardee, [Brandin] Echols and [Ashtyn] Davis. Those three guys make a lot of tackles for the Jets. If you can get them blocked, get it started, then you at least have a chance. Then he did the rest. Well he didn’t – there were some other good blocks in there, too, but it was good. But our combination of rushes and returns, we try to keep the pressure on their punt team, and it paid off for us today.

Q: Mac completed, I think 85 percent of his passes or so, but obviously like you mentioned the offense struggled with points. How do you evaluate his performance between those two and obviously many other factors?

BB: Yeah, we’ll take a look at the film here and see, but we moved the ball. We had some good plays but not enough and not enough consistency, and we weren’t able to get the ball in the end zone or get the ball close enough often enough for what our opportunities were. Had too many negative plays, holding penalties, sacks, and that was a combination of things. We’ve got to do a better job.

Q: I know it’s probably not the best time for story time, but just a game like that we don’t see too often with no offensive touchdowns where a special teams touchdown breaks it at the end. Can you recall a game in your experience where it ended like that in the final minute where offense wasn’t happening?

BB: Nope, not off the top of my head. But my memory is not that good. So we could probably find one, but yeah.

Q: You mentioned that Marcus Jones got off to a bit of a slow start, what did you see in him at Houston and in the pre-draft process that compelled you to draft him?

BB: He was a good player at Houston.

Q: What specific qualities did you see?

BB: He’s fast. He’s quick. He returned punts and kickoffs down there. He also played some offense. He was converted to receiver. He was an explosive playmaker that ended up moving to defense, played inside, played outside and returned kicks. He did all those in college. He’s a good player.

Q: Prior to the punt return for the touchdown, Kyle Dugger came up with a big play there on third down. His game was pretty good today.

BB: Yeah, again, I thought we played good team defense. I’ll have to look at the film and see how each guy did and all that, but Kyle [Dugger] had a number of good plays that I noticed, tackles, coverage plays, but there were also some plays where he was able to do his job and help out on somebody else at the same time and just be a physical presence and a factor in there. Also gave us some plays in the kicking game. It’s good to have Kyle back. We didn’t have him in the first game against the Jets, but it’s always good to have any of your good players back there, and certainly having Kyle back was great.

Q: You guys got into the stadium after the last practice of the week that we had a chance to attend as media, I think on Friday, and I know the conditions today were not exactly the same, but how helpful was that to be in the stadium, particularly when you look at somebody like Marcus Jones who’s got to handle the ball in conditions like he did today?

BB: Right. Yeah, well, it was the Marcus [Jones] play, it was Jonnu [Smith] on the squib kick, just in general the balls went to their boundary or their sideline, the Jets’ sideline and that’s the way we practiced on Friday. The wind was stronger today than it was on Friday, but we had the general idea on Friday about the way the ball was going to go and how we would call certain returns based on whatever the situation was, the distance, the field position and the wind and so forth. It kind of did play out. It’s not always like that sometimes. The conditions changed from Friday to Sunday and the wind changes direction or velocity or whatever, which it did, the velocity changed today. I’d say the tough thing today was just the gusting. When Nick [Folk] went out there for his field goal it was pretty still, and then when he kicked it, it was really gusting up and it hit the cross-bar and didn’t make it, but that ball probably was affected by, I don’t know, five, six, eight yards, whatever it was, just on that. It was a good kick, really close, but just a little bit of a difference there kicking into that open end. That was definitely a factor. But yeah, it was good to get in there, good to get the specialists to kick and good to get the returners – not just the returners but the guys blocking to anticipate the direction of the ball and how the return was going to be set up based on where the wind was going to carry it.

Q: Trent Brown had started every game for you guys this year at left tackle and wasn’t on the injury report this week. What went into the decision to sit him until Isaiah Wynn got hurt?

BB: Yeah, it was a coaching decision.

Q: Question about your punting unit. This time you have a new punter and with this kind of a weather condition, is there any particular adjustment you have to make, especially shifting from Jake Bailey to Mike Palardy, from a righty to lefty?

BB: Yeah, sure, anytime you change a position like that, there are some adjustments in the punting game, righty to lefty, and just overall timing certainly for a snapper like Joe [Cardona] or you try to put the ball on the right hip for a right-footed punter and left hit for a left-footed punter, so it’s a little bit of an adjustment there, but then also Michael [Palardy] did the holding on the field goals for Jake and then Nick did the kickoffs for Jake. There were multiple adjustments with Jake not available today that both Nick and Michael had to make, and in addition Joe Cardona. The rest of it’s everybody else kind of – their blocking assignments and coverage responsibilities and all that are pretty much the same. But certainly the direction of the kick, the hangtime of the kick and the way the ball is kicked, Nick’s kickoffs versus Jake’s kickoffs, there were definitely some differences there that we had to adjust to, but that’s what you have to do. You always want to play to the strength of your specialists. We tried to play into that.

Q: Do you feel like your offense and Mac Jones are close to a breakthrough of cleaning up those mistakes and getting the points you want or are you concerned that from this point on it’s going to be a slog and a fight for this offense?

BB: Yeah, well, again, we moved the ball. We just didn’t have enough points. So we’ve got to do a better job of scoring more points when we get down there, and when we get close to scoring points, 30, 35-yard line, get the ball closer to get some points on the board. It wasn’t like we couldn’t move the ball. We had several good opportunities, but we just – penalties, negative plays, dropped the ball, missed opportunities. Just have to do a better job there. And again, give the Jets credit. Coach Saleh and his staff and their players, they have a really good defense. We all know that. But we’re going to see good defenses for the rest of the year, as well, so we’ve just got to coach and play better.