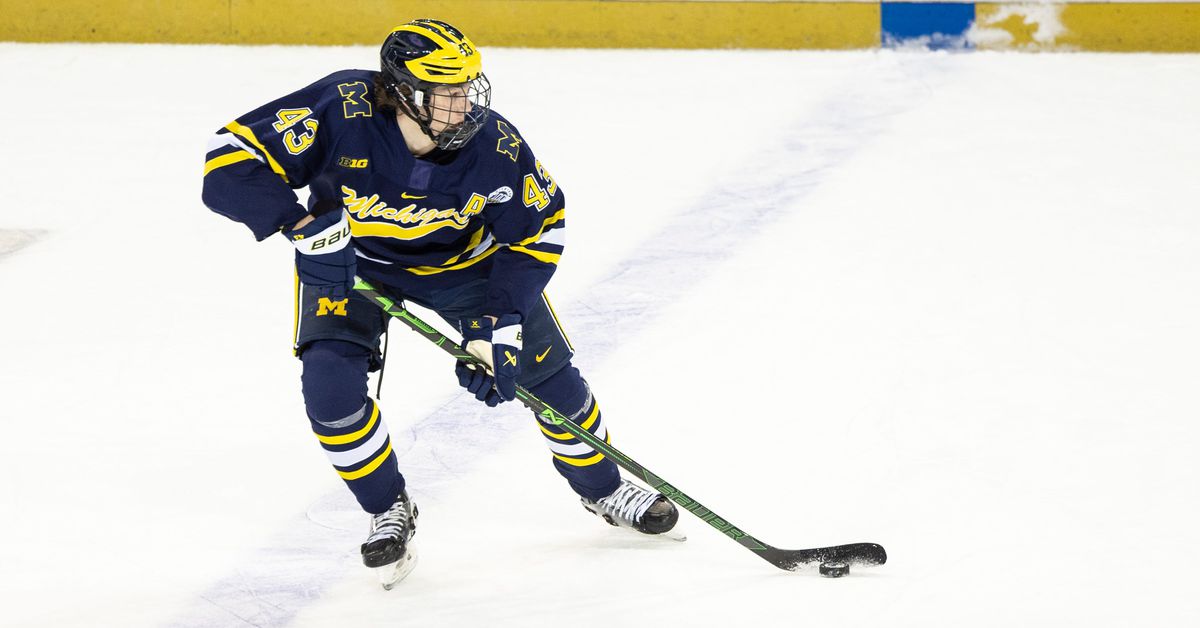 So what has been causing Luke Hughes to rise up various prospect lists? Let’s take a look at some comparisons. The below chart ranks Hughes alongside former NCAA defenders by points per game in their freshman and sophomore seasons:

A few thoughts immediately pop out:

All the more impressive is that Luke Hughes is a late birthday giving him a considerable age disadvantage compared to others on the chart. As an example, Cale Makar, an October birthday, was already 19 near the start of his freshman campaign in 2017 and played his sophomore season at the age of 20. By comparison, Hughes played his entire freshman season as an 18 year-old and only turned 19 two months ago. So, Hughes thus far has a better points per game average than Cale Makar while being a year younger than Makar was at the time he was playing in the NCAA.

A CONCLUSION OF SORTS

Whether Luke Hughes finishes at the top, middle or bottom of an NHL list of these players when all these careers are said and done remains to be seen. Cale Makar is a Norris winner and one of, if not the best, defenseman currently playing in the NHL. It is far too early to know whether Luke Hughes in his prime will come anywhere near that elite level. NCAA production does not always translate to future NHL production.

That said, the first two (and likely only) NCAA seasons for Luke Hughes compare extremely well to Makar and other top NHL defensemen. The fact that Hughes is doing it a year behind most of the others is all the more impressive. Given the fact that skating tends to be one of the toughest challenges for prospects to overcome in order to reach their full potential and Luke Hughes is already an elite skater should further comfort Devils fans. While it is impossible to know where Hughes ends up, one thing is certain: Luke Hughes has a nearly limitless ceiling. It will be exciting to see if he reaches it in the years to come.

The plan seems to be to bring Hughes over at the end of the University of Michigan’s season, so Devils fans should not have to wait much longer to see Luke skate with his brother Jack in the red and black. The prospect of adding a player of Luke’s potential to a roster that has risen as far as the Devils have this year makes this a great time to be a Devils fan.

*This chart was created on Friday so it does not include this past weekend’s games.

Though not putting up big numbers yet this season, Patrick Moynihan is scoring timely goals for Providence. Three of the senior’s four goals have been game winners and all four have been on the power play. A senior, Moynihan will be looking for his ELC at the end of the season as a two-way role player known for his high-end defensive game and play on special teams. I’d expect Moynihan to be signed for that reason, either by the Devils or another team looking for depth.

After some visa issues, Samu Salminen is settling in to his season for the University of Connecticut. Here’s a look at Samu Salminen’s first NCAA goal.

Artem Schlaine’s game has taken off after transferring to Northern Michigan to play for the Wildcats. Schlaine has been scoring at a nearly Pt/g pace this season, increasing his NHLe by 10 to 25. Schlaine’s offense has not gone unnoticed. NHL.com’s Peter Robinson recently wrote this piece about Schlaine’s rise and what he still needs to do to earn a contract with the Devils. [NHL.com] It’s a good read for those interested in learning more about Schlaine.

Much like Moynihan, Schlaine is scoring timely goals as well. Cue to 2:19 of the highlights below to see Schlaine’s game-winning goal that broke a scoreless tie with less than two minutes left against BSU on November 11th.

Much as Luke Hughes did his freshman season, Seamus Casey is turning heads. As of Friday night, the former 2nd round pick was leading all NCAA freshmen defensemen in points this season with 12 (he furthered that lead to 14 points after tallying two assists this weekend) and is already drawing offensive comparisons to Owen Power in some circles. [Michigan Daily]. The Devils look like they found another gem on the back end with Casey and it will be interesting to see how he develops.

Per Noah Kingley of the Michigan Daily, Casey has been sheltered somewhat paired next to shutdown defender Steve Holtz so far this season. [Michigan Daily] Despite that, Casey seems to be holding his own well enough in the defensive end as a freshmen. Here’s one of Casey’s goals against Windsor, the second goal in his first multi-goal night in the Big Ten.

Ethan Edwards suffered a high ankle sprain that kept him out of the lineup at the start of the season. Since his recovery, the 20 year-old LHD has 2 pts in 9 games for Michigan. Per John Tondura of the Michigan Daily, Edwards was “a little bit jumpy” in his return. [Michigan Daily] Expect Edwards to improve as he readjusts to hockey after the injury.

Not much is left to be said about the rise of Luke Hughes, the spotlight of this week’s article, who is still scoring at a point per game clip and skating circles around opponents. Feel free to salivate over these ridiculous spin moves that embarrassed Montreal Canadian prospect Rhett Pitlick.

Or examine this effortless, smooth-skating takeaway on the back-check and write in the comments if this reminds you of anyone.

While the offensive numbers haven’t been there yet for Viktor Hurtig after a belated start to his season for Michigan State, he was leading all defensemen on the team with a +7 before this weekend’s games for those who take comfort in that stat.

Charlie Leddy and Case McCarthy are both shutdown defensemen, who need to work on their skating and foot speed if they are going to make the jump to professional hockey. Leddy is known for his high defensive IQ and McCarthy for his physicality. Neither are projected to do much offensively at the higher levels, but as Jonas Siegenthaler proves, shutdown defensemen still have an important role in today’s NHL if they have elite defensive IQ and positioning and are able to play and skate at a high level.

As a freshman, Leddy’s collegiate career is just starting and given his ability to read and anticipate plays, he likely has the higher ceiling of the two if his skating improves to where it needs to be to play in the NHL. McCarthy, for his part, has taken a small leadership role as an alternate captain in his senior year. With ex-Devil Jay Pandolfo coaching the Terriers this season, management should get a very good read on McCarthy’s progress as they decide whether to offer the bruising defender an ELC this summer.

Cole Brady is putting up respectable numbers in a platooning role with with undrafted sophomore Luke Pavicich thanks, in large part, to a 32 save shutout in a 7-0 drubbing against Union on October 22nd. Brady’s GAA and SV% have both improved slightly since transferring to UMass after two seasons for Arizona State. However, Pavicich has looked even stronger with a 4-3-1 record, 2.64 GAA and a .920 SV%, so Brady will have to take advantage of his starts if he wants to earn more time.

NCAA PROSPECT OF THE MONTH

This was a tough call between Luke Hughes, Seamus Casey and Artem Schlaine, who are all having great starts their seasons, but in a close scrum, the freshman gets the nod. Stick tap, Seamus Casey. Keep up the good work.

What do you think about the progression of Luke Hughes and Seamus Casey? Should the Devils sign seniors Case McCarthy and Patrick Moynihan after their seasons end? Has Artem Schlaine arrived? Let us know your thoughts about them or any of the other Devils prospects in the comments.

Next week: An update on the Devils prospects playing in the Canadian Juniors with a spotlight on former first round pick Chase Stillman’s big five point night and his progression in the OHL.