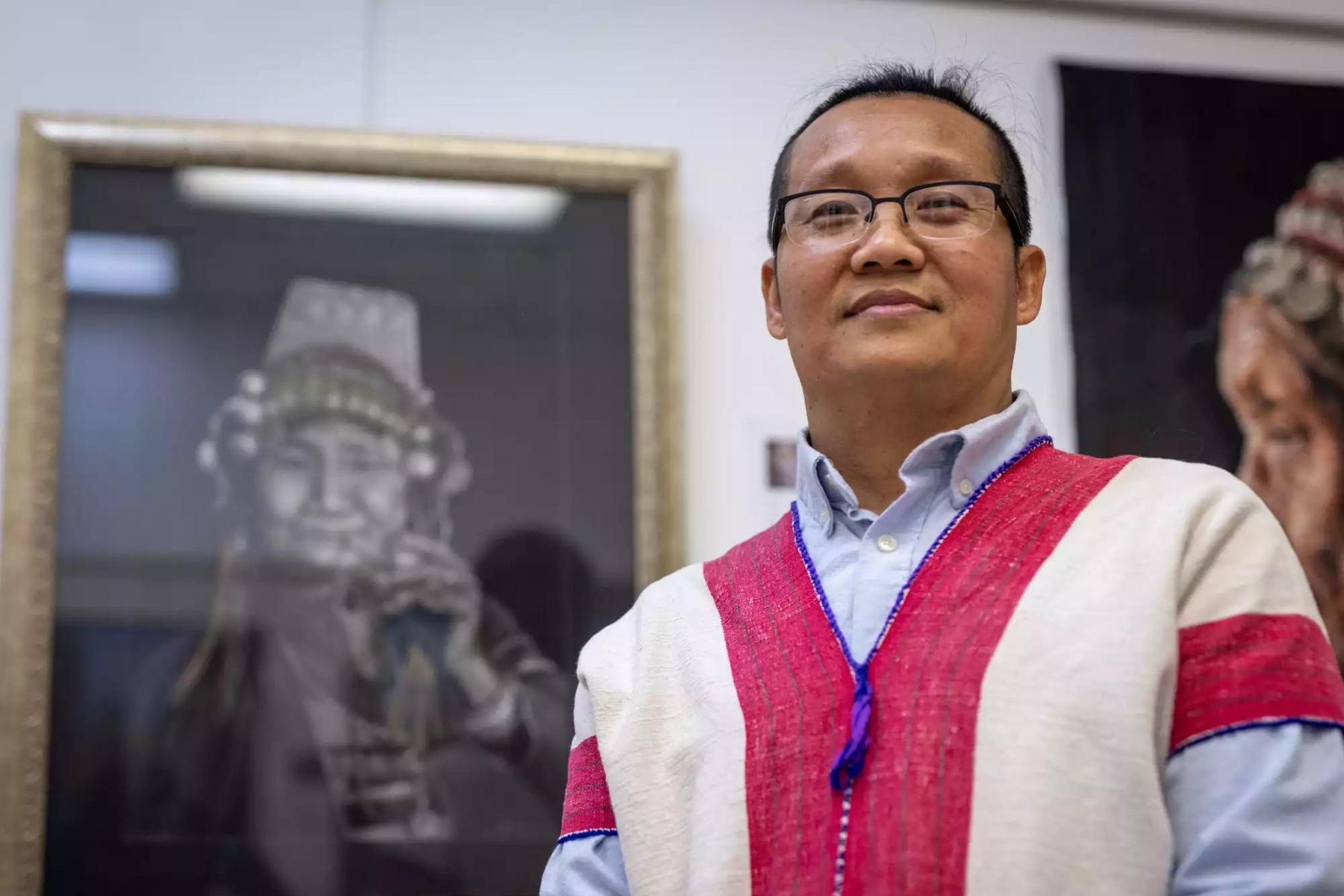 This story comes to you from MPR News through a partnership with Sahan Journal.

It took a year to get the artwork from Myanmar to St. Paul.

Artist and curator Saw Kennedy said the Myanmar government considers some of the artwork illegal, so to bypass censorship he said he smuggled the artwork to Thailand and then shipped the pieces to the United States.

The art is now on display in a new exhibit at Xia Gallery and Cafe, where organizers say is the largest collection of Myanmar artwork exhibited in the United States.

“This showing is sharing about the beauty of Burma,” Kennedy said with an air of deep respect. He is from a Karen village in Myanmar, formerly known as Burma, and came to the United States in 2008.

The exhibit is “sharing about what’s behind the story. Every painting tells about every artist’s imagination, feelings, and creations. That’s what we’d like to share with the international communities.”

On an icy Friday evening in December, a couple dozen people joined Kennedy at Xia Gallery to celebrate the opening of the exhibit and watch performances of Karen songs and traditional dance. “Window to the Soul: A Myanmar Group Exhibit” features 31 artists and is free to view until February.

It’s only the second exhibit for Xia Gallery, which opened in October on University Ave. W near Western Ave. N in an area known as Little Mekong, a business and cultural district near the Capitol in St. Paul, and focuses on showcasing Asian and Asian American art and artists.

A brief history of the Karen presence in Minnesota

The gallery features art and artists from Myanmar, specifically several ethnic minorities like the Karen, Karenni, and Pa’O and more to showcase unity.

According to the Karen Organization of Minnesota, there are estimated to be 20,000 Karen and 1,500 Karenni people in Minnesota. Karen people are from the area of Myanmar, formerly Burma. The Karen origin story claims they traveled from Tibet and China and then settled in the Myanmar area roughly 2,000 years ago.

When World War II began, the Karen allied with the British while the Burmese sided with the Japanese. In 1886, Britain colonized Burma, so ethnic groups such as the Mon, Shan, Thai, Burmese, Karen, and Karenni became part of Burma. In 1948, Burma was granted independence from Britain, but the Karen were not granted their own rights to land.

January 31, 1949, is Karen Revolution Day and marks the beginning of the Karen uprising, a fight for independence from the Burmese government. Since then it’s been the world’s longest ongoing civil war for almost 74 years. Today Myanmar is made up of more than 135 ethnic groups, with Burman making up ⅔ of the population and Karen and Karenni being some of the largest minority nationalities in Myanmar.

In the early 2000s, Karen people began to settle in Minnesota. Today, Minnesota is considered to have the largest Karen population outside of Southeast Asia.

The gallery is a project of the Asian Economic Development Association in St. Paul.

Asian small-business owners, community leaders and activists formed the association in 2006. The association has worked to brand and support Little Mekong.

Thus was the groundwork that led to the creation of Xia Gallery and Cafe.

The space can host performances like, “opening book receptions for authors, dancers or stand-up comedy comics. Also, they can do their own workshops if they’re like knitters or something too,” Asian Economic Development Association artist coordinator Npaus Baim Her said. It also offers writing circles and opportunities for Southeast Asian artists.

“Our program is called Solo Exhibit. We encourage artists to apply for the program if they haven’t held their own exhibit before. We provide that space for them to host their own exhibit and they go through the process of learning how to set up everything,” Her said.

Some of the paintings in the exhibit are also sold as small prints at the gift shop.

“The gift shop has a lot of Asian BIPOC art, artwork, and creative work. They get 100 percent of the profit,” Her adds.

This is the gallery’s second exhibit; the first featured Hmong artwork.

In the gift shop, “a majority of our items or artwork is from Hmong artists. That’s not a bad thing. It’s nice that we have a lot of Hmong people in artists in our space,” Her said.

Since the Karen and Karenni community is growing in St. Paul, Her wanted to represent their community in the space as well.

The artist who made the historic exhibit happen

Kennedy, the art curator, began his artistic career in 1988, “the same year as the “8-8-88 Uprising” in Myanmar, which was the day a massive general strike led by students, civil servants, and monks ignited weeks of protest. Kennedy uses a unique charcoal method, and also creates other work with watercolor and acrylic paints.

He is the lead organizer for a group of Myanmar artists called U&I, which is based in Indiana and makes up half of the artists showcased in the exhibit. The majority of the exhibit showcases artists from Myanmar; Some are local, some are international and one artist is even from Norway. The first exhibition of this collection of Myanmar art was at Artlink Gallery in Fort Wayne, Indiana.

Now nearly 50, Kennedy is planning to move to the Twin Cities, which will take a bit of time since, he chuckled, he has “over 100 paintings” to bring over from Indiana where he currently resides.

As the AEDA artist coordinator, Her reached out to her connections with Urban Village, a Karen and Karenni community space for artists and musicians in St. Paul, asking if there were any Karen artists that wanted to curate an exhibit at Xia.

Her, who is Hmong, connected with Saw Kennedy to exhibit the artwork shown at Urban Village in Xia Gallery.

“I feel like we have the same goals where we want to connect our communities together. Both the Karen and Hmong communities share a similar history of being forced to flee from our home country, and being refugees migrating to Minnesota.”

Kennedy also sees it as a strong partnership.

“I wanted to share opportunities with other Burmese artists from Burma. It’s amazing that Xia Gallery provides different programs, and supporting stipends–it’s the kind of budgeting I never saw before,” Kennedy said.

‘Know that we exist and that we live here’

“Our artwork speaks volumes showcasing what it’s like going through war, and using art to show the love for our culture, or what our past used to look like in our home country, and showing what our American life looks like now. So we’re able to connect on that level, and I’m glad he’s bringing all that artwork here so we can see it in a Karen and Karenni lens,” Her said.

The paintings range from realism to impressionism, portraits to landscapes.

Probably due to the secret measures taken, some of the artwork at the exhibit is not in “perfect” condition. The canvas of Zay Zay Htut’s piece “Today Life (Save Myanmar)” warped in travel, adding even more emotional depth about the protests and “suffocation in a small dark room, hoping for the light of democracy,” as the gallery label states.

Viewers can look for symbolism referencing the Karen national flag. The three main colors on it are “red for bravery, white for purity/sincerity, and blue for honesty. The nine rays of light streaming from the rising sun indicate the nine regions from which Karen people trace their origins,” according to the Karen Organization of Minnesota.

One example is a painting with a large blue tree with white snow patches on it, and a small silhouette of a person wearing red. They are facing toward the tree, admiring and “reflecting on the many things in nature that bring us greater knowledge and creative understanding,” the gallery label states. The blue and white tree can also represent the honest and sincere goals of the Karen people and the silhouette reflects the bravery it takes to do so.

Oo Meh, who is Karenni, was among the artists selling her work at the exhibit’s opening night. She said it’s an honor to have a Myanmar exhibit and hopes that “viewers will get a little more information about us, know that we exist and that we live here.”

Zak Min Chul visited the gallery with friends. He was moved by the exhibit and its representation of Karen and Karenni people and said he hopes to “see a day when their culture is celebrated and shown to the dominant culture and would actually start seeing these different cultures with all of their traditions.

“There are so many facets to it: there’s their agriculture, their art, their music, their food, it’s all very fascinating stuff. I hope to see more of this in the future.”