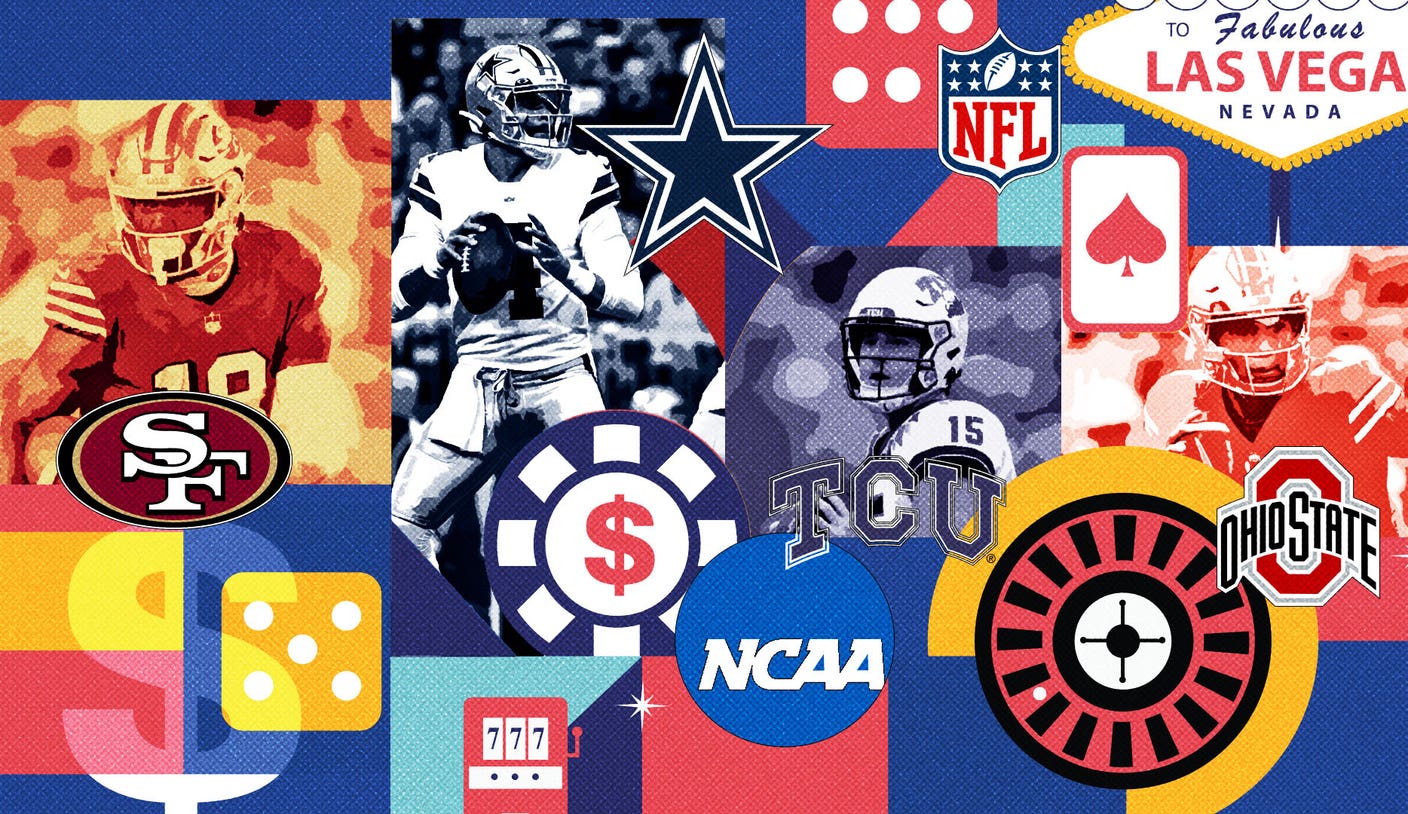 If you’re looking for something to be thankful for this week, well, you have this: Getting betting nuggets a day early for NFL Week 12 odds and college football Week 13 odds. Yep, the Thanksgiving holiday moved up the deadline, and you, loyal reader, are the beneficiary.

And while Michigan-Ohio State on FOX is huge this week, we have to start with the three-game Turkey Day football feast.

Specifically, let’s open with the middle matchup in this Thanksgiving sandwich, arguably the game of the week, as the Dallas Cowboys host the New York Giants. Which, by the way, is also on FOX and the FOX Sports App, with a 4:30 p.m. ET kickoff.

Dallas looked awesome in Week 11, blasting Minnesota 40-3 with the Cowboys as 2.5-point road favorites. So the ‘Boys are now 7-3 straight up (SU) and against the spread (ATS). That’ll pay some bills if you’re betting on the Cowboys.

The Giants surprised many with their 6-1 SU and ATS start, but they’ve since dumped two of three to also stand at 7-3 SU and ATS. Last weekend, New York closed as a 3-point home favorite against Detroit and tumbled 31-18.

With Dallas looking hot and New York not, WynnBet opened the Cowboys -8 Sunday night. By Tuesday night, the line was already up to Cowboys -10. That comes as no surprise to WynnBet senior trader John Manica.

“It’s Turkey Day. Favorites and Overs are the usual fun bets that the public likes to make on this holiday,” Manica said. “The Giants’ loss, coupled with the Dallas blowout win of the Vikings, has this primed to be a lopsided liability affair. Even though the public is likely to be backing the Cowboys and the Over, we took a sharp wager at -8 on the Cowboys, and we immediately moved to -9.”

“The total also had some respected opinions, as we took bets at 43.5 and 44.5,” Manica said. “It would not surprise me to see both of these numbers continue to climb as we head toward Thursday. The book will surely be rooting for the Giants and the Under.”

Professional bettors like to hit numbers early if they feel there’s an advantage. One sharp player did so with three games on the NFL Week 11 odds board, including the Thanksgiving nightcap, in which the New England Patriots travel to face the Minnesota Vikings.

“I like the Vikings -2.5,” he said while noting what he feels is a key Patriots injury, with center David Andrews (thigh) doubtful to play. “And the quick turnaround hurts the New England coaching staff.”

Indeed, the Pats (6-4 SU, 6-3-1 ATS) have to travel on a short week. Meanwhile, the Vikings (8-2 SU, 4-5-1 ATS) are probably dying to get back on the field and prove themselves after the embarrassing home loss to the Cowboys.

The bettor is also looking at the Falcons-Commanders contest, a 1 p.m. ET Sunday start on FOX.

“I took Washington -3. The Kyle Pitts injury hurts Atlanta,” he said, alluding to the tight end going on IR with a knee injury. “I’d lay up to 6 points with Washington. That’s an underrated team. I grabbed them at 80-1 to win the NFC.”

He also is on the Seattle Seahawks -3 (-120) against the visiting Las Vegas Raiders.

Furthermore, he likes Cincinnati at Tennessee if Bengals wideout Ja’Marr Chase (hip) is cleared to return for Sunday’s game. More on that below.

Joel Klatt breaks down why he believes two Big Ten teams could reach the CFP and gives his 12-team playoff format.

It could easily be argued that the biggest game this weekend is the Big Noon FOX clash between unbeatens Michigan and Ohio State at the Horseshoe in Columbus, OH. Just when you thought Thanksgiving weekend couldn’t get any better, there’s Gus Johnson on the call for a vitally important game in the College Football Playoff chase.

WynnBet opened this mighty matchup favoring Ohio State -8 (-115) Sunday evening, and shortly thereafter, the initial move was to Buckeyes -8.5. By late Sunday night, however, the line fell to Ohio State -7.5, where it’s spent the past couple of days.

The dip down is running counter to the betting action.

“We’ve seen Buckeyes money for the most part,” WynnBet junior trader Caden Wickwire said. “The current spread of -7.5 may come across as short, considering Ohio State is looking to make a statement win before a push for the national title. The Buckeyes have a chance to avenge last year’s 42-27 loss.”

“We haven’t seen much action there. We expect that to change as the jam-packed week of sports betting continues,” Wickwire said.

FOX also has the pivotal Iowa State-TCU game Saturday, with the Horned Frogs (11-0 SU, 8-2-1 ATS) aiming to stay among the top four in the College Football Playoff rankings. As of late Tuesday night, Texas Christian is a 10-point home favorite.

With how well the Horned Frogs have treated point-spread bettors this season, public/recreational players will likely once again back TCU, laying those double digits for a 4 p.m. ET kickoff.

Thrill of the Chase

Oh, and a certain stud wideout might be back for the Bengals, who, for the moment, are 1.5-point road favorites at WynnBet.

“It is early in the week, and reports are out that star wide receiver Ja’Marr Chase is on the practice field,” Manica said, noting Chase could return from his three-game absence with a hip injury. “If he goes, then we will see some Bengals backers immediately weigh in, and the price will climb to -2.5 or even -3. Joe Burrow has the Bengals humming and in playoff contention.”

That said, Manica noted the Titans are cruising atop the AFC South, and they’re coming off the mini-bye. In Week 11, Tennessee played the Thursday nighter at Green Bay and won 27-17.

“This contest has had respected bets on both sides, as we took a wager at -1.5 on the Bengals, then a few hours later, the Titans +2 was nabbed, bringing us back down,” Manica said. “This one is a toss-up, as the betting public is likely divided with the sharps. Look for the Chase news to determine the movement of the market. The brilliant Burrow against the hammering Derrick Henry is surely going to be entertaining.”

With this report dropping a day earlier than normal, there’s not much to report in the way of #MajorWagers for the upcoming games. But the Monday Night Football game in Mexico City attracted all sorts of attention.

Caesars Sports reported a bevy of big plays on the San Francisco 49ers-Arizona Cardinals clash. And most of the action was on the underdog Cardinals. The rundown:

“The need for a favorite to win and cover is way above sea level.”

Sure enough, Caesars got what Caesars wanted. The Niners rolled 38-10, easily covering as double-digit favorites.

Here’s hoping we can all live like Caesars on this football feast of a weekend. Happy Thanksgiving!

Patrick Everson is a sports betting analyst for FOX Sports and senior reporter for VegasInsider.com. He is a distinguished journalist in the national sports betting space. He’s based in Las Vegas, where he enjoys golfing in 110-degree heat. Follow him on Twitter: @PatrickEVegas.

Download the FOX Super 6 app for your chance to win thousands of dollars on the biggest sporting events each and every week! Just make your picks and you could win the grand prize. Download and play today!

Get more from National Football League Follow your favorites to get information about games, news and more