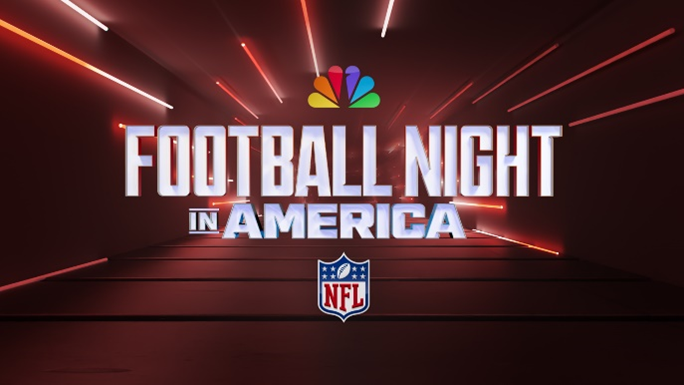 “This guy is Magic Johnson…Leading the break, the no-look throws…Never seen anything like this on a football field.” – Jason Garrett on Patrick Mahomes

“We ain’t come this far to (only) come this far. We’re going to win this game. That’s our mentality.” – Jaguars LB Josh Allen to Rodney Harrison

“The job he’s been able to do…to really change that negative mindset and that losing mentality, he should be Coach of the Year.” – Harrison on Jaguars Head Coach Doug Pederson

STAMFORD, Conn. – Jan. 21, 2023 – NBC Sports began its coverage of the NFL Divisional Playoffs today with a special on-site edition of Football Night in America leading into the Jacksonville Jaguars vs. Kansas City Chiefs matchup from GEHA Field at Arrowhead Stadium in Kansas City, Mo., on NBC, Peacock and Universo.

Portions of the following interviews aired today on FNIA and you can watch the entire interviews here:

Following are highlights from tonight’s edition of Football Night in America on NBC and Peacock:

Garrett on the matchup: “The goal for every head coach is to be who you are. Get your team to be the best versions of themselves…For Jacksonville, it’s handling the moment. For Kansas City, be who you are.”

Garrett on the coaching similarities between Andy Reid and Doug Pederson: “Schematically, you put this tape on, it’s like they’re mirror images of each other. One thing that jumps out is the quarterback-friendly environment that they put their players in.”

Taylor on Mahomes’ alley-oop touchdown pass in Week 4 against Tampa Bay: “We were there in Tampa. He literally practiced this in front of us. He hits a spin move, then an alley-oop, and that was the best play I’ve ever seen and then he did three more the rest of the season that look just like it.”

Garrett: “You guys have been talking Steph Curry. This guy is Magic Johnson…Leading the break, the no-look throws…Never seen anything like this on a football field.”

Simms: “I’ll see your Magic and go Kareem Abdul-Jabbar…What about (a throw) across the field with a hook shot. Never have seen some of the throws we’ve seen from Patrick Mahomes.”

Taylor: “The reason we kept comparing him to basketball is because we’ve never seen it on a football field, so there’s really no comparison.”

Chiefs head coach Andy Reid to Simms on Kansas City’s trick plays: “Those come from everybody, and nobody claims them, that’s the cool part. It’s not to embarrass the other team. We’re doing it to have something different in this league that you can score with. Who’s to say something’s impossible? You just got to think that way, ‘Let’s try and see what’s possible.’”

Harrison on defensive coordinator Steve Spagnuolo: “He’s done a wonderful job giving Chris Jones the freedom he needs to become the player he’s become – the best defensive lineman in all of football.”

Harrison on playing at GEHA Field at Arrowhead Stadium: “This place is the loudest place I’ve ever played…It’s really a pleasure to play here.”

Harrison on the Chiefs’ running backs: “Every time (Isiah Pacheco) touches the ball, he runs like it’s his last play. He’s physical, he brings a lot of toughness and energy. A complement to him is Jerick McKinnon. I don’t call him a running back or a receiver, I call him a playmaker.”

Garrett on Chiefs offensive line play: “Reflect back to the Super Bowl a couple years ago (Super Bowl LV) when Kansas City’s offensive line was in shambles. It really goes to the alignment in this organization. They had a need, they addressed it, and they got three excellent football players up front. It’s one of the strengths of their team.”

Garrett on the Chiefs’ postseason mentality: “I think the other thing that works in Kansas City’s advantage is what happened last year against Cincinnati (in the AFC Championship Game). They get off to the great start and then right before halftime, they got a little bit frivolous, they turned the ball over, Cincinnati uses that to their advantage. They know they have to play 60 minutes to come out with a victory.”

Dungy on head coach Doug Pederson: “When these players talk about Doug, they talk about belief, but they also talk about calmness. He told me that sitting out a year and spending time with his brother who was battling cancer really taught him that calmness, that football games aren’t the most important thing.”

Pederson to Dungy on last week’s 31-30 comeback victory against the Chargers: “There was no quit in this team…I told the offense at halftime that we were going to have to score every time we had the football and we did.”

Zay Jones to Taylor on the team’s mentality during their 27-point Wild Card comeback: “You can’t score 27 points in one play, so I’m looking at Christian (Kirk) like, this is going to say a lot about who we are as men in how we finish this game.”

Harrison on LB Foyesade Oluokun: “I don’t think we truly appreciate what this young man has accomplished the past two years leading the league in tackles – it’s very difficult to do.”

Garrett on S Rayshawn Jenkins: “It seemed like every time they needed to make a play on the ball in a big moment, he was the guy who did it…He’s provided veteran leadership to this team, but also playmaking ability in critical moments.”

King on Eagles QB Jalen Hurts’ return from injury: “I don’t think he’s going to have a lot of trouble throwing the football…I think most people around the team feel like he’s going to be able to throw the ball just fine. The big question is, will he be able to run the ball with the same authority that he did when he averaged 11 rushes per game in the regular season?”

Jac Collinsworth on Eagles WR A.J. Brown’s impact on the team: “We got to give some credit where it’s due. How about (Eagles general manager) Howie Roseman getting the missing piece for that team, A.J. Brown, one of the most productive offseason pickups anywhere.”

Florio on Sean Payton’s head coaching future: “The Broncos, the Cardinals, the Texans, the Panthers, they’re all interested. Even though (Sean) Payton said this week that the Saints, who still hold his contractual rights, would want a mid-to-late first round pick in the event that he goes to a new team, I’m told the Saints want more than that, and would definitely want more if he goes to the Panthers, who play in the same division.”

Florio on Chiefs offensive coordinator Eric Bieniemy: “This is the fifth cycle for Eric Bieniemy and has yet to receive an offer to become an NFL head coach. I’m told this year his best shot is with Indianapolis, but it is a crowded house there. Fourteen candidates, 11 interviews. I’m told early next week they’ll trim that field up to five candidates for second interviews. Bieniemy could be one of them. If not, he’s going to have to wait another year.”

Garrett on the process of NFL coaches interviewing for open positions during the playoffs: “I think the NFL has to change the process. They have to slow this thing down because it’s unfair to everybody involved. No disrespect to the coaches who are doing these Zoom interviews, it’s part of their profession. But the set-up is bad and it takes their attention away from the ball game.”

Dungy: “The key word there: ‘unfair.’ I think it’s unfair to a lot of people. These fans are trying to see their team succeed in the playoffs. It’s unfair to these players and it’s unfair even to the owners. How are you going to get a good picture of a person when they’re concerned with dealing with a playoff game and interview for your team?”

Simms: “It’s unfair to the overall product of the NFL. (Cowboys defensive coordinator) Dan Quinn needs to be in there coming up with a few more blitzes for Brock Purdy and how to stop the run game. Instead, he’s a little worried about an interview.”