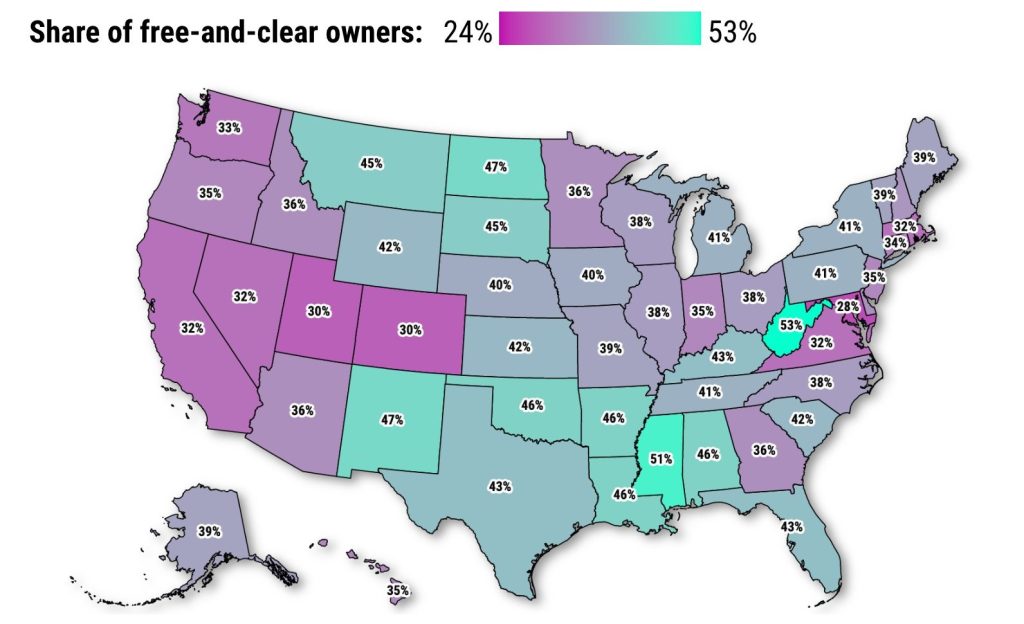 ”Survey says” looks at various rankings and scorecards while noting these grades are best seen as a mix of artful interpretation and data.

Buzz: California has 2.4 million households living what many consider a dream – being a free-and-clear homeowner, the third-highest count among the states.

Source: My trusty spreadsheet reviewed Census data tracking homeowners – dividing households between those living with or without mortgages – for 2021 in the 50 states and the District of Columbia.

Where were most owners free and clear of any home loan in 2021?

They’re in Texas at 2.9 million, and Florida at 2.5 million. After California comes New York at 1.7 million and Pennsylvania at 1.5 million.

Yet no-mortgage owners in California are only 33% of all homeowners – and only four places have a smaller share: D.C. at 24%, Maryland at 28% and Colorado and Utah at 30%.

West Virginia has the largest share of free-and-clear owners at 53%, followed by Mississippi at 51%, North Dakota and New Mexico at 47% and Louisiana at 46%. By the way, Texas and Florida were both at 43%.

Census tracks the expenses owners incur for their shelter such as property taxes, insurance, routine operation and upkeep of the residence, and mortgage payments – or not, in the case of the free-and-clear crowd.

In California, that spending translated to median monthly housing cost for a no-mortgage household of $694 in 2021. That was the ninth-highest among the states and not terribly surprising considering Californias pricey cost of living.

The priciest states for free-and-clear owners were New Jersey at $1,081, then Connecticut at $926, Massachusetts at $871, New Hampshire at $860 and New York at $813. These are states known for huge property tax bills.

Now compare those monthly expenses to the extra spending by owners with mortgages.

Let’s think about the no-mortgage owner’s savings on a percentage basis.

In California, 2021’s free-and-clear costs were 72% below those paid by mortgaged households, No. 3 among the states with Louisiana and Nevada. Bigger savings were only found in Hawaii at 77%, and Virginia at 73%.

Despite the low ownership costs for folks without a mortgage, meeting housing costs can still be a struggle.

Some long-time owners who’ve paid off home loans can still be financially stressed by other housing costs that strain their cash flow. However, these folks do own a valuable assets with no loan – a potential nest egg to tap if a financial crisis emerges.

In California, 17% of free-and-clear owners in 2021 were considered “burdened” by housing costs because they spend 30% or more of their income on shelter. That was the eighth-highest level nationwide.

Lowest? Utah at 9%, then Indiana, Tennessee and Virginia at 10%.

Jonathan Lansner is the business columnist for the Southern California News Group. He can be reached at jlansner@scng.com