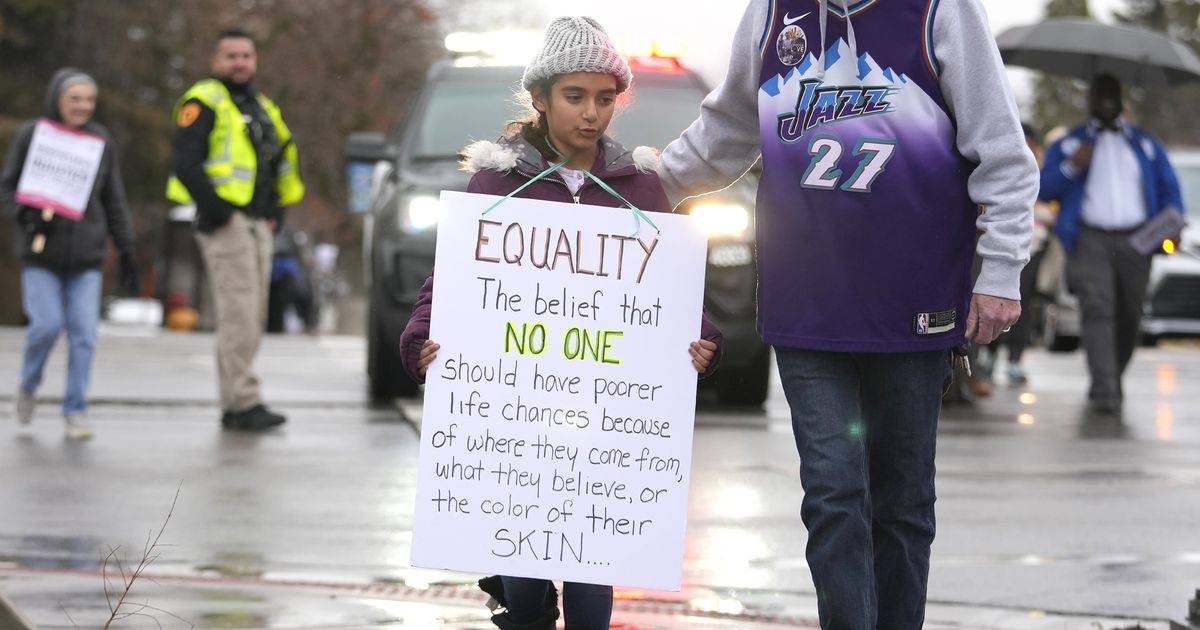 Owens, Stewart and others quote King’s words while opposing his principles.

(Leah Hogsten | The Salt Lake Tribune) Ed Kirby, right, and his granddaughter Aneveah Lanzalaca participate in the march from East High School to Kingsbury Hall on Monday. To commemorate the legacy and work of Martin Luther King, Jr. and many other activists fighting for racial equality during the Civil Rights movement, the University of Utah’s office of Equity, Diversity & Inclusion kicked off MLK Week 2023 with a rally at East High School, followed by a march to Kingsbury Hall, Jan. 16, 2023.

Martin Luther King was opposed to violence in all of its forms. So there is no way he would countenance anyone slapping the face of any Utah politician who launched some obligatory MLK Day quotes on their Twitter feeds Monday.

But to paraphrase the come-to-blows-at-the-Oscars Will Smith, a lot of Republicans should keep King’s name out of their mouths.

The day being a federal holiday — and, 15 years late, a Utah holiday — government offices were mostly quiet Monday. Except for industrious interns pumping out the standard “content of their character” tweets and posts.

On his official Twitter feed, he quoted everyone’s favorite snippet of the “I Have a Dream” speech.

“I have a dream that my four little children will one day live in a nation where they will not be judged by the color of their skin, but by the content of their character.”

Today, we honor the legacy of Dr. Martin Luther King Jr. and continue striving to bring his dream to life. pic.twitter.com/iT6txcd06f

On his personal/campaign thread, Owens picked up a good, lesser-known, line, “Faith is taking the first step even though you don’t see the whole staircase.”

All very well and good.

Except, just down the feed, Owens approvingly retweeted a clip of a Faux News interview with the new Republican governor of Arkansas, and former Donald Trump lackey, Sarah Huckabee Sanders, going on about how she had just banned the teaching of “critical race theory,” aka CRT, in the state’s schools.

May we always pursue the better nation he imagined for us all: one of freedom, equality, and opportunity for all. pic.twitter.com/oEtk3bVP9C

It is either the height of dishonesty or the pinnacle of ignorance to try to associate yourself with Martin Luther King’s legacy while at the same time denying the core of the man’s message.

Critical race theory is a framework for looking at American history and law in a way that recognizes a simple truth: Racism is embedded in this nation, its law, culture and institutions from before day one. It is not all we were, or all we are. But it is a loomingly large part of it, and if we are ever going to realize our potential as a great nation, we must look that truth in the face and deal with it.

That’s what King said, in his March on Washington speech, when he told us that the sentiments and aspirations of Declaration of Independence constituted, when it came to Black Americans, a bounced check.

He challenged us, he challenges us still, to make good on that debt. That’s not, as the anti-CRT alarmists claim, hating America. It’s loving America. OK, kind of tough love, like staging an intervention for a drug-addicted relative. It is calling on our nation to “live out the true meaning of its creed.”

It’s not only their denial of the history of racism that should make so many of our politicians ashamed to quote King on his holiday. It is the fact that so many of them have devoted their political careers to opposing other things that he stood for.

Today’s Republican platform opposes everything the Civil Rights Movement was about. It has, in state legislatures, Congress and the courts, eviscerated the Voting Rights Act. It won’t raise the minimum wage. It won’t make access to health care a basic human service. It doesn’t see the need to do anything about the number of unarmed Black men shot in the streets by police.

King went to Memphis, where he was murdered, to support a strike by the mostly Black sanitation workers in that city. It was there, on the last full day of his life, that King called out not only racial inequality but also economic inequality. He called for the Black community to flex its economic muscle, to boycott businesses with racist hiring patterns, to take their money to Black-owned banks and insurance companies.

King knew that there are forms of anti-Black and anti-poor violence that aren’t as blatant as guns or dogs or firehoses. He knew that people not having access to an honorable way to make a good living and have a decent home, not being allowed to take your children to the same amusement parks that white kids go to, not be able to get the same level of education or health care, are all forms of violence.

To stand up for these truths today is to be labeled “woke.” A short word, according to some social media wit, used by people who cannot spell “empathic” “educated” or “enlightened.”

Says Max Von Sydow’s character after happening upon some TV evangelists: “If Jesus came back and saw what’s going on in his name, he’d never stop throwing up.”

George Pyle, opinion editor of The Salt Lake Tribune, is proud to be called woke. Though he sometimes has a hard time staying awake.