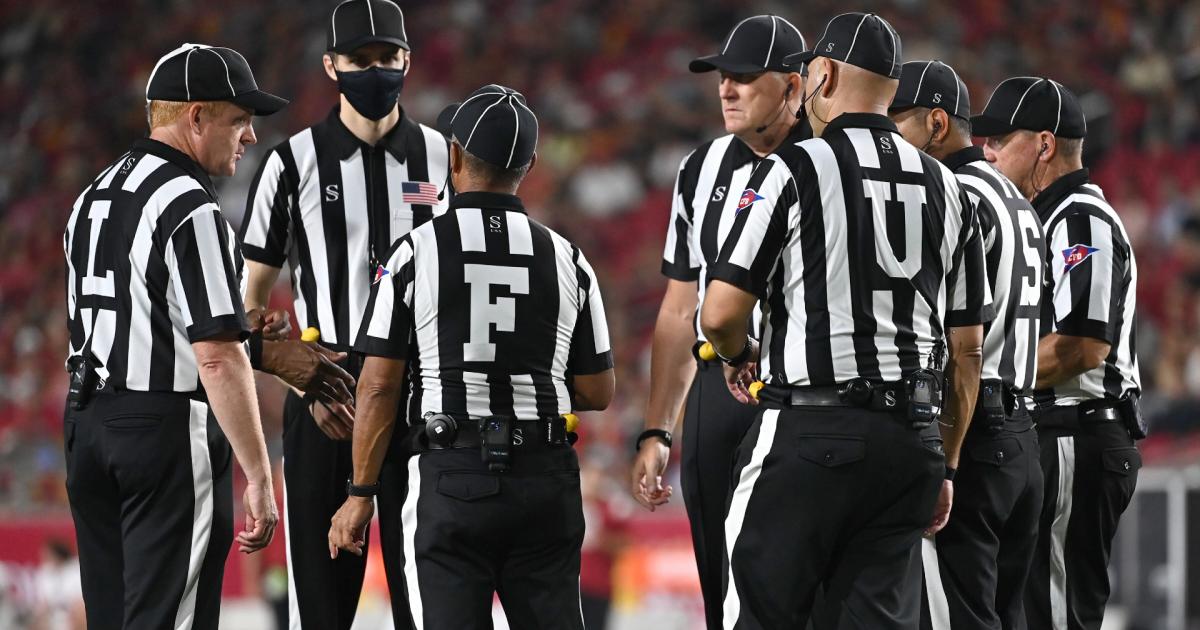 Michigan entered Saturday’s Fiesta Bowl against TCU as a significant favorite to advance to the College Football Playoff national championship game. Then the Wolverines had their dreams dashed with a 51-45 loss that ended in controversial fashion.

Facing a fourth-and-long in the closing seconds, Michigan quarterback J.J. McCarthy fumbled the snap, triggering a mad scramble that ended with a short gain — but also potential targeting by the Horned Frogs.

After review, the call on the field of no targeting stood, ultimately locking the game up for TCU and eliminating Michigan.

HE HAS TROUBLE WITH THE SNAP pic.twitter.com/aGZ7JAN1qc

Michigan had its share of struggles throughout the game. McCarthy threw two pick-sixes and there were myriad defensive lapses. But a targeting call would have kept their last-gasp drive going.

The decision not to call it after a review befuddled people who thought the crew engaged in situational officiating.

College football implemented the tageting rule to protect players from head trauma and establish big repercussions for players who compromise other players’ safety.

According to the NCAA rulebook: “No player shall initiate contact and target an opponent with the crown (top) of his helmet. When in question, it is a foul.”

Why wasn’t TCU called for targeting?

This is what some people are trying to figure out.

“Replay determined no targeting at the end of the #FiestaBowl. The “crown” was re-defined at the beginning of the season to be more narrow – this hit was likely too much on the side of the helmet for replay to add foul,” the poster wrote.

A different angle of the hit:

This play at the end of the 4th quarter was reviewed and the play was not called for targeting. pic.twitter.com/fzVUgISaag

Much of the football world was tuned into this game, which means opinions were flying. Those who played at the college or NFL level seemed split about whether targeting should have been called. Analysts thought the situation influenced the officials’ decision to swallow the whistle.

No way they can call that in this moment 🤣🤣

Replay in CFB is broken & Targeting foul is equally broken!

That’s targeting, I told you TCU would bend reality and warp the fragile fibers of your mind

College football running itself like the NHL here. That was rulebook targeting but let us not pretend this was the first time that refs simply decided they weren’t really in the mood to get a police escort out of a building

Too many mistakes to pin UM’s loss on the refs, but if that’s not targeting — as dangerous a play, on the back of Loveland’s head and neck, as there is — then nothing is.

One prominent former player — albeit with a rooting interest — wanted a call:

I’ve seen a lot of targeting calls in college football that i disagree with and have said so.. of the targeting calls upheld that sure looked like one.. anyhow congrats TCU #Goblue

This sequence will help to fuel another offseason of debate about what is and isn’t targeting. All we know now for sure is that TCU will be playing for the national championship on Jan. 9.