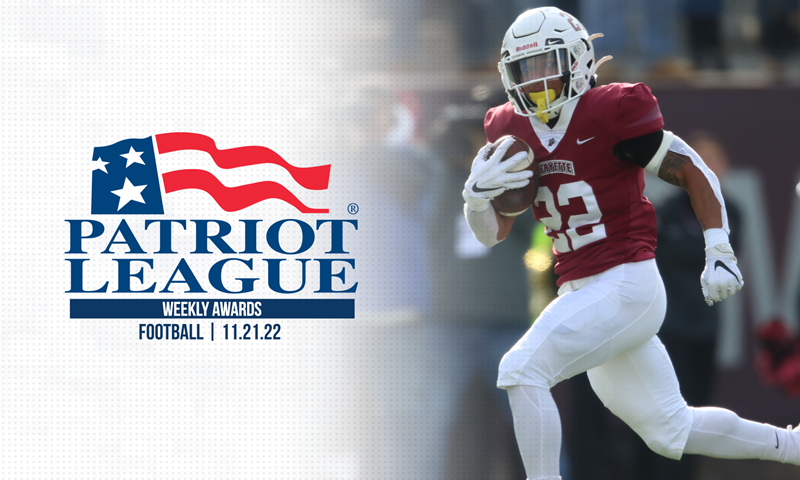 Leopards’ senior linebacker Billy Shaeffer was named Patriot League Football GEICO Defensive Player of the Week after returning an interception for a 50-yard touchdown in a 14-11 victory over Lehigh in the 158th playing of The Rivalry. Freshman running back Jamar Curtis collected GEICO Rookie of the Week honors after rushing for 108 yards on 10 carries, including a 71-yard touchdown against the Mountain Hawks.

Fordham senior quarterback Tim DeMorat captured Patriot League Football GEICO Offensive Player of the Week for the ninth time this season after throwing for 454 yards and six touchdowns in a 52-38 win against Colgate. He became the League’s single-season record holder in passing yards while also breaking the League career records for touchdowns responsible for and passing touchdowns.

The Patriot League football players of the week are selected in a vote by League media members and each school’s sports information directors, who are not eligible to vote for their student-athletes.


PATRIOT LEAGUE FOOTBALL GEICO OFFENSIVE PLAYER OF THE WEEK
Tim DeMorat, Fordham, Sr., QB, Merritt Island, Fla./Viera
*DeMorat completed 33-for-51 passes for 454 yards while tying his career-high with six touchdown passes in a 52-38 victory over Colgate.
*He posted his sixth 400-yard passing game to tie a Patriot League record while finishing the regular season with 4,561 passing yards to break a single-season League record.
*The two-time League offensive player of the year also became the League’s career record holder in touchdowns responsible for (137) and touchdown passes (120).

PATRIOT LEAGUE FOOTBALL GEICO DEFENSIVE PLAYER OF THE WEEK
Billy Shaeffer, Lafayette, Sr., LB, Washington, Pa./Archbishop Wood
*Shaeffer received MVP honors for the 158th playing of The Rivalry after returning an interception 50 yards for a touchdown and recovering a fumble.
*He finished with eight tackles and two quarterback hurries while helping the Leopards’ defense hold Lehigh to 61 rushing yards.
*The senior linebacker’s interception return for a touchdown proved to be the game-winning touchdown.

PATRIOT LEAGUE FOOTBALL GEICO SPECIAL TEAMS PLAYER OF THE WEEK
Spencer Biscoe, Colgate, So., PK, Landisville, Pa./Hempfield
*Biscoe went 5-or-5 on PATs and connected on a 27-yard field goal in Colgate’s loss at Fordham.
*The five extra points tied a career-high for the sophomore placekicker.
*He finished the regular season leading the Patriot League by connecting on 73.7 percent (14-for-19) of his field-goal attempts.

PATRIOT LEAGUE FOOTBALL GEICO ROOKIE OF THE WEEK
Jamar Curtis, Lafayette, Fr., RB, Waldorf, Md./St. John’s College
*Curtis rushed 10 times for a career-high 108 yards and a touchdown to help Lafayette defeat Lehigh, 14-11.
*He rushed for a 71-yard touchdown on the Leopards’ first possession of the game. It was Lafayette’s longest play from scrimmage this season.
*The Waldorf, Md. native also tied for a team-high five receptions, totaling 13 yards.

HONORABLE MENTIONS
Rushawn Baker, Bucknell, Jr., RB, Victor, N.Y./Victor
*Baker rushed for a career-high 120 yards and two touchdowns to lead Bucknell to a 24-13 victory over Marist. He caught a two-yard touchdown pass in the third quarter and rushed for a six-yard touchdown in the fourth quarter.

Brent Jackson, Bucknell, Sr., S, Denton, Texas/John H. Guyer
*Jackson finished with eight tackles, one sack, a forced fumble and a pass breakup in Bucknell’s 24-13 victory over Marist. He helped the Bison defense limit the Red Foxes to 48 yards in the second half.

Michael Brescia, Colgate, So., QB, Hinsdale, Ill./Hinsdale Central
*Brescia passed for 257 yards and two touchdowns in a loss at Fordham. He also rushed for 85 yards, including a 58-yard touchdown against the Rams.

J.C. Gaughan, Colgate, Sr., LB, Scranton, Pa./North Pocono
*Gaughan tallied a career-high 14 tackles, 2.0 TFLs and a half sack in a loss at Fordham.

James Conway, Fordham, So., LB, Omaha, Neb./Millard West
*Conway recorded a team-high 13 tackles and a half tackle for loss in Fordham’s 52-38 victory over Colgate. He also forced a fumble.

Matthew Sluka, Holy Cross, Jr., QB, Locust Valley, N.Y./Kellenberg Memorial
*Sluka completed 12-of-15 passes for a career-best 301 yards and three touchdowns to lead the Crusaders to a 47-10 victory at Georgetown. He also rushed for 77 yards to help Holy Cross finish the season with an undefeated 11-0 record, the first League team to accomplish that feat since 2003.

ABOUT THE PATRIOT LEAGUE
The Patriot League is in its fourth decade of academic and athletic achievement, continually demonstrating that student-athlete can excel at both academics and athletics without sacrificing high standards. The Patriot League’s athletic success is achieved while its member institutions remain committed to its founding principle of admitting and graduating student-athletes that are academically representative of their class. Participation in athletics at Patriot League institutions is viewed as an important component of a well-rounded education.