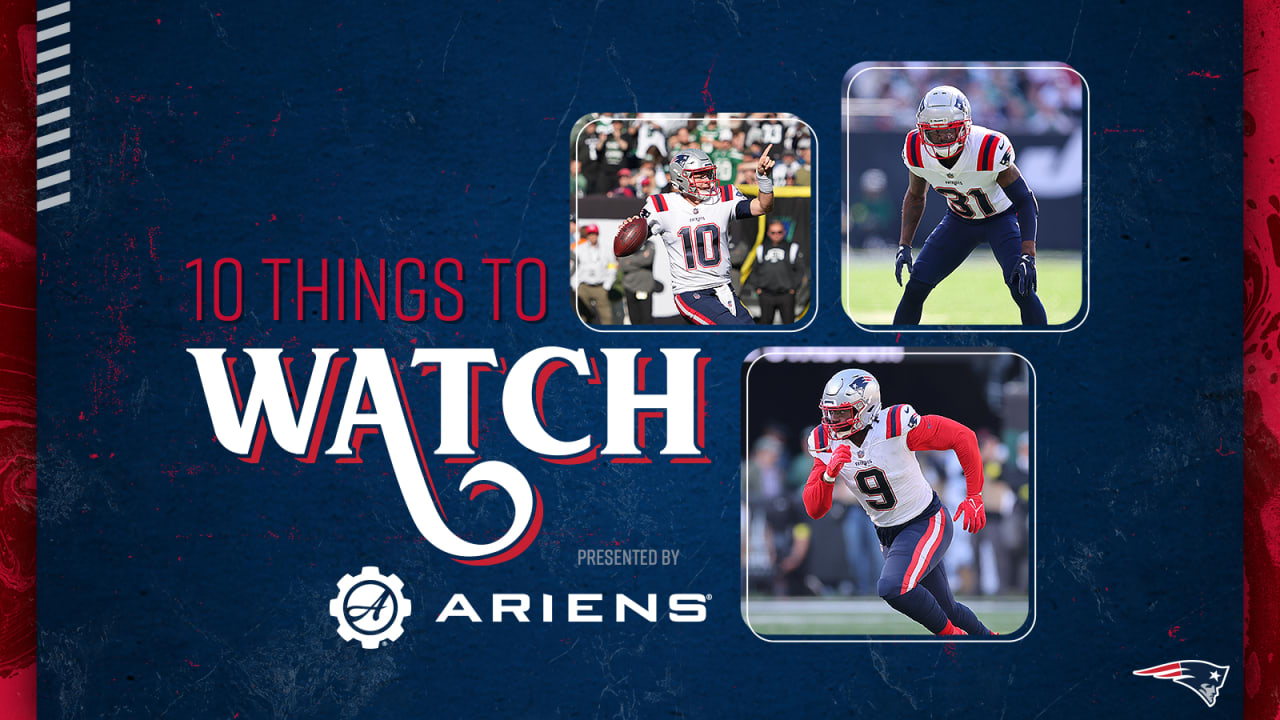 Despite an offensive output of just three points, Mac Jones had one of his best games of the season against a tough Jets defense, completing 85.2 percent of his passes for 246 yards and a 104.6 quarterback rating. Mac also avoided turning the ball over for just the second time this season as the second-year quarterback is establishing a baseline of solid play. With Minnesota’s 20th-ranked pass defense there could be more opportunities for Mac to make strides in this one, however, the status of his protection will be a major concern in this one, with David Andrews and Isaiah Wynn both expected to miss time. Mac was sacked six times by the Jets, matching their output from the first matchup of the season. That kind of pressure won’t allow the offense to take the necessary next step, Jones will have to find a way to be productive despite having some backups protecting him.

With Andrews and Wynn expected to be out the focus is on their fill-ins, right tackle Yodny Cajuste and center James Ferentz. Cajuste was tagged with letting up two sacks and five total pressures against the Jets, while Ferentz allowed one sack and one pressure. Against a tough Vikings front, Ferentz and Cajuste will have another tough challenge in relief ahead of them. Could rookie Kody Russey, recently promoted from the practice squad get a look? On a short week, it’s likely the Patriots will try to minimize the changes. For an offense that badly needs to take a step forward and find consistent production,the state of the offensive line is a significant complication.

With Vikings starting left tackle Christian Darrisaw already ruled out, Judon and fellow end Deatrich Wise should have opportunities to get after quarterback Kirk Cousins. Minnesota allowed seven sacks against the Cowboys and that pass-rush pressure contained the Vikings attack to a mere 183 total yards of offense. A first-drive fumble set the tone for the day and even though that was their only giveaway of the day, they struggled to mount an attack, with just a single drive lasting more than seven plays. Judon continues to add to his sack total, leading the league with 13. He could feast on Thanksgiving and lead the Pats to another win.

Bentley has emerged as one of the key leaders on defense for the Patriots and is playing some of the best ball of his career in his. He led the team with five stops against the Jets and ranks second behind Matthew Judon for the season with 21 total stops. The Pats will need that kind of downhill performance from Bentley against the Vikings with talented running back Dalvin Cook possessing the ability to change the game with his hard rushing style. Bentley’s leadership and communication will be in high demand during the short week and the team will hope his physical edge isn’t dulled too much by an insanely fast turnaround between games.

The Patriots will likely have a diverse and team-oriented plan to deal with Justin Jefferson but Jonathan Jones is a good bet to see more than his fair share of matchups against the griddy-inventing receiver. Jones has been outstanding this year, playing primarily on the outside for the first time in his career. His 80.4 coverage from PFF ranks him second on the team, while he’s allowed just 12 completions on 29 targets, easily a team-best. With two interceptions he’s also tied with Jack Jones and Devin McCourty for the team lead. Whether he sees Jefferson or Adam Thielen, Jones will be a major part of the gameplan.

As you might expect, Cousins is coming off his worst game of the season. He completed just 12-of-23 passes and failed to throw a touchdown for the first time this season. Overall, he’s thrown 14 touchdowns to eight interceptions, but also has his lowest completion percentage (63.4) since joining Minnesota in 2018. Losing his left tackle was obviously a huge blow, just like it is for the Patriots. Cousins is a quarterback who is at his best when everything is working around him, but with injuries mounting for his weapons and his protection this could be shaping up to a challenging game, especially with it coming on national TV a stage he’s struggled on.

Jefferson has taken the league by storm since joining Minnesota who selected him 22nd overall in the 2020 draft. He was a one-man wrecking ball in a recent win over the Bills, with 10 catches for 193 yards. He’s broken 100 yards in six-of-10 games this season and broken 145 in three of them. Even when he’s covered Cousins isn’t afraid to put the ball up and give his receiver the chance to come down with it, and often that’s just what Jefferson does. The Patriots have yet to face a big, athletic threat at wide receiver with the kind of talent that Jefferson has. They’ll hope to keep him from doing any griddy’ing in the end zone. He’s battling a turf toe injury that could limit him a bit, especially with the short week’s rest.

Cook is the centerpiece of the Vikings rushing attack that ranks 24th in yards and 12th in DVOA, but he remains one of the best and most dangerous backs in the league. He has 799 rushing yards, a 5.1 yards-per-attempt average that is the best of his career and six touchdowns while also tacking on 22 catches and a receiving touchdown. His 81-yard touchdown run against the Bills was the longest of his career as Cook is a balanced and explosive back who can score from anywhere on the field. The Patriots run defense has been on fire in recent weeks but Cooks presents a high-quality challenge in a number of different ways.

With the Patriots issues along the offensive line, blocking Smith is one of the scariest and more important propositions for this matchup. With 9.5 sacks, Smith is back on track after a lost final year in Green Bay. He posted double digits sacks in 2019 and 2020 and is on the verge of getting back to that level. He also leads the defense with 38 total hurries as the big outside linebacker has been a disruptive force. Gettting him blocked is a high priority if the Patriots offense is to find any success.

On the other edge is a similar problem player, Danielle Hunter, who has six sacks and 30 hurries himself. Hunter is also PFF’s highest-graded defender on the Vikings. Most often Hunter works from the defensive left while Smith works on the defensive right, lining up matchups as Smith on left tackle Trent Brown and Hunter taking on Cajuste at right tackle. Protecting the edges of the defense will be a huge key. The secondary of the Vikings can be attacked but not if Mac has no time to step up in the pocket and deliver the football.