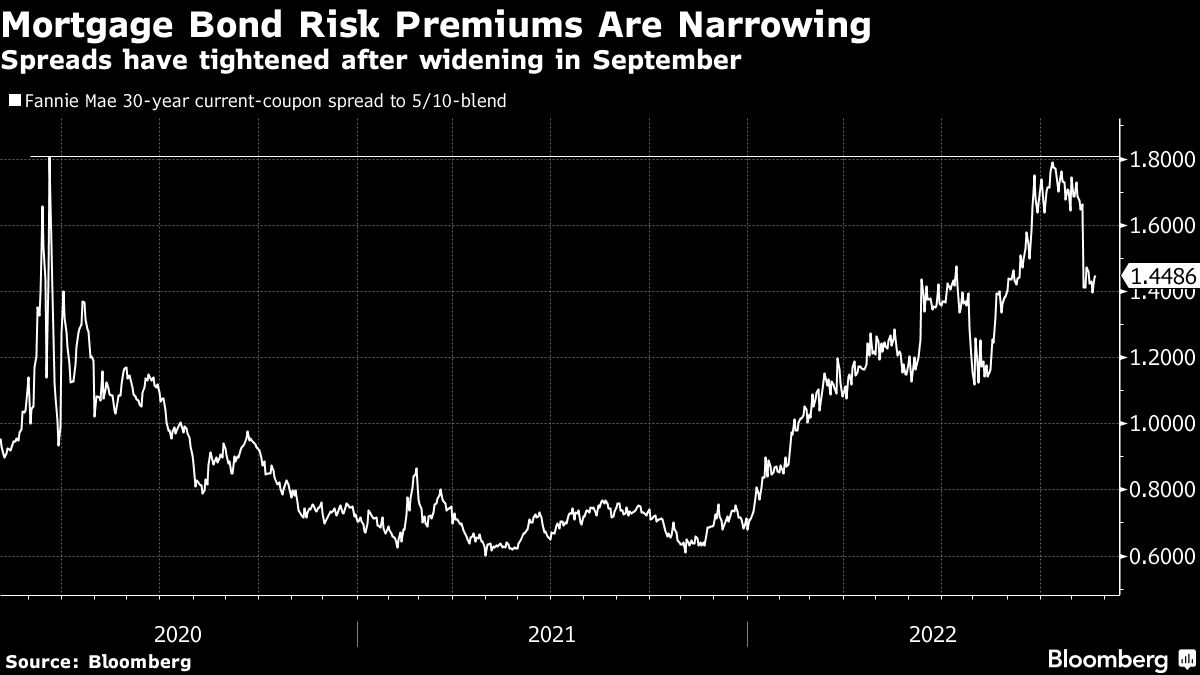 (Bloomberg) — Mortgage bonds are close to the cheapest they’ve been since the financial crisis by some measures, and money managers like Pacific Investment Management Co. are betting that prices have fallen far enough to make the securities a great buy now.

Most Read from Bloomberg

Investors including DoubleLine Capital, Vanguard Group and Morgan Stanley Investment Management are also piling into the debt from US-backed entities like Fannie Mae and Freddie Mac. TCW Group views the bonds as one of the firm’s highest-conviction investments now.

They’re drawn by an unusual shift in the bonds. Mortgage backed securities usually get hit particularly hard by unexpected changes in interest rates, which change how often consumers refinance their home loans and how quickly investors get their principal returned to them. That sensitivity is known as negative convexity, but it’s all but disappeared for now, because home loan rates have surged and most homeowners are far from being able to refinance and prepay their loans.

“Homeowners are unlikely to refinance their mortgages given the unprecedented rise in interest rates in a short period of time,” Dan Hyman, manager of the $6.4 billion Pimco Mortgage Opportunities and Bond Fund, said in an email. “That means prepayment risk – something unique to the securitized market and a reason why these bonds typically yield more than U.S. Treasuries – is highly predictable.”

That kind of predictability may be why mortgage bonds jumped 2.5% on Nov. 10, their biggest one-day gain since June 1988, after a government report showed inflation cooling, and have risen about 5% since late October according to Bloomberg index data.

Even with these gains, risk premiums on the bonds are close to their widest level in a decade, excluding the early part of the pandemic. The gap between the 30-year Fannie Mae current coupon yield and a blend of five- and 10-year Treasuries was about 1.4 percentage point on Monday, and was as wide as nearly 1.8 percentage point in mid-October. That’s also part of why money managers have been buying.

Laird Landmann, co-director of fixed income at TCW, said now is the best buying opportunity since the global financial crisis, when the bursting of the mortgage bubble resulted in outsized returns for investors willing to be contrarians.

“It’s setting up to be very attractive,” Landmann said in an interview at TCW’s Los Angeles headquarters. “Seasoned residential real estate debt is like gold.”

To be sure, mortgage bonds face potential difficulty in upcoming months. The Federal Reserve used to be the biggest buyer of the securities, but this year it has effectively stopped purchasing. It holds $2.67 trillion of the bonds in its portfolio, out of a market that is about $8 trillion.

With the biggest buyer effectively out of the market, it’s not clear who will step in now, Bloomberg Intelligence analyst Erica Adelberg said. That can weigh on prices for the securities. And at some point, the Fed may look to sell down its holdings, which would weigh on the bonds even more.

“Mortgages have been hit on all fronts,” said Brian Quigley, senior portfolio manager at Vanguard, in a phone interview. “The Fed has stepped back, there’s a historic rise in rates that we haven’t seen for decades and a post-’08 record spike in volatility.”

But it’s unlikely the Fed would deliberately flood a market with bonds when it’s already beaten down, according to Vitaliy Liberman, a portfolio manager at DoubleLine. The DoubleLine Total Return Bond Fund had about 80% of its $35 billion portfolio in residential and commercial mortgage-backed securities as of Sept. 30, including both agency and non-agency holdings.

“If I had to allocate my own money, agency MBS makes sense,” Liberman said.

Some investors — in particular fund managers — are getting interested in buying again. For example, Vanguard has been buying mortgages and is now somewhat overweight, said Quigley.

Another positive for the securities now is that issuance of new mortgage bonds is likely to fall in the coming months as higher rates cut into home purchases. BMO Capital Markets forecast that total sales of fixed-rate mortgage bonds by entities like Freddie Mac and Fannie Mae would fall almost in half next year to around $300 billion from an estimated $550 billion in 2022.

That could help boost bond prices, especially in the coming months which tend to be seasonally slow for home purchases, said Andrew Szczurowski, a portfolio manager at Morgan Stanley Investment Management who specializes in MBS. The asset manager is overweight higher coupons and one of its funds has the largest allocation to agency MBS in nearly a decade.

“Higher coupons still look incredibly cheap to us, despite the rally,” Szczurowski said. “We continue to add.”

Investors looking to gain exposure to mortgage bonds can buy the securities directly, but can also buy exchange traded funds or real estate investment trusts tied to mortgage bonds. The REITs often borrow money to buy more mortgage bonds, potentially magnifying any gains they generate. That’s attractive to Bill Gross, the retired co-founder of Pimco, who has been buying mortgage bonds for decades.

“Mortgage REITs like Annaly yield 16% and their book values go up if spreads tighten — sort of a double play,” Gross said last week, referring to Annaly Capital Management. “I like MBS as an equity play.”

Although the bonds have gained in recent weeks, they have more recovery ahead of them, and look better than other securities like high-grade corporate bonds or Treasuries, according to Harley Bassman, managing partner at Simplify Asset Management, and a former portfolio manager at Pimco.

“You didn’t buy the bottom? Get over it. They’re still good,” Bassman said.

Japan’s Rakuten launched the sale of $500 million of two-year notes yielding 12% in a generally quiet day for company debt sales.

France’s Valeo is offering a spread of about 320 basis points on a new euro sustainability-linked 4.5-year debt sale Tuesday, a far chunkier premium than what it’s set to pay on a concurrent Schuldschein deal.

Sunac China Holdings struggles to get investors on board with a preliminary offshore-bond restructuring plan underscoring the challenges Chinese developers face in navigating the fallout from an unprecedented debt crisis.

Most Read from Bloomberg Businessweek