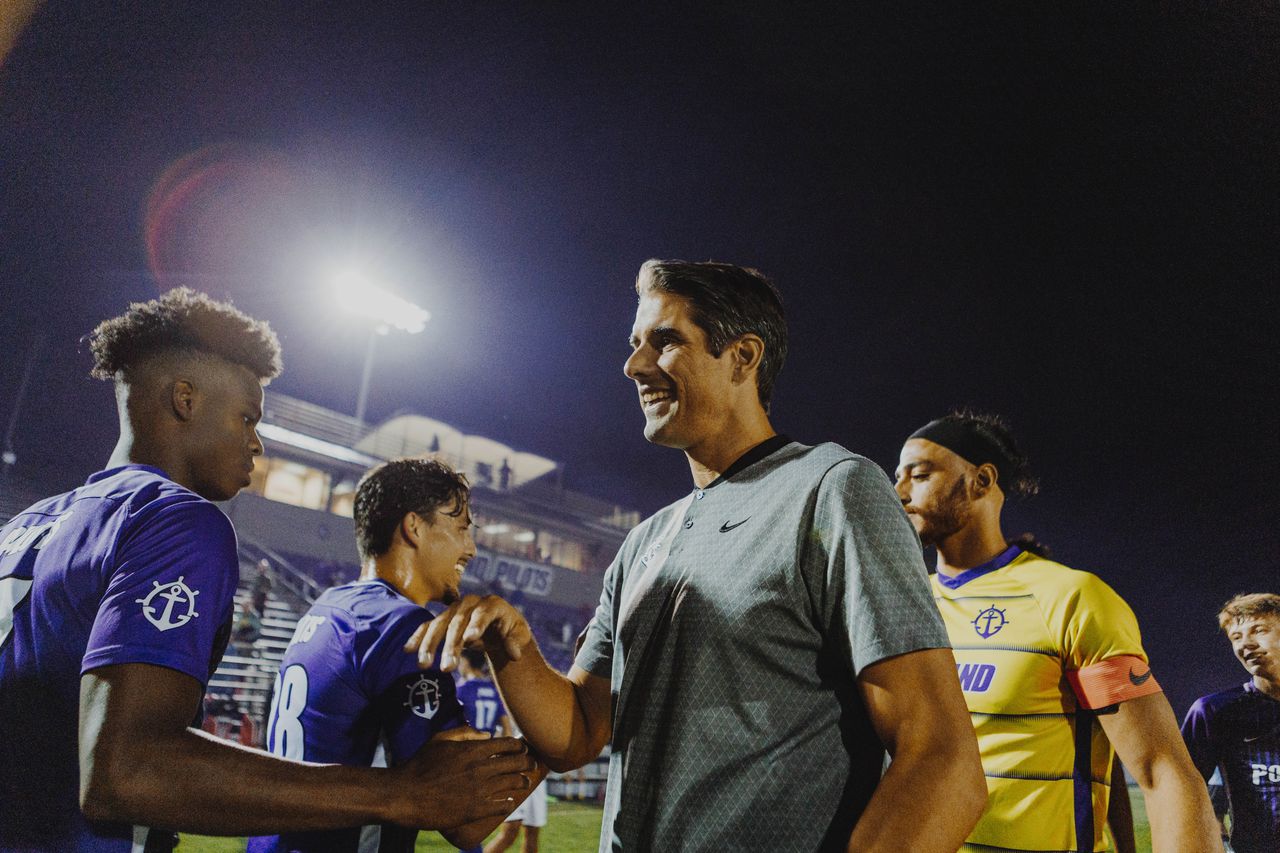 KALAMAZOO, MI – Despite being located more than 2,000 miles west of Michigan, the University of Portland men’s soccer team has a surprisingly large fan base in Kalamazoo.

That’s because the Pilots are led by seventh-year head coach and Kalamazoo native Nick Carlin-Voigt, which provides some added intrigue to Portland’s NCAA tournament Sweet 16 matchup with Western Michigan.

“Kalamazoo is home for me,” Carlin-Voigt said. “My mom and dad both live there and my siblings, and I’m a proud Michigander… Spent 21 years of my life in Southwest Michigan and Kalamazoo, and it’s home, and I love Kalamazoo. Great memories, great community there, where a lot of people helped raise me and a lot of people exposed me to the game.”

“Ultimately, I committed to Kalamazoo College due to two to three factors: the quality of a private school education; the location to home because I was raised by a single mom, who I’m really close to and family I’m really close to, so I wanted to stay closer to home; and three, the opportunity to play two sports in college,” Carlin Voigt said. “I wasn’t ready to give up basketball, and the opportunity to play basketball, which I did for my first two years at K-College. Then, the starting goalkeeper position came open, and we had a really good team that I walked into and were top-10 in country.”

Carlin-Voigt had pro soccer aspirations after graduating from K-College, but a knee injury ended his high-level playing career.

“I wanted to stay in the game, and I was lucky enough go to a coaches convention and saw 10,000 people doing this as a profession, and teaching was something I was very interested in, and coaching is teaching and then leadership, so I got into coaching at a very young age once my playing career had ended at 23,” he said.

Prior to taking over Portland’s program in January 2016, Carlin-Voigt spent four years as an assistant at UCLA, five years at George Mason and one season on the staff of the Wisconsin women’s soccer program.

He led Portland to the NCAA Tournament in his first year with the Pilots and led them back to the 48-team field in 2018 and 2021, but had never made the Sweet 16 until they upset eighth-seeded Oregon State, 2-0, on Sunday.

Shortly after that second-round contest went final, Carlin-Voigt received an influx of messages from family members, many of whom have split their allegiances between Portland and Western Michigan, which is the alma mater of his mother, Patricia Carlin, and his wife, Dr. Marin Henderson-Posther.

“My mom is the oldest of eight, and they’re all in Michigan, so I have a huge family in Michigan and a lot of converted Pilot supporters,” he said. “There were a lot of watch parties (Sunday night) back in Michigan, and they were really happy for the program, but also our family.

“My wife is a Western Michigan grad. My mom went to Western Michigan and has her undergrad and a master’s degree from there…. We’re always wishing the best for the community that Marin and I grew up in, and a lot of people are reaching out and are happy that we advanced.”

What separates this year’s version of the Pilots from the program’s previous tournament teams is the camaraderie and ability to overcome in-game adversity, Carlin-Voigt said.

“I think this team is a veteran group; they’re mature, and they really love playing for each other,” he said. “They are playing for a bigger cause than themselves, and they’re a gritty group, as well. They’re able to overcome adversity. We’ve been able to score goals in different ways and win games in different ways – sometimes with the lead, sometimes coming back – and we really challenged ourselves with a tough schedule… I think we’ve played some of the nation’s best programs, and we’ve found ways to get results and earn those results. I think when you do that over time, it gives you confidence and belief.”

WMU is another team that is playing with a ton of confidence and is unbeaten in its last eight games, including a Mid-American Conference Tournament title upset win over Akron and NCAA Tournament victories at Louisville and ninth-seeded Lipscomb, which have the Broncos as the only remaining team to win on the road in Rounds 1 and 2.

“We’re extremely confident,” WMU senior forward Mike Melaragni said. “We feel as though we can beat anyone anywhere, and I think we’ve shown that in these last four games, where we’ve gone on the road and got a result in every single one of them against a big ACC team like Louisville and against a top-10 team in Lipscomb. We can take care of business on the road, and that’s not something we’re scared of at all.”

WMU will be competing in its second Sweet 16, with the last one coming in 2017, when the Broncos saw their season end with a 2-1 loss at Michigan State.

Broncos’ head coach Chad Wiseman also led that team and said the message he’s conveying to his team is to make sure they enjoy the opportunity that comes with being one of the last 16 teams standing.

“I think first and foremost, they need to enjoy the moment and the experience we’re going through,” said Wiseman, who played at WMU from 1998-2001. “I tell every kid I recruit that my goal is for you to have a better experience than I had as a student-athlete, and I think with this group, we’re probably executing that pretty well right now, but they have to enjoy it. They work really, really hard, so you have to make sure that you enjoy the highs, too.

“…I’m extremely proud to be their coach and continue to help them work toward their ultimate goal, and make no mistake about it – we fully expect to go out to Portland, play an unbelievable game and advance to the Elite 8 with a ‘W’.”

Kickoff for the Round 3 NCAA Tournament game between the Broncos and Pilots is scheduled for 8 p.m. ET Saturday, and it will air on ESPN+.