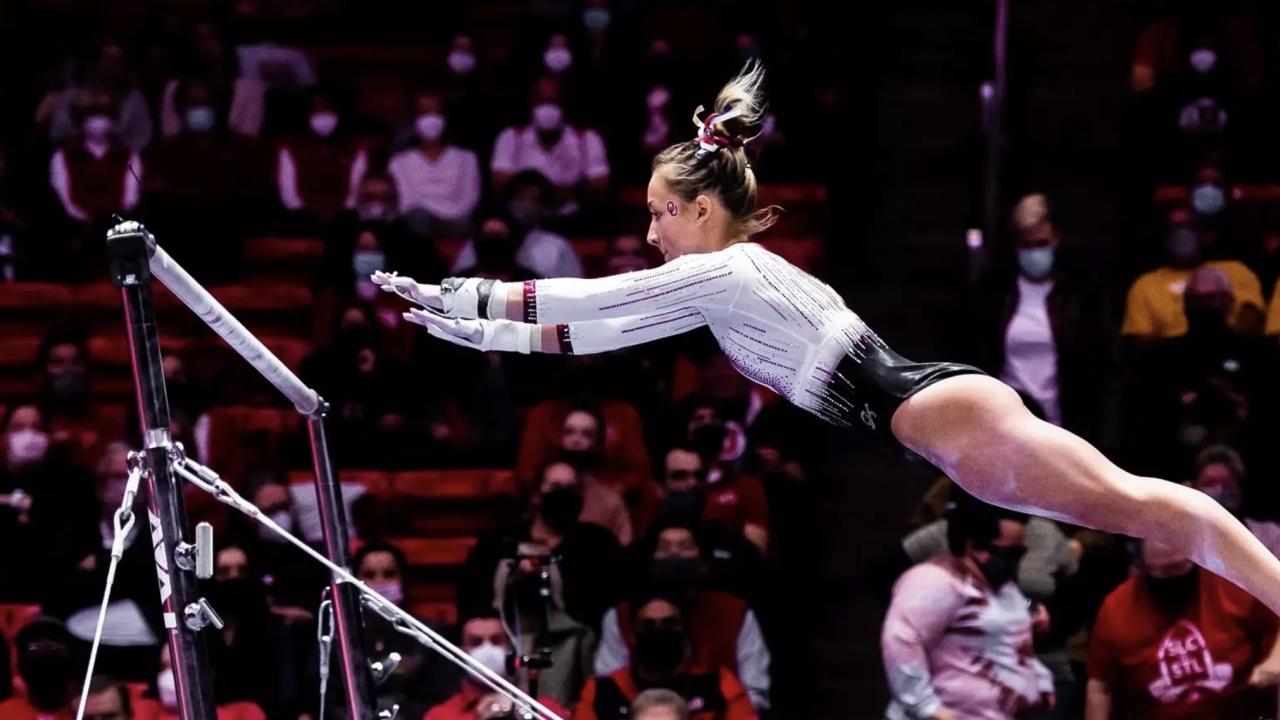 After eight long months without an NCAA gymnastics meet, the new year and new season are finally underway! Reigning champion Oklahoma is, once again, stacked with talent and seeking a repeat title. The Sooners will have no shortage of competition from the usual suspects as well as some teams on the rise, setting the stage for another ultra-competitive season.

Household names like Trinity Thomas, Sunisa Lee and Jordan Chiles are set to return along with dynamic freshmen and key returners who will surely have a say in how 2023 shakes out. Take a look at the top individuals and teams to watch heading into Week 1.

Like most events last season, vault was frequently a battle between superstars Thomas and Carey: The former snagged three perfect 10s while the latter never scored below a 9.900 in the regular season. Florida super senior Thomas gets the edge in Week 1 over newly minted world vault champion Carey, who only competed a Yurchenko full at Oregon State’s most recent intrasquad.

Michigan’s vault lineup was nothing short of dominant in 2022 thanks in no small part to the ever-consistent Wilson. She was one of five Wolverines to notch a perfect 10 and hasn’t scored below 9.8375 since 2021. Despite its lower start value, UCLA junior Campbell’s Yurchenko full is consistently excellent: She’s never scored below 9.800 in her career and scored below 9.900 just once last season.

After LSU was eliminated from the postseason at regionals, Bryant missed the opportunity to defend her national title after being edged out on a tie-breaker by teammate Johnson. Both gymnasts looked better—and healthier—than ever at the Tigers’ Gymnastics 101 preview in December.

Honorable Mentions: It’s worth noting that reigning national champion Jaedyn Rucker’s comparatively low average and median scores from 2022 are largely due to her “go big or go home” approach to vaulting. She’s prone to the occasional miscue during the regular season but has an uncanny knack for pouring it on during the postseason. Similarly, Oklahoma sophomore Jordan Bowers is more or less guaranteed to break 9.900 when she controls the landing on her Yurchenko one and a half.

Freshman to Watch: There were only 51 vault scores of 9.9-plus during the 2022 level 10 season, and five of those belong to UCLA’s Selena Harris—the No. 1 recruit in the class of 2022. Her debut at Meet the Bruins certainly lived up to the hype.

Davis has come so close to perfection so many times in the past two seasons, but her double front half out often left the door open for the judges’ interpretation. Now that her dismount is looking even better than ever, expect that door to slam shut in 2023.

As an elite, Carey is known for her high level of difficulty on vault and floor, but college has allowed her impeccable execution to shine on bars. She and Davis each earned a share of the bars silver at the 2022 national championships, and she’s looked better than ever in the preseason so far.

Bars was Thomas’ weakest event in 2022, relatively speaking, which is to say she had more than one score under 9.900 and “only” scored one perfect 10 en route to winning the national title. If her routine at the Gators’ December Hype Night is any indication, she’s gunning for a repeat.

After announcing that this will be her final season competing for Auburn before making a full-time return to elite, Lee has been teasing unreal combinations in training but stuck to a clean and comparatively simple set at the Tigers’ preview meet.

Blanco and Worley were two of the top bar workers in the nation last year: Blanco with her execution and easy swing, and Worley with her toe point and always-stuck dismount. Both should anchor lineups and pull in top-10 averages—if not a few perfect 10s—all season long.

Honorable Mention: Leanne Wong was somewhat lacking in consistency on bars during her freshman season at Florida, though her scoring ceiling was literally perfection. In the offseason, she won the elite national bars title and helped the U.S. win the team gold medal at the world championships, both of which bode well for her 2023 prospects.

Freshman to Watch: Like Carey, Florida’s Kayla DiCello has established herself as a top elite gymnast largely on the strength of her power events. However, bars is where she’s most likely to make an immediate impact for the Gators.

Thomas rebounded from an iffy beam record in 2021 to be absolutely unflappable last year with only one score below 9.900. She and the Gators were excellent, but Utah was the beam team to beat with O’Keefe and her three perfect 10s leading the charge. Surprisingly, the two-time NCAA champion (bars, floor) has yet to win a title on her signature event; she’ll be looking to remedy that in 2023.

Missouri’s Schreiber tends to fly under the radar—an occupational hazard of being in the same conference as some of the sport’s highest profile athletes—but is one of the most reliably stellar beam workers in the country: She hasn’t scored below a 9.875 in nearly two years, and earned the Raleigh regional beam title and shares of second place at both the SEC and national championships in 2022.

Reigning NCAA beam champion Lee was quite literally hit or miss in her first collegiate season, but she’s practically unbeatable when she does stay on. Her teammate Groth is also excellent, earning a remarkable eight 9.950s and two All-America honors in her freshman campaign.

The 2019 NCAA champion Wojcik is best known for her outstanding beam work, providing welcome poise and stability to a somewhat erratic Michigan beam lineup. Unsurprisingly, she won the event at the team’s December preseason quad meet.

Honorable Mention: Consistency queen Carey isn’t necessarily renowned for her beam work, but the sophomore scores as well on beam as she does on every other event, making her a threat every time she salutes. Carey was a 9.9-machine on beam last season—dropping into the 9.8s just twice—and notched a near-perfect 9.975 on several occasions, including at regionals.

Freshman to Watch: Former elite Faith Torrez snagged five scores over 9.900 in her final level 10 season, including two perfect 10s—a rarity in club competition. Oklahoma consistently boasts one of the best beam lineups in the country, and there’s a strong argument to be made for Torrez to anchor it. 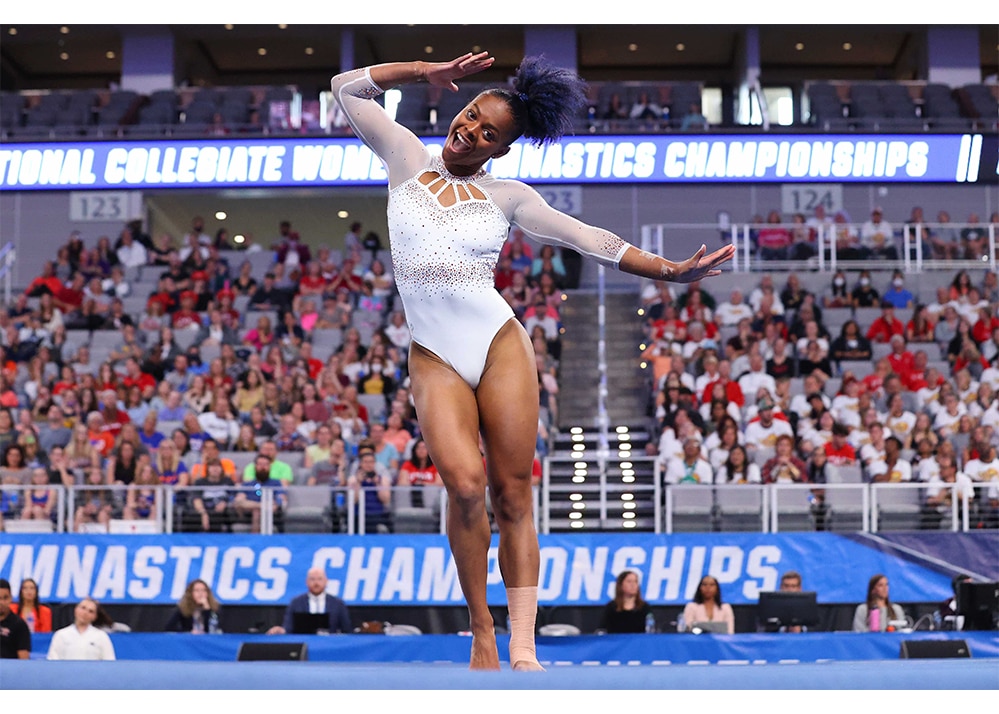 Floor was arguably the most competitive event of 2022, with 11 gymnasts scoring at least one perfect 10 and a whopping 51 averaging 9.900 or higher. Hooten, Carey, Wilson and Gobourne all scored multiple 10s while Hooten, Brooks, Carey and Wilson never scored below 9.900.

Even in such an exceptional field, Thomas was peerless: She scored a perfect 10 seven times, including four consecutively in the postseason.

Honorable Mentions: UCLA sophomore Jordan Chiles is literally world-class on floor and has the hardware to prove it after winning bronze at the 2022 U.S. championships and later edging out Olympic gold medalist Carey for silver at Worlds. Another one to watch is her teammate, Chae Campbell. The junior is undeniably one of the best performers in the NCAA but was still honing the technical elements of her routine as of December’s Meet the Bruins.

Freshman to Watch: Stanford enters the season with the top-ranked freshman class, and Taralyn Nguyen is a big reason why there will be a lot of eyes on The Farm this year. Nguyen’s power and difficulty on vault and floor have her set up to be a fixture on at least two events for the Cardinal. Floor is where the freshman should stand out most, where she’ll immediately threaten for 9.9s whether she opts for the double layout or the piked full-in she competed in her level 10 career.

Thomas and Carey dominated the all-around rankings last year, and 2023 is shaping up to be more of the same. It’s hard to imagine either gymnast improving on their record-breaking 2022 seasons, but we’re sure they’ll find a way.

If any other gymnast can challenge the phenomenal hit rates of Thomas and Carey, it’s Worley. We can’t overstate just how good the Kentucky senior is: She’s competed as an all-arounder in all but three meets during her collegiate career and has only fallen once. Her scores have steadily trended up since her freshman year, and there’s no reason to think this year will be any different.

Utah’s McCallum was the definition of high risk/high reward in her freshman season. She’s replacing the unwieldy Servante vault she competed last season with a much more reliable-looking Yurchenko one and a half, and her scores will presumably trend closer to “high reward” as a result.

Bryant struggled with plantar fasciitis last year, but her scores were among the best in the nation when she was able to compete in the all-around. LSU head coach Jay Clark says that Bryant is healthy and anticipated to be a key four-eventer for the Tigers in 2023.

Honorable Mention: It’s not yet clear when or even if we can expect to see Olympic champion Lee in the all-around this season (she stuck to bars and beam only at the Auburn preview meet, and recent training video on vault has been sparse). If she does end up on all four events, though, she can absolutely challenge for the top score.

Freshman to Watch: Michigan State freshman Nikki Smith followed up her victory at last season’s prestigious Nastia Liukin Cup by winning the all-around, vault, bars and beam titles at the 2022 level 10 national championships. As a member of the up-and-coming Spartans, Smith is poised to be a key contributor on all four events right out of the gate.

The Sooners haven’t ranked lower than third at the end of the season since 2013, and it’s a fairly safe bet that they’ll look ready to defend their national title straight out of the gate in 2023. Head coach KJ Kindler retained all but a few routines from her championship squad in 2022, and with a talented freshman class capable of filling those holes immediately, Oklahoma shouldn’t skip a beat.

Ten years after winning its first national championship, Florida will be in the thick of things yet again with a roster loaded with world-class talent. However, that’s also been true the last several years when the Gators have repeatedly come up short. All eyes will be on fifth-year Thomas as she hopes to cement her status as one of the all-time greats with the only significant accolade missing from her résumé being an NCAA team title.

The Utes haven’t finished lower than fourth this decade, and now that sophomore McCallum has a year of experience under her belt, she may very well lead Utah to a top-two finish. Michigan, who still has most of the talent from its 2021 NCAA championship on its roster, will be out for revenge after a shaky semifinal spoiled the Wolverines’ shot at a repeat.

Lee helped elevate Auburn from a nationals bubble team to a championship contender in just one season and is sure to keep the Tigers in the hunt for the title in her final NCAA campaign. Meanwhile, conference foe and perennial postseason threat Alabama is looking to rebound from a disappointing showing at nationals and a tumultuous offseason. Will new head coach Ashley Johnston and the second-ranked freshman class in the country be enough to help the Crimson Tide reclaim its status as one of the top two teams in the SEC?

Honorable Mentions: There’s a convolution of Tigers from the SEC in the NCAA championships picture this season, as LSU and Missouri—after its Cinderella run to the semifinals last year—have rosters capable of making waves. Another team coming off a strong 2022 postseason, Michigan State, is also worth keeping an eye on in the Big Ten and nationals race along with California from the Pac-12.