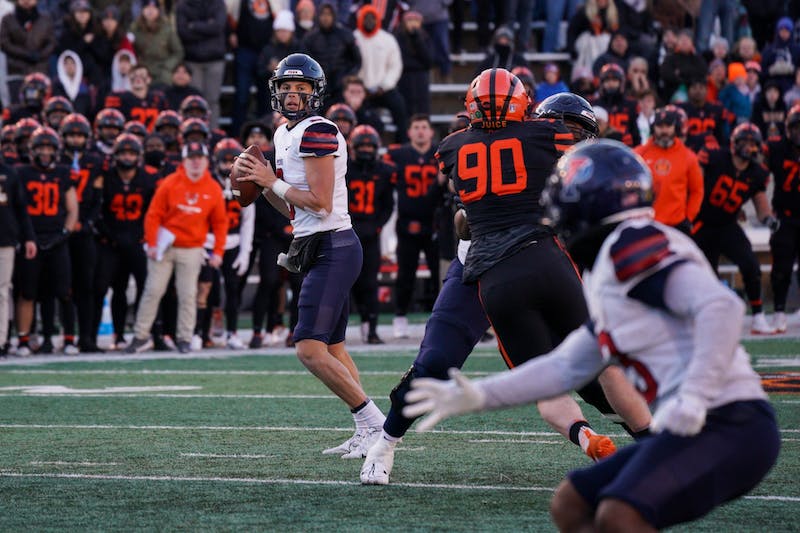 The team defied expectations at Princeton and this entire season, winning five more games than it did last year

PRINCETON, N.J. — Perhaps it was too sunny on Saturday afternoon in Princeton for the stars to align for Penn football, but the team’s future is decidedly bright.

Needing to beat the Tigers and needing Harvard to take down Yale, the Quakers held up their end of the bargain, but they couldn’t be in two places at once — although if they could have, they probably would’ve taken down the Bulldogs, too, with the way they played.

Although on paper many would think the win would be bittersweet, the team celebrated on the field like it had just won the Super Bowl. While the team would have liked to take home the Ivy title, the message I heard from players and coaches was how happy they were with the improvements they had made compared to last year and all of the expectations it had defied along the way — including the DP’s.

At the end of the day, the season was a great success — nobody outside of that locker room expected this team to win eight games this year, especially after a season last year where it went 3-7, parted ways with its offensive coordinator, and fielded calls to fire its head coach.

No such calls will be made this offseason, in fact many could argue he deserves a raise. The team won five more games than it did last year, was the only squad in the Ivy League to beat Yale, and was palpably more cohesive and displayed more trust than it has in years.

So what changed in one short offseason?

A lot of seniors stepped up in their final season, the pass rush — and entire front seven — was tenacious, and both sides of the ball performed well in clutch situations. But if I had to pinpoint one thing, it would be the hiring of offensive coordinator Dan Swanstrom.

Under him, the offensive line created countless open holes, the team’s young quarterback made strides, but most importantly, the team scored seven more points per game than it did last season — this was especially huge for a team that played in five one-score games this year.

It’s a cliche, but the win on Saturday was truly a microcosm of the team’s season — and its future.

At Princeton, the team won as 11.5-point underdogs, performed well in the clutch, and a freshman special teamer — Francesco Barone — made one of the plays of the game, showing that the future is bright.

Although it was confirmed after the game that the win for the Quakers will indeed be the last for a few key seniors — including linebacker Jake Heimlicher, running back Trey Flowers, and wide receiver Rory Starkey, Jr. — coaches and players emphasized that the foundation is strong and that there are young players ready to adroitly fill their roles and build on this season’s success.

Get our newsletter, The Daily Pennsylvanian, delivered to your inbox every weekday morning.

Asked postgame what he saw in his future with the Red and Blue, Barone simply replied, “Three rings.”

Coming off its best season in years, I think Barone is right that there is more in store. The coming seasons should be exciting for the fans, rewarding for the players, and profitable for the team’s jewelry manufacturer of choice.

BRANDON PRIDE is a Wharton senior studying finance from Morgan Hill, Calif. who was a Senior Sports Editor for the 137th Board of Editors. His email is bpride@wharton.upenn.edu.